Share All sharing options for: Tigers 4, Royals 2: Drew Smyly and Delmon Young lead Tigers to the promised land of .500

The Detroit Tigers reached the .500 mark for the first time since mid-May, beating the Kansas City Royals 4-2. Drew Smyly (4-3) gained the victory, striking out 10 in a solid 6 inning performance. Jose Valverde pitched the 9th for the Tigers, posting his 16th save. Jonathan Sanchez (1-5) took the loss for the Royals, allowing 4 runs in 5 2/3 innings.

The Tigers gave Smyly a lead to work with in the 3rd, as Berry continues to fill the Brandon Inge sized hole in all of your hearts. Ramon Santiago and Austin Jackson hit back to back singles to set the table. Berry cleared it, hitting a long fly ball that fell in Comerica Park's death valley, deep right center field. When the running stopped, Santiago and Jackson had scored and Berry was standing on 3rd with a 2 RBI triple.

Smyly was outstanding through 4 innings, allowing only 1 hit while setting a career high in strikeouts with 9. But then came the 5th.

After Mike Moustakas tripled with one out, there was an injury scare. Smyly called out trainer Kevin Rand due to some sort of issue with his right side. You could here the cries of "NOOO! IT'S AN OBLIQUE!" all over Tiger Nation.

As Kurt tweeted via @BlessYouBoys during the injury time out...

Thankfully, Smyly remained on the mound (Post game, Jim Leyland called it a cramp). But after he served up a single to number 8 hitter Brayan Pena to score Moustakas and a double to number 9 hitter Jason Bourgeois, whch brought home Pena to knot the game at 2 all, you had to wonder if the side issue wasn't affecting Smyly. But the more likely reason was Smyly tiring in Detroit's sauna-like heat, extra base hits usually come in bunches against the lefty, and the opposition has normally started to figure the rookie out by the 5th. So take your pick.

With Delmon Young getting the start in left, you knew Dr. Strangeglove would make an appearance sometime during the game. If you had the top of the 6th, you won the pool!

Smyly remained in the game, got 2 quick outs in the 6th, including his 10th (!!!) strikeout. Then came trouble. Ryan Raburn got to Butler's slow roller up the middle, but kicked it toward short. It was a tough play, and correctly scored a single. Yuniesky Betancourt followed with a fly to deep left. Everyone at Comerica held their breath as Young broke back. He got his glove on the ball, dropped it, then ran into the wall. All on a ball most MLB left fielders would have hauled in. Luckily, Butler wasn't running hard, and could only get to 3rd on what was scored a gift double. With runners and 2nd and 3rd, Smyly got out of the inning on his career high106th and final pitch, Moustakas grounding out to Fielder.

Dr. Strangeglove made up for his defensive shortcomings in the next half inning.

Prince Fielder led off the bottom of the 6th with a single, then rode home on Young's 8th home run of the season. The no-doubt shot deep into the left field seats (off a pitch out of the strike zone, natch) gave the Tigers a 4-2 lead and Smyly a chance at a win. Delmon, if you would hit like that more than just occasionally, your stone hands might be forgiven.

With Smyly having reached his pitch limit, Jim Leyland went to the pen in the 7th. It was by the book, in a good way.

Brayan Villarreal and Phil Coke combined for a scoreless 7th. Joaquin Benoit tossed a 1-2-3 8th.Jose Valverde came on for the save...and 3 batters later, the Big Potato was dancing to the tune of a .500 record. All that was missing was Todd Jones pointing at the sky after reaching .500...back in the days we'd rather not talk about.

The Tigers are still far below where we want and expect the them to be. But after all the adversity (some self-inflicted), reaching .500 was a badly needed baby step. Let's never talk of the ridiculousness of getting to .500 again.

There was an uproar well before the game even started. All it took was the release of Jim Leyland's unorthodox lineup, featuring Quintin Berry in RF, Delmon Young in LF, Ryan Raburn at 2nd, Ramon Santiago getting his second career start at 3rd, and Miguel Cabrera with a rare appearance at DH. As expected, a social media meltdown commenced.

Despite the cries for, well, something or other (firings, heads on a pike, death and destruction), on Twitter and Facebook from the fan base, apparently Leyland knew what he was doing. Young hit a 2 run bomb, Berry tripled home 2 runs, Santiago singled twice and made a nice defense play (after moving to 2nd), Raburn doubled and walked, Cabrera had 2 hits and no one was given a error (wink, wink, nudge, nudge).

We're Tigers fans, overreacting is what he do best in 2012.

Screen cap of the night:

Jim Leyland's eye rolling response after being asked about reaching .500. 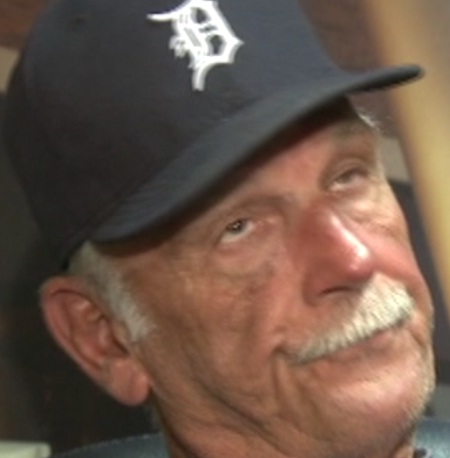 In case you were wondering:

The Bless You Boys Podcast is taking the week off, due to vacations and the weather Gods cutting off power to BYB Podcast HQ. Here's the direct link to this week's 1 minute long podcast. One more thing, I want to thank everyone to making BYB Podcast 46 our most listened to show ever!

Drew Smyly: The 2 runs allowed was least allowed by Smyly since May 9th, when he allowed 1 run to the Mariners. After that appearance, Smyly had a 1.59 ERA. He then became just another back of the rotation guy...until tonight, with a fine stat line of 6 IP, 6 H, 2 R, 10 K.

Delmon Young: 2 games, 2 big home runs. What Dr. Strangeglove tries to give away with his glove, Delmon takes back with his bat.

Quintin Berry: Only had 1 hit, but it was huge.

No way. Not on a night when the Tigers reach the 500 mark! YES! BREAK EVEN BABY! AWESOM...uh, lets not get carried away.

GAME 83 PLAYER OF THE GAME: