It was an ugly beginning for Fister, who was, as the cool kids like to say on Twitter, BABiP'ed early on. Escobar laid down a perfect bunt single with 1 out. Hosmer followed a ground ball up the middle and into center. With 2 out, Tiger Killer Billy Butler's ground ball found the hole in the right side, scoring Escobar. Moustakas had the first hard hit ball of the inning, a line single scoring Hosmer, giving the Royals a 2-0 lead.

Down 2 runs, Prince Fielder evened the game up post haste. After Austin Jackson's lead off single, Quintin Berry laid down a sacrifice bunt, moving him to 2nd. With 2 out, Fielder said, "Screw the damn small ball!" crushing a long home run over the 365 mark in right center.

The Royals threatened in the 2nd, as the Tigers' defense forced Fister to get 5 outs. With 2 out, Alex Gordon doubled off the glove of Berry. He made a diving attempt, but the ball hit the heel of his glove. Escobar then hit a hard smash down the 3rd base line, Miguel Cabrera making a nice diving stop, but his throw pulled Fielder off the bag. Both were plays good defensive teams make...and we know the Tigers aren't. Despite the extended inning, Fister got out of trouble, Butler grounding out to short.

Allowing 2 runs and needing 44 pitches to get through 2 innings, there were cries of "What's wrong with Fister?" from Tigers fans. As it turned out, nothing.

The Tigers gave Fister a lead work with in the 3rd, the bottom of the order coming through with 3 runs off of Chen.

Leading off, Jhonny Peralta hit line smash off the wall in left, just missing a home run. Peralta smartly thought better off running on Gordon, settling for a long single. Ramon Santiago followed with a double, sending Peralta to 3rd. Gerald Laird then hit a fly ball to medium right center that looked very catchable, but somehow fell for a double between Jarrod Dyson and Jeff Francoeur. Peralta scored on the hit, Santiago rode home on Dyson's throwing error. G$ couldn't have walked the ball into the outfield and placed it any better.

The Tigers extended their lead to 6-2 in the 4th. Santiago lead off with his 2nd double of the afternoon. The Tigers proceeded to load the bases, Laird drawing a walk and Jackson singling for the 2nd time. Nate Adcock replaced Chen to face Cabrera, who hit a sacrifice fly to left. But Laird ran the Tigers out of the inning. Anticipating the throw going through to home plate, G$ was an easy out at 3rd when Hosmer cut off Francoeur's throw.

Fister gave back a run in the 5th. Moustakas' fly ball just clearing the right field wall, the solo homer making it a 6-3 game. Ryan Rabrun added some unintentional comedy by losing his glove in a crack in the wall.

The Royals crept closer in the 7th, an inning Jim Leyland channeled his inner LaRussa. Fister walked lead off man Escobar, which brought Leyland to the mound. The Marlboro Man decided 94 pitches in the sweltering Detroit heat was plenty from his starter. Darin Downs got the call, striking out the one batter he faced. Then came Brayan Villarreal. Escobar stole 2nd, went to 3rd on Butler's dying quail single, scoring on Hosmer's sac fly. Phil Coke ended the rally by striking out Moustakas.

The Royals were slowly chipping away at the Tigers' lead. Fans were getting a little nervous...until Delmon Young came to the rescue!

With Cabrera on base after an error, Young yanked an Adcock pitch into the bullpen in left. The 2 run shot gave the Tigers a much more comfortable 8-4 lead.

After Joaquin Benoit had another dominant appearance, a 1-2-3, 2 strikeout 8th, Jose Valverde took over in a non-save 9th inning situation. He immediately loaded the bases, 2 runs scoring on Butler's single. Betancourt just missed a home run, Jackson running down his fly ball on the left center warning track for the 1st out of the inning. Jackson made an excellent running catch for the 2nd out, turning what looked like a Moustakas single into a sac fly.

Francoeur faced the Big Potato with 2 out and the game tying run on base. Pinch runner Jason Bourgeois made the situation even more gut-wrenchingly tense, stealing 2nd. But Papa Grande ended the day on a happy note, striking out Francoeur.

Cue Potato dancing, a 4 game winning streak, the Tigers moving to 1 game over .500, and within 4 1/2 games of the 1st place Chicago White Sox. Let's hope the Tigers are done flirting with .500 and are movin' on up to the east side top of the AL Central standings.

This is just how I hoped the Tigers would end the 1st half, on a tear. A 5 game winning streak at the break would sure sound good.

Screen cap of the day:

1st base umpire Bill Miller with the confusing call of the afternoon - He's SAF...OUT! 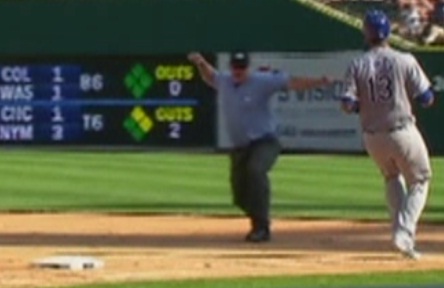 Gerald Laird: 3-3 with a pair of doubles. Is this enough for G$ to earn his first PotG victory?

Jose Valverde: To quote Allison on most every BYB Podcast, "Stop doing thaaaat!" The only folks happy with his performance are those who sell antacid and defibrillators.

Ryan Raburn: Getting his arm stuck in the right field fence was the rotten cherry on top of his 0-4 day.

The weather: After pushing (and sometimes exceeding) the 100 degree mark for the past several days, the heat wave in SE MI is finally easing up. The game time temp was a balmy 91 degrees.