Backed by 3 home runs and the arm of Max Scherzer, the Detroit Tigers easily handled the Kansas City Royals 7-1, sweeping their weekend series. The Tigers head into the All-Star break on a season high 5 game winning streak.

The victorious Scherzer (8-5) struck out 7 in 7 innings, allowing only 1 run. Everett Teaford (1-2) took the loss, allowing 5 runs in 4 1/3 innings. Jhonny Peralta (5), Delmon Young (10) and Prince Fielder (15) all went deep for the Tigers. Salvador Perez supplied the only offense for the Royals with his 4th home run of the season.

The Tigers' extra base hit barrage (12 hits total, 6 for extra bases) began in earnest in the 2nd. Brennan Boesch doubled with 2 out, setting up Jhonny Peralta. The Tigers' shortstop then yanked Teaford's shoulder high fastball over the left field wall. The 2 run shot was all the runs Scherzer needed, but the scoring didn't stop there.

After Perez drew the Royals within 1 by taking Scherzer yard in the 3rd, Delmon Young took action in the 4th. The smoking hot DH hit a monster fly ball over the 420 sign into the shrubbery in deep center,Young's 4th home run in as many games. The Tigers estimated Young's solo home run traveled 433 feet, give or take. I'd believe it...

In the 5th, Prince Fielder attempted to out do Young, and damn near did so. With Austin Jackson and Quintin Berry on base, Fielder absolutely crushed Tim Collins's pitch to the nether regions of right field. The now lopsided ball landed just short of the pavilion, giving the Tigers an insurmountable 6-1 lead.

Peralta tacked on another run for giggles in the 8th, doubling home Young, who had led off with a single. Now leading 7-1, the game was all but over, thanks to the Tigers' outstanding bullpen.

Scherzer was pulled after 7 highly effective innings, Jim Leyland handing the game to Phil Coke and Octavio Dotel. They did not disappoint, getting 6 straight outs to end the game and give the Tigers have a series sweep. Break out the brooms!

So where do the Tigers stand at the All-Star break in comparison to 2011? Out fearless leader Tweeted as much via @BlessYouBoys when the game ended:

As this post goes live, the 3rd place Tigers are only 4 games back of the 1st place Chicago White Sox, who are losing to the Toronto Blue Jays in the 6th. Considering all the injuries, drama and setbacks (too many were self-inflicted), 3 1/2 games back at the break sounds pretty damn good.

Up next? Monday's Home Run Derby featuring Fielder, and Tuesday's All-Star Game with the Tigers' big 3. The 2nd half starts Friday night in Baltimore, starting a streak of 29 straight games against .500+ teams.

Screen cap of the day: Young just missed running over 3rd base coach Gene Lamont in the 8th. I didn't know Lamont still had a little foot speed... 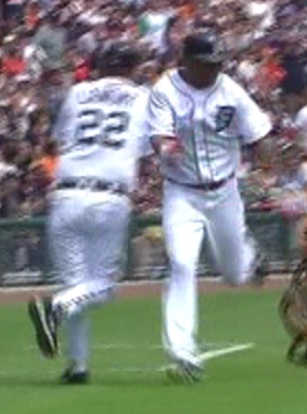 Jhonny Peralta: 3 ehxtra base hits, 3 RBI. 8 total bases is the most Peralta has had in a game this season.

Delmon Young: When he drills 4 home runs in 4 games, I can't leave Delmon off the ROAR list.

Thanks to 5 straight wins going into the All-Star break, with the team getting contributions from everyone, no hisses are needed or deserved.

GAME 85 PLAYER OF THE GAME:

In the closest PotG contest so far, Gerald Laird beat Austin Jackson by the narrowest of margins. The vote total was 172 to 166, 36% to 35%. G$ gets a hard earned victory. Kurt can now rest easy, G$ can be added to the PotG sidebar.