The Detroit Tigers clubbed 3 home runs in a 7-5 victory over the Boston Red Sox, salvaging the last game of their 3 game series and 9 game road trip. Rick Porcello (8-6) took the win for the Tigers, Jose Valverde posting his 21st save. Aaron Cook (2-5) was the losing pitcher for the Red Sox.

Miguel Cabrera (26), Prince Fielder (17) and Delmon Young (12) all went yard for the Tigers. Ex-Tiger Cody Ross led the Red Sox with 2 hits and an RBI.

After the wet debacle of last night, the Red Sox's 1st inning was not how I wanted the game to start. Lead off man Jacoby Ellsbury hit a ground ball down the 1st base line. Before Fielder could make a diving play on the ball, it hit the bag, bounded into right, and Ellsbury was standing on 2nd base when the dust settled. He then scored on an opposite field flair to right off the bat of Ross. Thanks to little fault of his own, Porcello found himself down 1-0.

But the Tigers' long-dormant offense stirred with 2 outs in the 4th, knotting the game at 1-1. After Quintin Berry was picked off 1str base on a bang-bang play, Fielder doubled off the Green Monster to keep the inning alive. Despite being drilled in the ear hole on a pick off attempt, Fielder shook off the cobwebs, rumbling home on Brennan Boesch's seeing eye single just past a diving Pedroia.

In the 5th, the question "Si or no" was correctly answered by both Cabrera and Fielder.

Austin Jackson singled, bringing home Avila. Berry's high hopping ground out scored Peralta. Yes, both runners who advanced via the bunt crossed the plate. I'll never agree with using the sacrifice bunt so early in the game, but I'm sure Jim Leyland would just point at the scoreboard in rebuttal.

Then the big men strode to the plate and destroyed Cook, ending his evening. Cabrera smashed a no-doubt 2 run home run high and far over the Green Monster. Fielder followed with a no-doubt shot of his own, a big fly over the wall in right center. The inning ended after 5 hits, 5 runs, 2 home runs, 1 Red Sox pitching change and the Tigers taking a 6-1 lead.

Porcello was pitching a gem of a game through 5, but ran out of gas in the 6th. The Red Sox loaded the bases with no one out on 3 straight singles. It looked like Porcello would get out of the inning without too much damage after Jarrod Saltalamacchia grounded into a 4-6-3 double play. But the 2nd run of the inning scored on a Will Middlebrooks single, ending Porcello's night semi-prematurely after 5 2/3 innings.

Phil Coke took over, and walked the first batter he faced. Not a good omen, especially when it's left handed, .226 hitting Paul Kalish. Right handed,.347 hitting Pedro Ciriaco made Coke play for his mistake with an RBI single, narrowing the Tigers' lead to 6-4.

For some unfathomable reason, Leyland sent Coke out to the mound to start the 7th. After falling behind in the count, Carl Crawford lined Coke's 3-2 fastball into the Red Sox bullpen, making it at 1 run game at 6-5. Octavio Dotel took over for Coke and easily set down all 3 Red Sox batters he faced. Figures...

Delmon Young got one of the runs back in the 8th, extending the Tigers lead to 7-5. Young tucked a fly ball just inside the right field foul pole for a 302 foot Fenway Park style home run off of former Tigers 1st round draft pick Andrew Miller. I believe he was involved in some sort of trade for a 3rd baseman, if I remember correctly.

With the final 2 innings on tap and holding a 2 run lead, the game was in the hands of Joaquin Benoit and Jose Valverde. Benoit has recovered nicely from his recent homer happy stretch, as shown by his 12 pitch, 1-2-3 8th inning. The Big Potato came on to close out the game in non-dramatic fashion, and for the most part, succeeded. With 2 out, Crawford battled Papa Grande in a long, 8 pitch at bat, but struck out to end the game.

Thank the Baseball Gods this crappy damn road trip ended on a up note!

Andrew Miller looks like he's been following the Grateful Dead. I never would have recognized him. 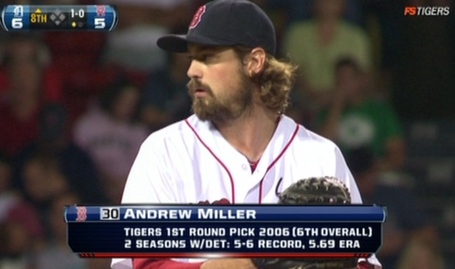 I still think having Cabrera in the Olde English D was not too bad of a trade-off.

This is where Cabrera's bomb ended up, ball is circled. 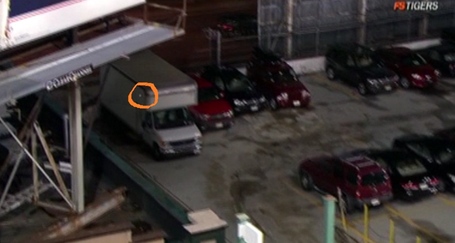 Delmon Young: His home run gave the Tigers a huge insurance run after Phil Coke pitched the Red Sox back into the game.

Miguel Cabrera: 2 hits, 2 RBI and majestic home run over the Green Monster. Let's not forget his nice defensive play in the 5th, either.

Prince Fielder: 1 of his 2 hits was also a long home run and he flashed a little the glove leather as well. All after getting his bell rung on the pick off attempt.

Rick Porcello: He really did pitch well, despite being tagged for 4 runs in 5 2/3 innings.

Most of the bullpen: Octavio Dotel, Joaquin Benoit and Jose Valverde slammed the door on the Red Sox.

Phil Coke: The Tigers main lefty out of the pen is in a major funk. His brain needs to have a brain to heart talk with the rest of Coke.

The umpires: I'm still ticked off over the events of last night. What a damn crock of...

Road trips: This latest trip was a most unpleasant one for the Tigers and fans. They ended up 3-6, but it felt worse. A long, successful home stand is badly needed.

Voting called on account of umpires picking the absolute worst time to stop a game that never should have started in the first place.