The Detroit Tigers took down the Texas Rangers 6-2 in the opener of their weekend series. Max Scherzer struck out 8 in taking the victory for the Tigers. Rangers starter Scott Feldman was knocked out of the game after 4 runs and 5 2/3 innings, taking the loss.

Prince Fielder hit a 3 run home run and Austin Jackson an inside-the-park homer for the Tigers. Josh Hamilton went deep for the Rangers

Hamilton put Scherzer and the Tigers in an early 1-0 hole, homering to dead center in the 1st inning. Hamilton took over the MLB lead in RBI at 96, moving ahead of Miguel Cabrera with his 31st home run of the year.

Scherzer danced on the edge of disaster in the early innings. The Rangers had runners on 2nd and 3rd with 1 out in the 2nd, but Scherzer got out the inning unscathed thanks to a strikeout of Mike Napoli and Mitch Moreland flying out.

The Rangers scored again in the 3rd, but I'm sure they would agree they shoulda been a contender had more. Ian Kinsler led off by doubling into the left field corner, Elvis Andrus singling him home. But Elvis left the building bases, thrown out trying to take 2nd on the Tigers' relay. The Rangers would then proceed to load the bases. Scherzer squirmed out of the jam when David Murphy just missed a grand slam by a few feet, flying out to the warning track in center. WHEW.

The Tigers' offense started to get untracked in the 4th. Cabrera singled home Jackson, who had led off with a triple, rejoining Hamilton at the top of MLB's RBI leader board.

The tide finally turned for good in the 6th, the Tigers sending 9 to the plate, scoring 4 runs on 4 hits and a walk...all with 2 out.

The rally started off harmlessly enough, Andy Dirks dribbling an infield single, Cabrera dropping a bloop into short right. Then came the fireworks, the big boom from the big man, if you will. Just after FSD posted Prince Fielder's average with RISP (he's 2nd in the AL at .385), he crushed a Feldman fastball, airmailing it into the right field seats, adding a bat flip for emphasis. The 3 run shot, Fielder's 20th of the season, put the Tigers up 4-2.

With Robbie Ross on in relief for Feldman, the Tigers tacked on another run after Fielder had cleared the bases. Brennan Boesch worked a walk, then rode home on Delmon Young's double.

Scherzer wasn't sharp in the early innings, resulting in a high pitch count. Pushing 100 pitches going into the 6th, it was going to be his last. He allowed a lead off single, but ended the night on a high note, striking out Murphy, Napoli and Moreland.

With 1 out in the 7th, Jackson hit a liner toward Nelson Cruz in right. Cruz had 2 choices, pull up and hope to hold Jackson to a single, or lay out and try to be a hero. Cruz took the 2nd option...and got burned. Jackson's liner dropped in front of a splayed out Cruz, the ball bouncing over his glove and rolling to the wall. Jackson, who had not yet reached 1st base when the ball fell, turned on his inner Usain Bolt. Gene Lamont was windmilling like a madman at 3rd, and sent Jackson. It wasn't even close, Jackson easily beating the relay, sliding home with a rare inside-the-park home run, giving the Tigers a 6-2 lead.

No worries of a Joaquin Benoit or Phil Coke implosion tonight, as Octavio Dotel took over for Scherzer and pitched 2 scoreless innings.

Jose Valverde took the mound in the 9th in a dreaded non-save situation. As is his wont, the Big Potato allowed a base hit, but got Moreland to bounce into a game ending 5-4-3 double play. No drama, please thank the Baseball Gods.

Cue Potato dancing at the end of a nice bounce back Tigers victory after yesterday's tough loss.

Prince Fielder sure knows how to flip a bat: 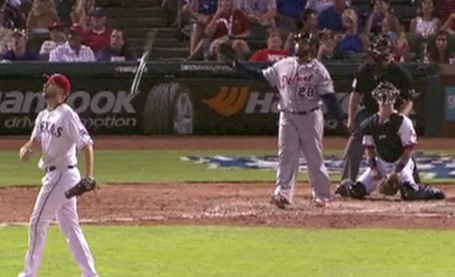 Nelson Cruz shows how not to play right field: 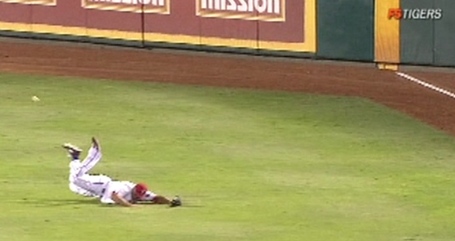 Austin Jackson: He put on a show at the plate while playing flawless center field.

Prince Fielder: Had just 1 hit, but it was the game-breaker. Want to win games? Hit 3 run home bombs. They crush the hearts and minds of pitchers.

Oakland A's: The White Sox come back from 3 runs down and walk off? Dammit.