The Texas Rangers won in walk fashion over the Detroit Tigers, 2-1. Mike Olt's RBI single in the bottom of the 9th was the game winner.

The Tigers' Justin Verlander and Rangers' Derek Holland went toe-to-toe in a pitchers duel, but neither were around for the finish. The 2nd of the Tigers' 3 pitchers, Brayan Villarreal, took the loss. The Rangers used 4 pitchers, Mike Adams earning the win tossing 2/3 of an inning in relief.

Austin Jackson gave the Tigers an early 1-0 lead, getting credit for a home run in a more traditional way than last night. Jackson lined Holland's 1-2 pitch over the wall in left, his 13th home run of the season.

The Rangers tied things up in the 3rd when 2 were out thanks to just 1 hard hit ball. Josh Hamilton reached out and grounded a single through the left side. Adrian Beltre followed with a line single to center. Verlander shattered Tiger Killer Nelson Cruz's bat, but he got enough wood on the ball to dribble it past Miguel Cabrera for an RBI single, tying the game at 1-1.

As we all remember, thanks to the media hysteria, Verlander threw 132 pitches in his last start. He continued with the heavy workload tonight, 79 pitches in 4 innings, allowing an uncharacteristic 7 hits. But the Tigers' ace got better as the evening wore on, getting his first 1-2-3 inning the 5th, again in the 6th and 7th.

All the while, the Tigers were flailing helplessly against Holland, unable to advance a runner (only 3) past 1st base after Jackson's homer. With 2 out in the 8th, having thrown 102 pitches (almost all low leverage) and having retired 10 straight, Ron Washington surprisingly pulled Holland. Then again, when you have Alexi Ogando available in the bullpen with a couple of days rest, I can't blame him. But I will admit I was relieved to see Holland leave the game.

Gerald Laird immediately greeted Ogando with a line drive single on a 99 MPH fastball. G-money is, after all, money. But Ogando ended the inning on a Jackson fielder's choice.

After 7 innings, 118 pitches and retiring 10 consecutive Rangers, Verlander received the "handshake of doom" from Jim Leyland. He was replaced with Brayan Villarreal, who got out of trouble before he could get into it thanks to Infante making a great turn on a 5-4-3 double play.

Washington continued throwing caution to wind with his relievers. The Rangers' skipper pulled Ogando after he walked Cabrera with 1 out in the 9th. Robbie Ross replaced him, walked Prince Fielder, and was immediately yanked for Adams. Instead of bringing a left handed bat off the bench, Leyland let Delmon Young face the righty reliever. He stunned us all, singling to right. Gene Lamont held Cabrera at 3rd, leaving the bases loaded.

Brennan Boesch pinch hit for Jeff Baker. He shattered his bat swinging at the first pitch. The resulting slow roller to 1st base led to Cabrera being forced at the plate for the 2nd out (the biggest of the game, actually). Jhonny Peralta ended the most frustrating inning of the night by flying out to center. The Tigers threatened, but do not score.

Of course, Villarreal started the bottom of the 9th by throwing 5 6 7 8 consecutive balls, walking Cruz and Michael Young. With Villarreal going sideways, Leyland went with the struggling Phil Coke out out of the pen. Craig Gentry came on to pinch hit, with one job to do....bunt. He couldn't drop a bunt down fair in 2 attempts. Coke then got a big out, Gentry swinging away, popping up to shallow center. The light-hitting Geovany Soto lived up to his rep, striking out. It looked like this game just might make it to extra innings.

But the Rangers sent recently called up uber-prospect Olt. to pinch hit. Olt fell behind 1-2, fouled off 4 consecutive pitches...then drilled a 2 hopper past a diving Cabrera for the game winning RBI single.

Rangers walk off with a win.

The difference in the game? The Tigers bullpen imploded, while the Rangers' relievers did their jobs.

But I can't put it all on the pen. The Tigers' offense can take their share of the blame as well. You aren't going to win many games with 5 hits, 4 of them singles. I think we all knew this game was going to end in a bad way after the Tigers left the bases loaded in the 9th. 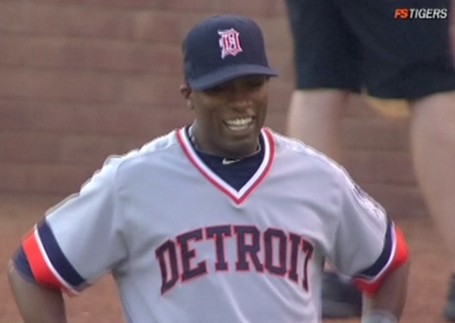 The Rangers are wearing blue atrocities, closer in appearance to softball uniforms I wore in the 1980's than anything else: 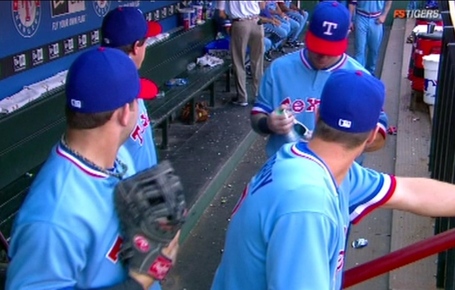 With all the damn blue, I honestly thought the color on my screen had gone out of whack.

Austin Jackson: His lead off home run was the Tigers' entire offense.

Brennan Boesch: You have to get the runner home, no matter what. For the want of a fly ball...

Brayan Villarreal: The wheels fell off in the 9th. As Leyland said, walks late in a tie game are the "Kiss of death."

Phil Coke: Leyland continues to run Coke out to the mound, Coke keeps on allowing runs.

When you have a triple and inside-the-park home run in the same game, you deserve recognition. Austin Jackson gets just that as BYB's PotG with 51% of the vote.