The Texas Rangers won the rubber game of their weekend series with the Detroit Tigers, 8-3. Yu Darvish pitched into the 7th inning to win his 12th game of the year. Rick Porcello took the loss for the Tigers, dropping his 7th game of the season.

Josh Hamilton hit his 32nd homer and had 3 RBI for the Rangers. Miguel Cabrera supplied the majority of the Tigers' offense with 2 hits and 2 RBI.

Porcello had a rough outing from the get go, the 1st inning setting the tone. Elvis Andrus singled with the no longer slumping Hamilton on deck. The best bat thrower in baseball put the Tigers in an early hole for the second time in this series, homering to deep center, Rangers going up 2-0.

While the Tigers could do little with Darvish (3 hits, no runs thru 4 innings), the Rangers were padding their lead, with lots of help from the Tigers' defense.

The 3rd inning was the Tigers' defensive Waterloo. With Ian Kinsler on 3rd after doubling home a run and advancing on the throw home, he was caught off of base on Andrus' ground ball to Porcello. A good throw had Andrus dead to rights. But Kid Rick rushed his throw to 3rd. Miguel Cabrera didn't have a chance, the ball bouncing to the tarp. Everyone was safe, Kinsler scoring and Andrus was standing on 2nd.

Hamilton followed with a line single to left, which Brennan Boesch proceeded to overrun, trying to make a play on Andrus that wasn't going to be there in the first place. The ball rolled to the wall, Andrus scoring easily and Hamilton ending up on 3rd base. Porcello managed to get out of the inning, but the damage was done. 3 runs, 3 hits and 2 very costly errors giving the Rangers a 5-0 lead.

The Tigers threatened, but did not score, in the 4th. Cabrera singled, Prince Fielder followed with a walk. But Boesch grounded into a fielder's choice,. Delmon Young hitting into the Tigers' 109th double play of the season to end the inning.

The Rangers upped their lead to 6-0 in their half of the 4th, Kinsler's sacrifice fly bringing home Geovany Soto.

The Tigers' bats woke up in the 5th, scoring 3 times. Leading off, Alex Avila walked. He would circle the bases on Jhonny Peralta's single and Omar Infante's double. After Asutin Jackson and Andy Dirks struck out, Cabrera gave the Tigers a crooked number, his double clearing the bases, making it a more respectable 6-3 game.

With 1st base open, the Rangers did the smart thing, intentionally walking Fielder in order to pitch to Boesch (The way Boesch has been swinging in this series, wouldn't you?). It paid off immediately, as the ever impatient Boesch swung at the first pitch and right into a fielder's choice to end the inning.

Porcello settled down after his very shaky start, pitching 6 innings, saving the bullpen somewhat. But he was in trouble all game long, with a single 1-2-3 inning to his credit.

Unfortunately, the Tigers offense went back to sleep for the remainder of the game.They brought the tying run to the plate in the 7th, after Darvish walked Dirks and Cabrera with 2 out. Robbie Ross relieved, Fielder popped up, inning over.

So was the game...for the Tigers, anyway.

If you thought the 3rd inning was brutal, the 7th damn near matched it.

Bryan Villarreal started the 7th inning, taking over for Porcello. The same issues Villarreal had last night cropped up this afternoon. After getting 1 out, the wheels came off once again, allowing a pair of runs on wild pitches. Andrus scoring (all the way from 2nd) on Villarreal's first wild pitch, Hamilton sliding home on the 2nd.

Darin Downs was brought in to take over for a panicked looking Villarreal after Nelson Cruz singled. Downs tossed a 3rd wild pitch before getting out of the inning relatively unscathed. After the dust (mostly from Villarreal's pitches bouncing a foot in front of Avila) settled, the Rangers led 8-3.

And that, as they say, was that.

In case you missed it: The International League suspended Drew Smyly for 3 games and Bruce Rondon for 5 in response to their actions in Saturday's win over the Durham Bulls. Smyly was ejected for hitting a batter after former Tiger Will Rhymes took him deep. Rondon was sent packing for causing a baseball fight (benches clear, pushing and shoving ensue) after throwing behind Rhymes. Who knew itty-bitty Will Rhymes would become Mud Hens public enemy number 1?

Screen caps of the day:

How to not play defense, as shown by Rick Porcello and Brennan Boesch.

Porcello has Kinsler dead to rights, but throws the ball away. Time to schedule PFP again. 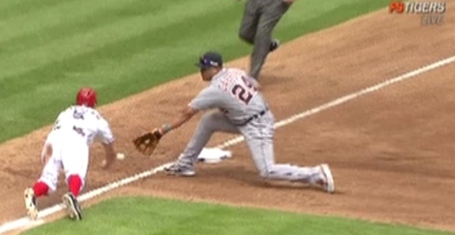 Brennan Boesch is not, or will he ever be, a good defensive player. 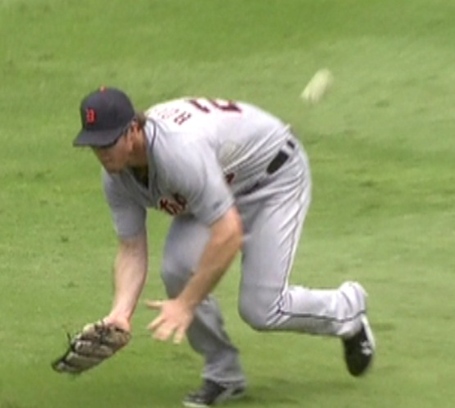 Miguel Cabrera: With 2 hits and 2 RBI, Miggy was all the Tigers' offense, save for...

Omar Infante: 2 more hits and an RBI for the Tigers' everyday 2nd baseman.

Darin Downs: The sole Tigers pitcher to not allow a run. The only base runner he allowed was via an intentional walk.

Rick Porcello: Give him credit for toughing out 6 innings, but not enough to avoid a hiss.

Brennan Boesch: 0-3 and huge error. Much more of this and the Quintin Berry bandwagon will fill back up.

Brayan Villareal: Had a series to forget. He just may not be mentally ready for back end relief.

Justin Verlander gets the PotG win with 86%, even if he didn't get a decision against the Rangers.