The Detroit Tigers mustered only 5 hits against the Baltimore Orioles, but 3 of them were home runs in a 5-3 victory. Joaquin Benoit picked up his 2nd win of the season in relief for the Tigers, Jose Valverde converting his 23rd save. Pitching in relief of starter Tommy Hunter, Darren O'Day took his1st loss of the season for the Orioles.

The Tigers' offense came from 2 players. Prince Fielder had a pair of home runs, 2 runs scored and 4 RBI, Miguel Cabrera had 2 hits, a home run and 3 runs scored. Matt Weiters homered and Nick Markakis had 2 hits for the Orioles.

The Orioles threatened, but did not score in the 1st. Nick Markakis led off the game with a looping opposite field double to the corner in left. The O's then called for the free out, aka sacrifice bunt, J.J. Hardy moving the runner to 3rd. With the infield in, Nate McClouth nubbed a ground ball to Fielder, throwing home instead of going for the easy out at 1st. It proved to be the right decision, as Alex Avila's sweep tag nailed Markakis. Rally nipped in the bud.

No need to ask "Si or no?" after Miguel Cabrera's first at bat. With 2 out in the 1st inning, Cabrera hit a "Si!" His 31st home run of the season was a no-doubt solo shot over the bullpen in left off Hunter would give the Tigers a 1-0 lead.

Inefficient Justin Verlander popped up in the 3rd inning, and IJV would ultimately cut his evening short. He entered the 3rd with a reasonable 26 pitches thrown. He ended the inning with a more unreasonable pitch count of 60.

Verlander got off on the wrong foot immediately, walking the lead off man, number 9 hitter Omar Quintanilla. Markakis followed with a double on an 0-2 pitch, Quintanilla scoring easily to tie the game at 1-1. For the 2d consecutive at bat, Hardy was asked to sacrifice bunt. He complied, giving a struggling Verlander a free out. Verlander would end up walking the bases loaded, but would get out of the inning by striking out Chris Davis.

With 1 out in the 4th, Avila hit a fly ball to deep right center, Orioles center fielder Adam Jones managed to overrun if. When the dust settled, Avila was standing on 3rd, Jones being charged with a 3 base error. But the aptly hash tagged on Twitter #FailTwins did just that, Delmon Young grounding out to short and Brennan Boesch striking out to strand Avila.

Matt Weiters broke the tie in the 5th, yanking Verlander's 96 MPH chest high fastball well into the right field seats. The 2 run shot giving the Orioles a 3-1 lead. Just like Cabrera's homer, it was a no-doubter. You could tell it was gone as soon as the ball was hit.

The Tigers tied the game in the 6th, as the meat of the order put on a show. Cabrera singled with 1 out. He would stroll home when Fielder sent a ball into freaking orbit, hitting the wall in crazy deep right center. 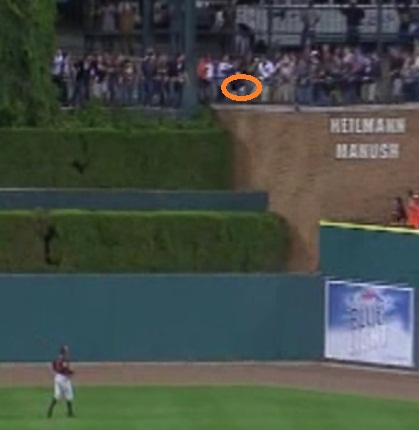 Fielder's 2 run bomb off Hunter, his 21st of the season, knotted the game at 3-3. At least that what I realized once I picked my jaw off the floor and placed my eyes back in their sockets.

The home run took Verlander off the hook. He was pulled after 6 innings and 116 pitches, ending his night with 6 strike outs and a no-decision.

The game was put in the hands of the relief corps of both teams going into the 7th. Octavio Dotel's night was a quick one, sending the Orioles down 1-2-3. Darren O'Day took ever for Hunter, he countered by setting down the Tigers 1-2-3.

O'Day got the first 2 outs of the 8th, then walked Cabrera. The O's decided they wanted the lefty-lefty matchup, bringing in reliever J.C. Romero (and his 8.38 ERA) to face Fielder. It didn't work. Fielder clobbered Romero's 2 strike breaking ball high, far and deep, the ball just staying fair as it landed well into the right field seats. The big man's 22nd home run of the season gave the Tigers a 5-3 lead. 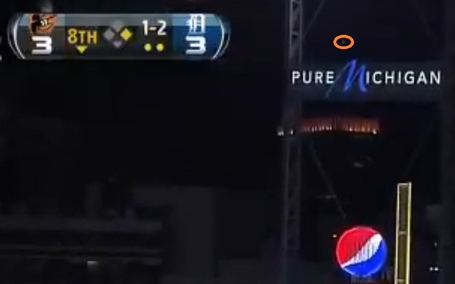 With a lead in hand going into the 9th, it would be Big Potato time.As is his M.O., Jose Valverde made things more interesting than hoped. He allowed a lead off double to Manny Machado and a Markakis fly ball which fell a couple of feet short of tying the game. But Papa Grande nailed down the save, Hardy striking out swiging to end the game, giving the Tigers the last at bat victory.

There was umpire raging a-plenty from the Orioles in the bottom of the 5th. Jhonny Peralta grounded out, Mark Reynolds making a nice play at 1st base to haul in the throw. But the Tigers argued his foot was off the bag. An umpire meeting commenced, and the call was shockingly overturned! Reynolds and Buck Showalter were understandably outraged, and summarily tossed.

Why were they outraged?

Peralta looks out to me, and 1st base umpire Jeff Kellogg was in a perfect position to make the call. Tim Welke, he is not. 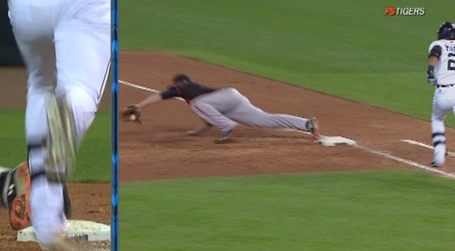 It's rare to see a call overturned. It's even rarer to see a bang-bang play at 1st base overturned. The screens show the Orioles had legitimate reason to be upset.

We covered this topic on the latest BYB Podcast, and the Tigers made it official today. Victor Martinez will continue rehabbing his knee, and will not play this season. Martinez will return in time for spring training 2013. We knew it was coming, but it's a sad day regardless for VMart, Little Victor and all Tigers fans.

Prince Fielder: Gets credit for the W thanks to his 2 home runs.

Miguel Cabrera: Homered and rode home on both of Fielder's big flies.

Justin Verlander: Didn't have his best stuff and battled through a 34 pitch 3rd inning. But he did enough to give the Tigers a chance to win.

Take away the numbers of Cabrera and Fielder, the remainder of the Tigers lineup went 1-23. Young doubled, Boesch walked, Avila got on base via an error. That was the extent of the offense from players not named Cabrera or Fielder.

Max Scherzer's 10 K's in the win over the Twins gave the Tigers' strike out artist a PotG victory with 80% of the BYB vote.