The Baltimore Orioles extended their lead in the AL wild card race, taking 2 of 3 over the Detroit Tigers with a come from behind 7-5 victory. Wei-Yin Chen struggled early, but lasted 5 innings, enough to get the win. Jim Johnson tossed a 1-2-3 9th for his 37th save. Dough Fister only lasted 3 2/3 innings, suffering his first loss since July 24.

Omar Infante (3rd for the Tigers, 11th overall) and Jhonny Peralta (9) went deep for the Tigers. Chris Davis hit his 20th home run of the season for the Orioles.

The Tigers started fast, died quickly, left a disappointing corpse. But it was fun for 20 minutes or so.

In the bottom of the 1st inning, the Tigers batted around, scoring 5 runs on 5 hits. Omar Infante opened the run-fest with a line drive solo home run into the Tigers' bullpen. After Chen pitched around Miguel Cabrera, Prince Fielder looped a single to left. Jhonny Peralta then came up with the big fly the Tigers so badly needed last night but never got, a 3 run blast to deep right center to empty the bases. The Tigers tacked on 1 more run against Chen when Delmon Young singled and Jeff Baker doubled.

With Fister on the mound, it would be game over, right? Normally, yes. But today's script had a twist. The Tigers gave Fister the run support he always seems to be lacking. Unfortunately, much like many a lottery winner, he could not handle the windfall.

The blowout was not to be.The Orioles followed up the Tigers' big inning with one of their own, sending 8 batters to the plate, scoring 4 times. Chris Davis homered for the 2nd consecutive game, going yard over the bullpens to lead off the inning. After a Mark Reynolds single, Fister settled down. But the Tigers' season long inability to turn a double play would, once again, bite them in a big way.

Omar Quintanilla grounded to short, and it looked as if an inning ending double play was on tap and the damage was looking to be minimal. But Infante's throw wasn't a good one, Quintanilla's hustling down the line turned the double play into a fielder's choice, keeping the inning alive. The roof then caved in on Fister.

Taylor Teagarden walked, Nick Markakis lined a double into the left field corner, scoring Quintanilla. J.J. Hardy sent Teagarden and Markakis home, drilling a 2 RBI double in the left center field gap. What had been a comfortable 5-0 lead had become a 5-4 nail-biter.

It was not what we've come to expect from Fister, who had been in 2011 form since coming off the DL.

After Chen labored through a 41 pitch 1st inning the Tigers' offense let him off the hook by going into deep hibernation. Chen would end up pitching 5 innings, allowing only 2 hits and no runs after throwing 1st inning batting practice. In the meantime, Fister was uncharacteristically throwing fewer fastballs, relying on his curve...and the Orioles were teeing off, especially with 2 out.

Fister pitched into the 4th, only to be pulled by Jim Leyland after the Orioles scored 3 times with 2 out. With runners on 1st and 2nd after (ARRRRGH) walks, Nate McLouth tripled, clearing the bases. Adam Jones followed with an RBI single, ending Fister's troublesome afternoon.

The game became a battle of the bullpens, starting with Luke Putkonen for the Tigers. You could hear the groans all over Tigerdom, but Putkonen was excellent. The recently called up reliever came through with 2 1/3 scoreless innings, keeping the Tigers in the game.

Brayan Villarreal had been getting hit hard, so he was shut down for a series with what the rookie called a tired elbow. The rest seems to have worked wonders. After throwing a scoreless inning on Saturday night, he followed it up by tossed an impressive 1-2-3 7th today.

Darin Downs the did same in the 8th, setting the Orioles down without incident. Joaquin Benoit ended the Tigers' relief pitching parade in style, posting his own 1-2-3 inning.

But just as the Tigers' bullpen nullified the Oioles' offense, the Orioles' pen did the same to the Tigers. Relievers Luis Ayala, Darren O'Day, Pedro Strop and Jim Johnson combined for 4 shutout innings, allowing only 2 hits.

Screen cap of the game:

Getting hit in the family jewels was the only way Delmon Young was going to get on base off Pedro Strop. Way to take one for the team! 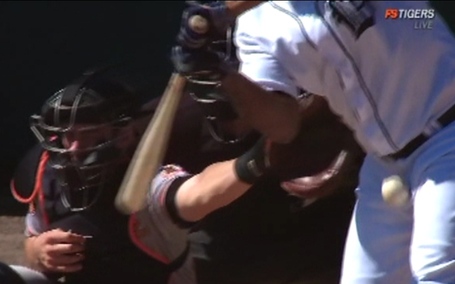 Omar Infante and Jhonny Peralta: Supplied the majority of the Tigers' offense with their 1st inning big flies.

Prince Fielder: What's the quickest play to end an rally? Hit into an inning ending double play. Fielder did it twice.

The offense from the 2nd inning on: The Tigers had 5 hits in the 1st inning, just 4 the rest of the game.

The lack of a big hit late in the game deprived Rick Porcello of a victory against the Orioles. But he did win BYB's PotG with 55% of the vote.