Share All sharing options for: Angels 2, Tigers 1: Failure to turn a double play costs Tigers and Rick Porcello a victory

In a pitcher's duel, Zack Greinke and the Los Angeles Angels beat Rick Porcello and the Detroit Tigers 2-1. Greinke got the victory by pitching 7 2/3 innings, Garrett Richards posting his 1st save of the season. Porcello was the hard luck loser, allowing 2 runs in 6 innings.

Miguel Cabrera supplied all the Tigers' offense with a solo home run. Howie Kendrick's 2 RBI double gave the Angels all the runs they would need.

What to say about tonight's game? 7 very familiar words. The Tigers threaten, but do not score.

I could also add Greinke was lights out, Porcello is owed a sincere apology from his defense and the Tigers' Achilles heel is their inability to turn double plays.

The pain started early, as the Tigers threatened but did not score in the 1stt. Brennan Boesch fouled out to end the inning with runners on 1st and 2nd. Then things got quiet. Real quiet. why? A pitcher's duel ensued.

When I do the BYB game recaps, I take notes. Far too many times I typed, "1-2-3 inning for Greinke." He just plain dominated, setting down 11 straight at one point.

Porcello wasn't as lights out as Greinke, but close, going toe to toe with the Angels' starter through 5 innings. Porcello got a few big outs with RISP. With 2 on, Izturis grounded into an inning ending double play in the 3rd, and Mike Trout grounded out with a runner on 2nd in to end the 5th.

But with the game scoreless in the 6th, bad things happened. Bad things, man.

Specifically, the Tigers faiure to turn a tailor made double play cost them runs...again. With Angels on 1st and 2nd and 1 out, Mark Trumbo hit a sharp ground ball to Jhonny Peralta. The Tigers got the out at 2nd, but Omar Infante's throw pulled Prince Fielder off the bag. Instead of an inning ending double play, the fielder's choice that shouldn't have been kept the Angels alive.

Kendrick would make the Tigers pay dearly for their sloppy defense.

Down 0-2, Kendrick ripped a Porcello slider into the left center field gap for a bases clearing double and a 2-0 lead. And every Tigers fan on the planet said, "I knew that would happen. I KNEW IT!"

In the 6th, once again, the Tigers threatened, but did not score. After Greinke had sent 11 Tigers back to the dugout, Cabrera doubled. Unfortunately Fielder and home plate umpire Jerry Meals disagreed on the size of the strike zone. FSD's Pitch Trax agreed with Fielder, but Meals saw differently, and called the big man out looking. 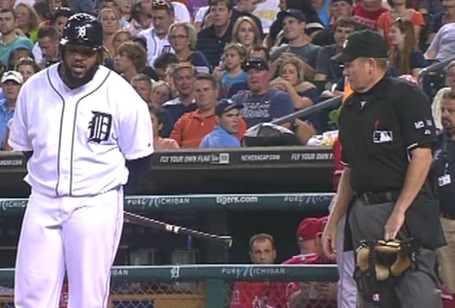 The normally laid-back Fielder was visibly upset, standing at home plate, making his displeasure known without looking at Meals.To his credit, Meals refused to be baited into an argument and ignored the big man.

Porcello was done after 6 innings and 101 pitches. Brayan Villareal came on and went Zorro on the Angels, allowing a single and stolen base, but getting all 3 outs via the K.

In the 7th...say it with me...the Tigers threatened but did not score. Boesch led off with a single, stealing 2nd as Peralta K'ed for the 2nd out. Alex Avila worked a walk, bringing up Andy Dirks, pinch hitting for Ramon Santiago. Dirks fell behind 0-2, battled back to 3-2...then struck out swinging.

With 2 out in the 8th, the Angels...you know what I'm going to write...threatened, but did not score. Kendrick advanced to the 3rd on a double and Villarreal's wild pitch. The Tigers' infield was drawn in, and Erick Aybar smoked a liner Jeff Baker caught in self-defense. The game remained 2-0 Angels.

Cabrera didn't bother with threatening to score in the 8th, he just went and did it, drilling his 32nd home run of the season. The big fly did double duty, drawing the Tigers within a run of the Angels at 2-1 and knocking Greinke out of the game.

Against a pair of Angels relievers, Boesch grounded out to 2nd (haven't seen that before, huh? ), Delmon Young struck out on 3 pitches (No ki\dding!), and Peralta did Young 1 better, striking out in 4 pitches (ARRRRGH!).

Commence with your bitching, as losses don't get much more frustrating than this.

The Boston Red Sox and Los Angeles Dodgers are trying to cross the t's and dot the i's on a blockbuster trade.

The Dodgers would get some very well known names and take on over $260MM in contracts -- 1B Adrian Gonzalez, RHP (and noted beer and chicken lover) Josh Beckett. OF (and injured FA bust) Carl Crawford, and (juice box stealing) Nick Punto -- while the Red Sox would receive prospects and a slap hitting 1st baseman.-- IF Ivan De Jesus, OF/1B Jerry Sands, RHP Rubby De La Rosa, RHP Allen Webster and 1B James Loney.

If the deal does go down, it's going to be huge fun watching the Red Sox fanbase deal with a rebuild and another season of Bobby Valentine. As for Punto? Good riddance! The NL can have him.

The Tigers lost at strike zone roulette. Cabrera was called out looking in the 1st: 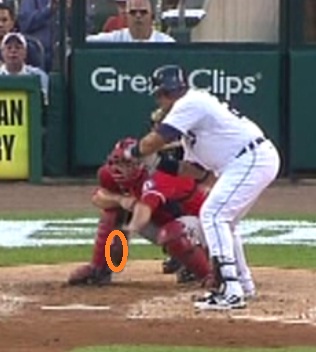 Fielder struck out looking in the 6th: 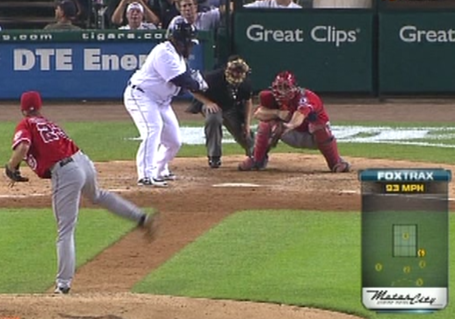 Rick Porcello: Deserved a much, much, much better fate.

Miguel Cabrera: Even with a gimpy ankle, he can't be stopped.

The bullpen: Villarreal and Dotel combined for 3 shutout innings.

Everyone not named Cabrera, Porcello,Villarreal or Dotel: You know what they say, lousy defense + no offense = no playoffs. I know it's only 1 game...but God dammit, time is running out.

You get a PotG, and you get a PotG and so do you! Thanks to 9 innings from Justin Verlander, a game saving catch by Austin Jacskson and a game winning hit from Alex Avila, they share the PotG award., But Verlander did get the most most votes of the 3.