Down 3-0, the Detroit Tigers came from behind to beat the Los Angeles Angels 5-3 on Jhonny Peralta's 8th inning, 2 out, 2 RBI double. Octavio Dotel won in relief of Drew Smyly, Jose Valverde nailed down his 26th save. Garrett Richards, the 3rd of 4 Angels pitchers, took the loss.

Prince Fielder and Delmon Young paced the Tigers' attack with 3 hits apiece. Peralta, Andy Dirks and Jeff Baker all chipped in with 2 hits each. Vernon Wells hit his 9th home run of the season for the Angels, Howie Kendrick added 2 hits.

Though the game ended in the Tigers' favor, it didn't start that way. The bottom of the 2nd inning and top of the 3rd inning tried the patience of all Tigers fans. It was not this team's one shinning moment.

Fielder led off, lining a double into the right field corner...but instead of sliding, he tried to...well, I'm not sure what he was trying to do, but he ended up overrunning the bag, and was tagged out despite an off line throw. Of course, Young would then double. Fielder's base running faux pas cost the Tigers a run.

Dirks followed, and struck out after getting ahead in the count 3-0. To finish the inning off with a flourish, Peralta went fishing on a pitch low and outside, meekly striking out.

As if on cue, Wells led off the 3rd by lining Smyly's hanging change-up over the bullpen in left, giving the Angels a 1-0 lead. Bobby Wilson would then hit a sure 4-3 ground out to Omar Infante, who proceeded to channel his inner Chuck Knoblach and short-arm a throw into the tarp, Wilson ending up on 2nd. Wilson would score on Howie Kendrick's 2 out, 2 strike single.

The Tigers' defensive shenanigans continued in the 4th, but from an most unexpected source. Austin Jackson. Kendrys Morales launched a fly to deep center field. Jackson broke back, looked to have gotten crossed up as he took a circuitous route, got to the spot in time, only to whiff on the catch. With Morales now on 2nd thanks to the 2 base error, Erick Aybar would cue a ball just inside 1st base for an RBI double and 3-0 Angels lead.

In the bottom of the inning, the Tigers...wait for it...threatened, but did not score. With 2 out, Felder and Young hit back-to-back singles. But Dirks would ground out to end the inning, and my frustration with the Tigers rose.

More Tigers' defensive weirdness took place in the 5th. Wonderboy Mike Trout would get on base thanks to a wild pitch on a strike out. Luckily, he was erased on a double play (Tigers turn a double play? I'm as shocked as the rest of you!). Smyly also had pitch past Jeff Baker's error at 3rd base in the inning as well.

In case you're counting, that would be 3 errors and wild pitch through 4 innings for the Tigers.

In the 5th, the Tigers...here we go again...threatened, but did not score. After Peralta led off with a single, he advanced to 3rd when Dan Haren threw Baker's double play ball into center field. Unfortunately, Jackson's uncharacteristically bad game continued, hitting a double play ball the Angels didn't throw away, ending the inning.

As disgusted one can get with the Tigers, you can't forget this team doesn't fold up their tents when behind, either. This team is never out of a game, and tonight was no different. 'What had been a 3-0 farce quickly became a 3-2 nail-biter.

Infante led off the 6th by turning a single into a double by hustling out of the box, beating Wells' throw. Infante's hustle paid off, as he was able to score on Young's RBI double. Dirks would then drive Young home with a bloop single, ending Haren's night.

The game then became a battle of the bullpens. The Tigers pulled Smyly after 6 and went with Octavio Dotel. The old man of the pen pitched 2 scoreless innings. The Angels countered with Jordan Walden and Richards. Richards would get into deep trouble.

Miguel Cabrera made a bid to tie the game off Richards in the 8th. As has been the Tigers' luck in this series, he hit the ball to wrong part of the field against the wrong defense, Torii Hunter with the nice running catch in front of the scoreboard in deep right center.. The Angels outfield of Wells, Trout and Hunter have gobbled up fly balls only Jackson would be able to run down for the Tigers.

So the Tigers decided to start hitting the ball where the Angels' outfielders ain't. If you can't hit it by them, hit it it around them.

After Cabrera nearly went yard, Fielder beat the shift by singling to left. With 2 out, Dirks smoked a line shot single Fielder had to dodge, and then rumbled to all the way to 3rd. The 2 out hit parade continued when Peralta lined a double into the left field corner, clearing the bases, Dirks not even drawing a throw home. Exit Richards, enter LaTroy Hawkins for the Angels.

The pitching change didn't help. Peralta would score on Alex Avila's single. Baker followed with another 2 out single. Hawkins finally got out of the inning on Jackson's ground out. But the damage had been done. The Tigers had come from 3-0 down to take a 5-3 lead, all 5 runs scoring with 2 out.

Time for the Big Potato. Jose Valverde came on to close out the Angels. There was NO DRAMA in a 1-2-3 9th. Game, as they say, over.

SCREEN CAP OF THE NIGHT:

When it comes to Jackson making an error, I would have to trot out the old internet bromide, "Pics, or it didn't happen." It happened...dammit. It was a rare rough game for Jackson with the bat and glove. 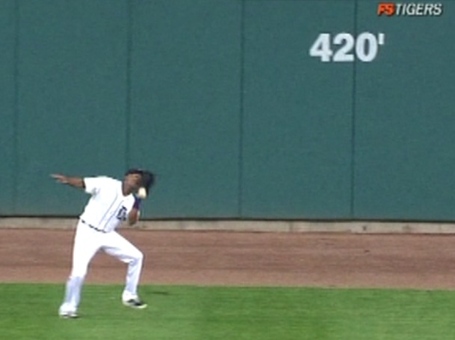 I don't expect to see this again from Jackson for a very, very, very long time.

Drew Smyly: Called up to make a spot start due to Doug Fister's injury, you couldn't ask for much better than 1 ER in 6 innings. What you saw from Smyly tonight is why the Tigers were willing to trade Jacob Turner.

The bullpen: Dotel, Potato, turn off the lights and start the Comerica's post-game fireworks

Rick Porcello deserved a win and an apology from his defense. All he'll get is BYB PotG with 77% of the vote.