The Detroit Tigers came from behind for the second game in a row to beat the Los Angeles Angels 5-2. The Tigers took the weekend series two games to one. Max Scherzer claimed a well deserved win, allowing just a run while striking out nine in seven innings of work.. Ervin Santana was tagged with the loss, allowing four runs in seven innings.

Prince Fielder (23) and Delmon Young (14) hit back-to-back home runs in the sixth to give the Tigers a lead they would never relinquish. Andy Dirks and Quintin Berry also chipped in with RBI. Kendrys Morales led the Anges' offense with 2 hits and their lone RBI.

Story of the game is a short one - Max Scherzer is good at baseball. When he's on, Scherzer has elite, top of the rotation stuff. After today's lights out performance, the Angels can vouch for it.

SCREEN CAP OF THE DAY:

The Angels' outfielders put on a show over the weekend (Jim Leyland admitted as much in the post game presser), the capper being Vernon Wells robbing Omar Infante of a home run in the 1st inning. Wells may be vastly overpaid, but can still play the outfield with the best of them. 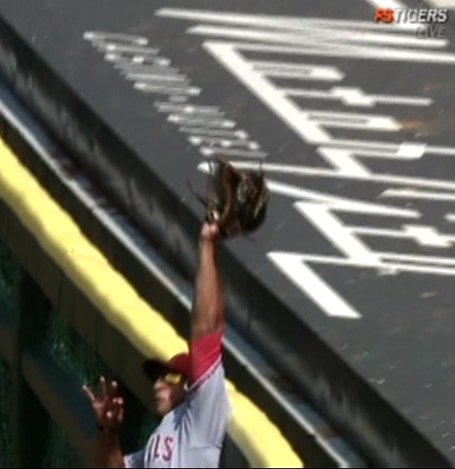 Max Scherzer: On the last BYB podcast, Kurt and I debated if Scherzer had become a true number 2 starter. He's well on his way with performances like today.

Delmon Young: 2 hits and a home run was the cherry on top of a great week.

Prince Fielder: With Cabrera out of the lineup, the big man came through in a big way with 2 hits, 2 RBI and a game winning home run.

Andy Dirks Tripled in the Tigers first run of the game, missing a home run by a neck. Batting 3rd in the order agreed with Dirks, though Leyland was quick to say that the 3 spot would remain Cabrera's. (silly, I know)

Gerald Laird: 0-3 on the afternoon. Offensively, G$ has turned into G¢ in the 2nd half.

Hitting a game-winning double in the bottom of 8th will usually win you a PotG. It did in Jhonny Peralta's case, narrowly beating Drew Smyly.