Anibal Sanchez made a fine first impression at home in front of a sellout crowd at Comerica Park, allowing 1 earned run in 6 innings as the Detroit Tigers dominated the Cleveland Indians10-2 .

Given plenty of run support thanks to a 16 hit attack, Sanchez (1-1) won his first game as a Tiger. Justin Masterson took the loss for the Indians, giving up 7 runs in 4 innings.

Prince Fielder led the Tigers' powerful offense with 3 hits, including his 18th home run of the season, along with 4 RBI and 2 runs. Miguel Cabrera also chimed in with 3 hits, 2 runs and an RBI. The annoyingly pesky Jason Kipnis had 2 hits and an RBI for the Tribe.

Sanchez began on shaky footing, allowing back to back singles to start the game. But Shin-Soo Choo grounded into a double play to stop the rally before it could start, though Omar Infante never made the tag on a passing Asdrubal Cabrera. Cowboy Joe West indicated Cabrera may have left the baseline...but knowing West, he could have just been playing Cowboys and Indians.

The Tigers scored first, much in thanks to left being the sun field in Detroit. Brennan Boesch led off the 2nd with a single (batting 5th seems to agree with him). With 1 out, Alex Avila sliced a sharply hit liner toward Ezequiel Carrera in left. He lost the ball in the sun, going into self-preservation mode as the ball flew past his head and rolled all the way to the wall. Avila was credited with an RBI double as Boesch was able to score all the way from 1st base to give the Tigers a 1-0 lead.

The display of outfield non-prowess continued in the 3rd. Fresh off the DL., Andy Dirks muffed Carrera's single, allowing him to advance to 2nd. He would score on Choo's 2 out single, tying the game at 1 all. .

The Tigers counted in the bottom of the 3rd, taking a lead they would never relinquish. Austin Jackson walked, Quintin Berry followed by blooping a single over the head of a drawn in Jack Hannahan at 3rd. Prince Fielder then buggy whipped a Masterson fastball, just missing a home run as his big fly hit off the top of the wall in right center for as long of a double as you'll ever see. The Tigers were now up 3-1, Jackson and Berry scoring easily.

The Indians were pounded into submission in the 4th, as 5 consecutive 2 out hits scored 4 Tigers runs. The big hit of the inning was, once again, off the bat of Fielder. This time his big fly cleared the wall in right center with plenty of room to spare, a 2 run moon shot putting the Tigers up 7-1. Masterson was able to get out of the inning without another run scoring, but his night was over.

As was the Tribe's, for all intents and purposes.

The Tigers extended their lead to 10-1 in the 6th. Cabrera led off with a single. Carrera, who makes Delmon Young look like a Gold Glover waiting to happen in left, allowed Fielder's pop fly to drop for a single. Singles from Dirks and Avila would bring home the mashers, making it 9-1. Later in the inning, Ramon Santiago would walk, ultimately making it a 10-1 blowout on Infante's sacrifice fly.

Given a huge cushion, Sanchez made the most of it. Once the Indians' scored, Sanchez held them scoreless while the Tigers were running wild on the base paths. After allowing a pair of singles to start the 7th, Jim Leyland was not about to let history repeat itself by leaving Sanchez in too long. He bounded out of the dugout to pull Sanchez, who received a standing ovation from the sellout crowd.

That was the pretty much all the excitement for the evening. The Tigers' offense took the rest of the night off, while Darin Downs and Brayan Villarreal pitched the final 3 innings without incident. Downs allowed an inherited runner to score in his 2 innings, Villarreal striking out 2 in a 1-2-3 9th.

No drama. Game over. Easy win.

All I can add is...More of this, pretty please?

In case you missed it: In order to make room for Andy Dirks, Don Kelly was designated for assignment.

In the post game, Leyland became visibly choked up while talking about Kelly and a text he received from the Wizard. The skipper wouldn't go into any more detail. Say what you will about Kelly as a ballplayer, but I think every Tigers fan is rooting for him to land with another big league team.

Screencaps of the night:

How not to use sunglasses while attempting to catch a baseball in blinding sunlight, as demonstrated by Ezequiel Carrera... 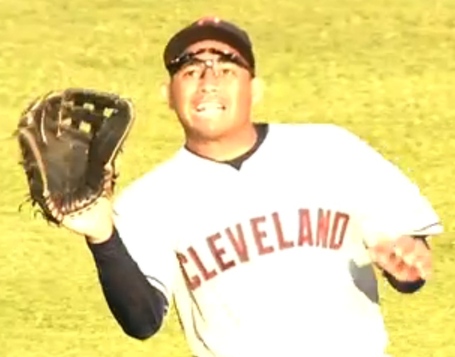 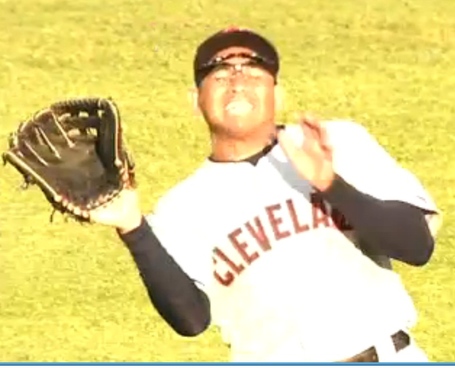 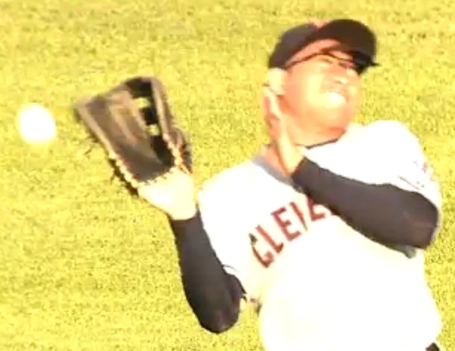 Prince Fielder: Hit a pair of baseballs nearly 900 feet combined, yet had only 1 home run to show for it. 4 RBI is a nice consolation prize.

Anibal Sanchez: This is the pitcher I expected to see. The home crowd was not disappointed and were quite vocal about it.

Not a one. But please feel free to make cracks about Ezequiel Carrera's defensive prowess.

Miguel Cabrera had 2 hits, including hit a massive home run over the Green Monster, which is currently still in orbit. Thus, Cabrera was your PotG with 52% of the vote.