In the opening game of their big 3 game series, the Detroit Tigers beat the Chicago White Sox 7-4, cutting Chicago's lead to 2 games in the AL Central. Octavio Dotel, the 3rd of 5 Tigers pitchers, was credited with the victory. Jose Valverde pitched the 9th for his 27th save. Starting pitcher Jake Peavy took the loss for the White Sox.

Delmon Young led the Tigers with 2 hits and 3 RBI, Miguel Cabrera adding 3 hits and 2 RBI while playing over a bad ankle. A.J. Pierzynski homered for the White Sox, Paul Konerko chipping in 2 RBI.

In the media scrum before tonight's game Jim Leyland was asked about Cabrera's ankle.

Cabrera definitely looked "Not totally healthy. He is not. He is not." in the top of the 1st, struggling to make plays in the field, and being charged with an error. A visibly limping 3rd baseman is a liability in the field.

But at the plate, it's a different story. Cabrera is, if not totally healthy, healthy enough to carry the offense.

After Andy Dirks walked in the bottom of the 1st, Cabrera looked just fine and dandy while launching a missile to the far reaches of left field. The 2 run shot, his 33rd of the season, put the Tigers up 2-0. They would go on to load the bases with 1 out, Alex Avila would end the rally by grounding into an easy 4-6-3 double play.

The White Sox countered when the douchiest catcher in baseball, Pierzynski, led off the 2nd by taking Fister deep to right for his 24th home run of the season.

With 2 out in the bottom of the 2nd, back to back extra base hits from Austin Jackson and Dirks pushed the Tigers' lead to 3-1.

The White Sox kept pace in the 3rd, Kevin Youkilis scoring on a fielder's choice. It could have been much worse, the Tigers botched 2 consecutive possible double play balls.On the first double play attempt, Omar Infante's throw was in the dirt, Prince Fielder unable to pick it. The 2nd miscue was a brain cramp on Infante's part, it appeared he thought there were 2 outs, not bothering to make the turn. Somehow Fister was able to pitch through the defensive shenanigans.

The 4th inning was another thing altogether.

Fister was BABiPed to start the inning. Dayan Viciedo nubbed an infield single, Alexei Ramirez followed with a seeing eye ground ball though the left side. Gordan Beckham then laid down a horrible bunt, popping it up. But a one-legged Cabrera was unable to make the play, Beckham safe on the error. Dewayne Wise was hit by a pitch, tying the game. Faced with a bases loaded situation, no outs and the meat of the White Sox order coming up, Fister would set down Youkilis, Adam Dunn and Paul Konerko to get out of the inning with the game tied 3-3. The White Sox have to be kicking themselves for wasting such a massive opportunity to break the game open.

The game tilted back in the Tigers' direction on the first pitch of the bottom of the 4th, Jhonny Peralta breaking the tie by drilling a no-doubt shot to deep left. His 11th home run of the season gave the Tigers a 4-3 lead.

In the 5th, both teams threatened, but did not score. The White Sox worked Fister for a pair of walks with 2 out, Beckham flying out to end the inning. The gimpy Cabrera doubled to lead off the bottom of the inning, (scarily) took 3rd on a fly ball, and would be left stranded when Avila ended the inning on a weak ground out.

Fister had command issues all game long, leading to an elevated pitch count. He was pulled after 5 innings and 101 pitches. Normally a starter, Drew Smyly made his major league debut as a relief pitcher, taking the mound in the 6th in place of Fister. The rookie didn't last long in relief, walking 2, allowing a stolen base, throwing a wild pitch, all while only getting 1 out.

Octavio Dotel was called upon to clean up Smyly's mess. He would keep damage to a minimum, Konerko tying the game at 4-4 with a foul sacrifice fly, bringing home Wise.

The White Sox threatened, but did not score in the 7th. Pierzynski led off with a hard hit double, and advanced to 3rd on Viciedo's 415 foot sacrifice fly to dead center. If you were like me, you were expecting the worst. But Old Man Dotel was able to get out of the jam, first by forcing Ramirez to pop out, then winning a 10 pitch battle with Beckham, who would fly out to end the inning.

Peavy's night would come to end in the 7th as the Tigers finally put up a crooked number. Dirks led off with a walk, Cabrera sending Peavy to the showers with a line shot single to left. Matt Thornton entered the game, only to greet Fielder with a fastball to the shoulder. The HBP loaded the bases with no one out.

If I asked who would you want at the plate with the bases loaded against the team the you have to beat to win the division, how many of you would have said, "Delmon Young!"

But Young crossed up all of us who were expecting a strikeout or double play, coming through in a huge way with a bases clearing double. What could be considered the most important hit of the season gave the Tigers a 7-4 lead.

The outcome would now fully rest on the shoulders of the Tigers' bullpen.

Joaquin Benoit was as good as I've ever seen him in the 8th, mowing down the White Sox, striking out the side. Jose Valverde, aka The Big Potato, aka Papa Grande, aka Heart Attack Waiting To Happen came on to close out the White Sox, There was a modicum of drama, Pierzynski drawing a base on balls with 2 out, taking 2nd on defensive indifference. But Valverde struck out Viciedo looking. 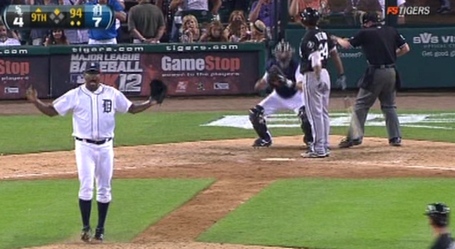 The #Tigers have traded Jeff Baker to Atlanta for a player to be named later, on or before 9/30/12.

More on today's roster moves involving Baker, Avisail Garcia and Al Alburquerque can be found by clicking this link!

SCREEN CAP OF THE NIGHT:

After Dunn dropped Infate's foul pop up, the look on his face said it all... 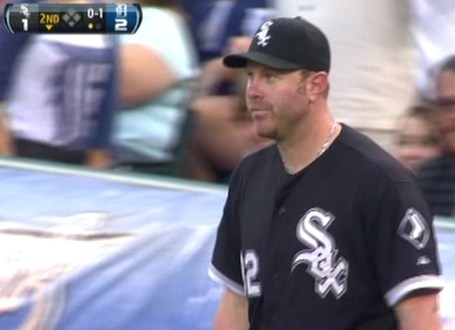 Delmon Young:2 hits, 3 RBI, and a game winning double? Delmon deserves a roar, no question about it.

Miguel Cabrera: His ankle makes him a liability on defense. But a gimpy Miggy still terrifies pitchers, as 3 hits and 2 RBI attest.

Andy Drks: Necked out 2 hits and a pair of walks, scoring twice. Tacked on an RBI for good measure. At this point, there's no reason to take Dirks out of the lineup, period. None. Zip. Nada.

The back end of the pen: Dotel walked into a mess, ended up pitching a solid 1 2/3 innings. I have to give Benoit kudos for striking out the side in the 8th, including Youkilis and Dunn. And Potato was his normal self, allowing a base runner, but getting the save, regardless.

Alex Avila: 0-4, 6 LOB, grounded into a double play in the 1st to end a rally, ended the 5th by grounding out with Cabrera on 3rd. Changed things up by ending the 8th on a fly out. Not one of Avila's better offensive evenings.

Drew Smyly: Did not make a good impression pitching in relief.

Jim Leyland: The manager gets a hiss for playing a hobbled Cabrera in the field. Common sense says to DH the big man until he has a semblance of mobility at 3rd base.

By recapper acclimation it was Rick Porcello, who coulda, woulda, shoulda have been credited with a win. But you need run support to get a W, something the Tigers forgot.