Share All sharing options for: Tigers 6, Indians 1: Doug Fister Dominates, Tigers Offense Takes It From There

Doug Fister retired the first 17 batters he faced and didn't allow a run until the 9th inning en route to his first complete game of the year. Meanwhile, the offense finally solved Ubaldo Jimenez and the Tigers cruised to their 3rd straight victory, 6-1.

The Tigers backed Fister with some early run support, scoring two runs in the bottom of the 2nd. With Prince Fielder on first base, Brennan Boesch lined a 2-strike pitch from Jimenez into right-center field for a triple. Fielder rumbled home from first to give the Tigers a 1-0 lead. Delmon Young then hit a sacrifice fly to deep right field to score Boesch, putting the game out of reach at 2-0.

Then came the rains. The umpires stopped the game almost immediately, suspending play with an 0-1 count to Alex Avila. After a 36-minute delay, play resumed and Jimenez got Avila and Jhonny Peralta to fly out to end the inning.

After a couple more 1-2-3 innings from Fister, the Tigers added to their lead in the 4th. With Fielder and Avila on 3rd and 1st, respectively, Peralta hit a 2-out triple to the exact same spot as Boesch's triple two innings prior to double the Tigers' lead. Omar Infante then legged out an infield single to push the lead to 5-0.

Ezequiel Carrera, he of the sunglasses fiasco from last night's game, hit a sharp line drive over the head of Austin Jackson in center field to break up Fister's perfect game with 2 outs in the 6th inning. Jackson froze momentarily after the ball was hit, and that slight hesitation was the difference as the ball traveled just inches over his glove. The crowd gave Fister a nice ovation, and he got Jason Kipnis to fly out to right on the next pitch to end the inning.

The Tigers chased Jimenez in the bottom of the 6th after putting two runners on with just one out. Infante hit a sacrifice fly off of reliever Esmil Rogers to extend the lead to 6-0.

With the game well in hand, Fister was on cruise control. He gave up another single to Michael Brantley in the 8th before allowing a run in the 9th on another Carrera triple and a Kipnis RBI groundout. Shin-Soo Choo hit a 2-out double before Fister struck out Carlos Santana to end the game.

Image of the night: 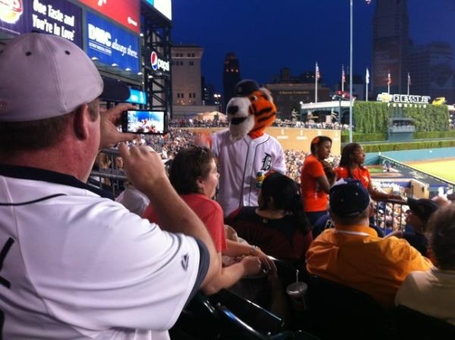 Miguel Cabrera: Didn't have a hit tonight, and I want to be "that guy" in my first (and probably only) game recap this year.

Austin Jackson: Had a slow jump on Carrera's triple that broke up Fister's perfect game in the 6th. Yes, that is my only gripe.

Prince Fielder, with 78% of the vote.