Tigers 10, Indians 8: The expected walkoff didn't happen...then it did, courtesy of Miguel Cabrera

Share All sharing options for: Tigers 10, Indians 8: The expected walkoff didn't happen...then it did, courtesy of Miguel Cabrera

The Detroit Tigers erupted for 5 10th inning runs with 2 out off Cleveland Indians closer Chris Perez to take down the Tribe in walk off fashion, 10-8. Miguel Cabrera's 27th home run of the season was the game winner.

The 6th and final pitcher of the game for the Tigers, Darin Downs, received credit for the victory. Perez both blew the save and was tagged with his 3rd loss of the season.

The top of the Tigers order triggered the offense. Austin Jackson lead the team from the lead off spot with 4 hits, 3 runs and an RBI. Omar Infante added 4 hits, a home run and 3 RBI. Cabrera homered, had 2 hits and 3 RBI. Ezequiel Carrera and Travis Hafner had home runs for the Indians.

Tigers starter Max Scherzer quickly found himself in 1st inning trouble against the Tribe, Asdrubal Cabrera doubling with 1 out, Carlos Santana working a walk with 2 out. Scherzer did make some good pitches, but was BABiPed. A pair of 2 out flairs off the bats of Michael Brantey and Hafner found find outfield green for 2 runs and the early lead.

The Tigers got 1 run back in their half of the 1st. Jackson led off with a walk off Indians starting pitcher Chris Seddon, Infante following with a single. Cabrera's ground out moved the runners over, Prince Fielder's RBI single plating Jackson, making it 2-1 Tribe. But the rally was cut short as Demon Young, making his first start of the series, grounded into a 4-6-3 double play.

From this point, the 2 teams would nickel and dime each other with 1 run innings until the 10th. But before there was more scoring, a brewhaha featuring a showboat umpire who apparently believes fans pay to see his act took center stage.

In the bottom of the 2nd, despised country music singer/lousy umpire Cowboy Joe West decided to make his presence known after a low-key first 2 games. Gerald Laird dove into 1st base trying to beat a throw, but was called out by West (replays showed he was safe). G-Money made his displeasure known, and was immediately tossed by West.

With West in idiot mode, Jim Leyland came roaring out of the dugout, said the magic words and was sent packing. With his game over, Leyland piled on the histrionics, getting his money's worth with the consensus (along with Angel Hernandez) worst umpire in baseball. 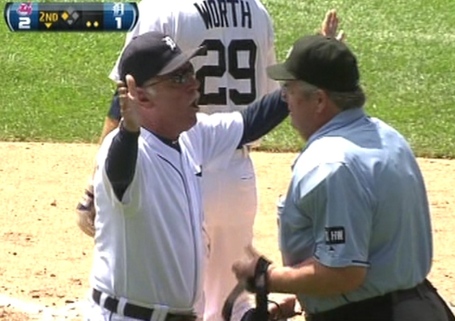 Shin-Soo Choo took Scherzer deep to left in the 3rd, the solo home run pushing the Indians' lead to 3-1.

Jackson led off the 3rd by tripling to center, coming home on Cabrera's ground out, the Tigers pulling to with a run at 3-2.

The Tigers manufactured a run in the 4th. Jhonny Peralta led off with a walk, taking 2nd on Brennan Boesch's ground out. Alex Avila then knotted the game at 3-3 with an RBI single

The Tribe took a 4-3 lead in top of the 5th, running wild on Scherzer. Cabrera singled, easily stole 2nd and 3rd, scoring on Santana's single.

Scherzer's day was done after 5 innings,105 pitches and 9 strikeouts, scattering 10 hits and 4 earned runs in what would be a no-decision.

At this point, I'm guessing Infante said, "The heck with manufacturing runs, I'll do it with 1 swing." Which he did leading off the bottom of the 5th, yanking Seddon's fastball well over the bullpen in left, tying the game at 4-4.

Brayan Villarreal and Phil Coke combined for a scoreless 6th. Coke returned for the 7th, but the wheels came off, Coke unable to dispatch a pair of left-handed bats after Santana singled with 2 out. Brantley walked, getting on base for the 4th consecutive time. Hafner then looped a single to the opposite field to give the Indians a 5-4 lead.

The Tigers got the run right back in the bottom of the inning. Infante, having his best game with the team since the trade, led off with a hustle double. Cabrera singled to left, Gene Lamont wisely holding Infante at 3rd. Vinnie Pestano took over for Joe Smith on the mound, and allowed his first inherited runner to score this season. Fielder clubbing a sacrifice fly off Pestano to bring home Infante and, once again, tie the game.

After Octavio Dotel and Joaquin Benoit sent down 6 consecutive Indians in the 8th and 9th, the Tigers had the top of the order coming to the plate in the bottom of the 9th. With Josh Tomlin on the mound in relief, Jackson smoked a liner into the right center field gap, splitting the outfielders for a stand up triple.

Infante had a chance to end the game with the Indians drawing in both the infield and outfield, but struck out.

Infante's K was the worst case scenario, as the Tribe could then intentionally walk Cabrera and Fielder in order to face Quintin Berry, who had taken over left from Young in the 8th. The Tribe went with a 5 man infield as Berry fell behind in the count 1-2. He proceeded to hit a one hopper to Santana at 1st, which he converted into an easy 3-2-3 double play.

Thanks to the emotionally deflating 9th, Tigers fans were expecting the worst. We got it, as Benoit imploded. Hafner deposited a Benoit fastball into the Tribe bullpen for a 6-5 Indians lead. Carrera followed with a solo shot to right for a 7-5 lead and end Benoit's afternoon.

Those insurance runs made a huge difference, extending the game as the Tigers refused to go quietly against loud mouth Tribe closer Perez. After 2 were out, Perez completely lost command, the game spinning wildly out of control. Avila worked a walk. keeping hope alive. Andy Dirks pinch hit for Danny Worth, and walked on a 3-2 pitch. Hope remained alive.

Jackson made his great game even better with his 4th hit, lining a double down the left field line, Avila scoring. Infante made up for his 9th inning failure, fluttering a single just over the glove of an outstretched Cabrera with 2 strikes, Dirks and Jackson scoring to tie the game at 8-8.

With the game on the line and an MVP candidate at the plate, the Tigers weren't going to fail when given a second shot at a walk off victory. Cabrera did just that, drilling a 2 run walk off shot into the bullpen.

Perez and the home plate ump knew Cabrera had won the game as soon as the ball left his bat. 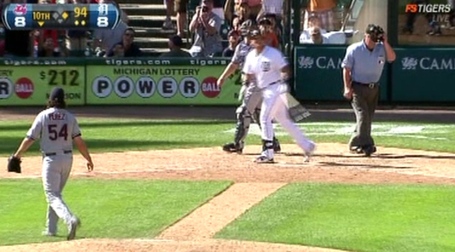 GAME OVER. The AL Central is officially a 2 team race.

The Tigers were twice a single strike away from this being one of the more miserable losses of the season. Instead, it became the most memorable win thanks to a completely unexpected 5 runs with 2 outs in the bottom of the 10th.

Baseball sure is a funny game, huh?

Sunday was not a day of rest for the Tigers' front office.

As expected, the Tigers optioned Danny Worth back to Toledo in order to make room for Baker.

Screencap of the game: 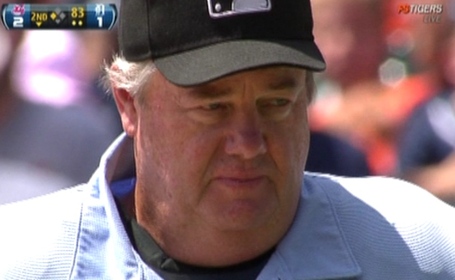 Omar Infante: A legitimate 2nd baseman who is not an automatic out is a nice thing to have on your team.

Austin Jackson: A marvelous game from the Tigers' lead off man with 4 hits and 3 runs

Miguel Cabrera: It was never in question Cabrera was going to end the game in a big, victorious way.

Joe West: Hey West! The Jerk Store called, and they're running out of you!

Quintin Berry: The Tigers' fastest runner hit into a double play with 1 out and the bases loaded . That's a hiss.

Joaquin Benoit: What happened? I though the home run binge was over.