The Detroit Tigers home winning streak ended at 10 games, falling to the New York Yankees 12-8.The 2 teams combined for 31 hits, 18 by the Evil Empire.

C.C. Sabathia (12-3) pitched into the 7th inning for the Yankees, gaining the victory. Anibal Sanchez's 3rd start as a Tiger was not the charm, allowing 7 runs in 3 innings, falling to 1-2

The Tigers' offense was led by Jeff Baker and Brennan Boesch, each with 2 hits and 2 RBI. Omar Infante added his 2nd AL home run of the season. Yankees CF Curtis Granderson had 3 hits and 4 RBI for the Yankees, including a 3 run homer.

Sanchez's mistakes bit him in the ass in the 1st, and it only got worse from there...

Nick Swisher walked with 1 out, Mark Teixeira was hit by a pitch with 2 out. Newest Tiger Killer Eric Chavez increased his BABiP dropping a dying quail in front of Austin Jackson or an RBI single. Tigers ex-pat Granderson, who had been having an awful series (0-10, 5 K), singled to right, giving the Evil Empire a 2-0 lead.

The Tigers threatened in their half of the inning, Miguel Cabrera walking and Prince Fielder being hit by a pitch for 2nd time in 3 games. But Delmon Young did what he does so well, frustrate fans to no end, by flying out to end the inning.

The game spun out and crashed...hard...for Sanchez in the 3rd. He hit Robinson Cano in the keister with 1 out, prompting home plate umpire Tim Welke to rush out from behind the plate and issue warnings (of course, he didn't bother when Fielder was plunked after Sanchez hit Teixeira). Cano stole 2nd, Chavez walked, setting the table for Granderson. He cleared both the bases and the right field wall, hitting his 30th home run of the season, giving the Yankees a 5-0 lead.

As the Tigers were doing nothing with the super-sized Sabathia, the Yankees were knocking Sanchez out of the game. Casey McGehee led off the 4th with a double. Derek Jeter and Swisher singled, scoring McGehee and sending Sanchez to the showers.

Jim Leyland remembered he hadn't used Duane Below in nearly 2 weeks, and figured no time like the present to get the cobwebs off. Below allowed a pair of fly balls, the 2nd a Teixeira sacrifice fly making it a 7-0 game.

Jeff Baker had his first hit as a Tiger in his 2nd at bat, lining a double into the right field corner with 2 out in the 4th. He scored his first run as a Tiger when Brennan Boesch singled. Of course,all this came after Young grounded into a double play.

Baker continued to make friends in the 6th. Fielder legged out a single (Yes, the big man had an infield single), Young following with a double. Baker brought them both home, looping a Sabathia breaking ball into left for a 2 RBI single, bringing the Tigers to within 4 runs at 7-3. Cano's error on Boesch's ground ball inspired hope of a big inning, putting Baker in scoring position, but the rally petered out as Gerald Laird flew out and Ramon Santiago went down swinging.

In the 7th, Granderson's bat punished the Tigers again. He led off with a double, ultimately scoring on Ichiro's swinging bunt to make it an 8-4 game.

The Tigers countered, as Granderson's replacement triggered a rally. Jackson singled, went to 3rd when McGehee misplayed Cabrera's double play ball, scoring on Fielder's RBI ground out. That ended the fat man's night, to be replaced by (not the basketball player or former Tiger) David Robertson.

Robertson proceeded to get BABiPed, putting the Tigers back in the game.

Teixeira must have learned how to play 1st by watching Fielder, as he went too far to his right on Young's dribbler, unable to make a play. With runners on 1st and 3rd, Andy Dirks pinch hit for Baker. Of course the hero of the Caribbean Series delivered, doubling down the left field line, scoring Cabrera. Boesch followed with a swinging bunt infield hit, Young scoring. Alex Avila sliced a liner off his fists into short left, Dirks racing home.

The Tigers batted around, scoring 4 runs on 5 hits.What was a 7-0 Yankees blowout was now an 8-7 nail-biter.

Phil Coke took over in the 8th, and he pitched as he has for the past month. Badly. After the Tigers put 4 runs on the board, Coke gave 2 right back. Singles by Swisher, Cano and Teixeira and a Chavez ground out (after an 11 pitch battle) bumped the Yankees lead to 10-7...not quite as nail-biting.

But the never say die Tigers...didn't. Infante got a run back with 1 out in the 8th, drilling a solo shot into the bullpen, his 2nd home run in 4 games.

Brayan Villarreal took the mound in the 9th, and got 2 quick outs. But as it happens with Villarreal, if things go bad, they go bad quickly. Jayson Nix singled, as did Jeter. Villarreal helped things along by balking Nix home, putting the Yankees back up 11-8. Cano's single made the final score 12-8.

Yankees closer Rafael Soriano didn't allow the Tigers to even smell a hit, setting them down 1-2-3 to end what was a wild, crazy, exciting...loss.

You would think fans would have learned after Sunday's furious comeback. Under Jim Leyland, the Tigers never say die. Once again, those fans who gave up on the Tigers (there were plenty, going by bitching on the social networks) when they went down 7-0 missed out on several excellent performances. Too bad not enough of them were from pitchers.

Jim Leyland put the game succinctly: "We just didn't pitch." He said in 4 words which takes me 1600.

2nd baseman Omar Infante made his best defensive play...at 1st base, bare handing Prince Fielder's throw. Unfortunately, it didn't mean a thing, as Ichiro was safe. But it was one Hell of a play by Infante. 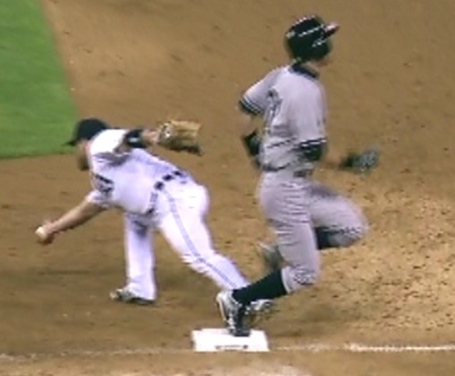 All sensitive Nick Swisher wants is a hug from Fielder, who complied while tagging him out. 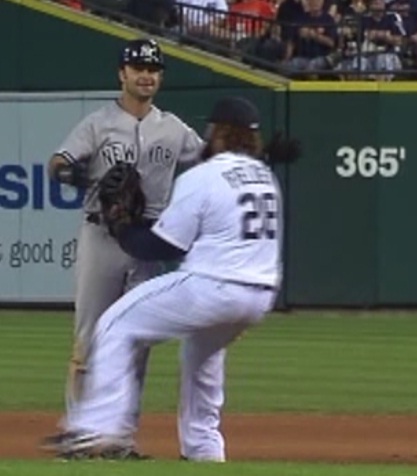 I could give them to most everyone with a bat, but here goes...

Jeff Baker: Showed what the Tigers have been missing off the bench from their right hand bats with 2 hits, 2 RBI, and a run scored.

Brennan Boesch: The only other Tiger to equal Baker, with 2 hits and 2 RBI.

Duane Below: Kept the Yankees within spitting distance with 3 innings of 1 run relief.

Andy Dirks: His necking out a pinch hit double has him hitting a lofty .347.

Anibal Sanchez: He was picked up in hope of giving filling a gaping hole in the Tigers' rotation. The jury is still out, with 2 bad starts (12 ER in 9 IP) to a single good appearance (2 ER in 6 IP).

Phil Coke: He committed the Cardinal Sin of pitching. Allowing runs after a big offensive inning. Coke has been awful for more than a month. At this rate he'll soon be down with Daniel Schlereth in Tigers fan's hated lefty relief pitcher.rankings.

MLB.TV: Went in the tank for the first half of the game, just like Sanchez.

Rick Porcello was good, so was Andy Dirks. But Miguel Cabrera was great. His amazing 2nd half continued with a home run, double and 3 RBI, which gives him another BYB PotG win.