Behind 8 shutout innings from Max Scherzer, the Detroit Tigers beat the Chicago White Sox 5-1, taking the first 2 games of their AL Central showdown.

Scherzer was electric, striking out 9 while allowing only 4 hits, wining his team leading 15th game. The White Sox emptied their bullpen, using 8 pitchers. But it was starter Francisco Liriano who would be credited with the loss, pitching 4 innings, allowing 3 runs, 4 hits and 7 walks.

The Tigers' offense was led for the 2nd straight night by Delmon Young, who tripled and homered. Miguel Cabrera added 3 hits and 2 RBI, Austin Jackson chipped in 2 hits and 2 runs. Orlando Hudson accounted for the only White Sox run with a 9th inning RBI single.

The game started with the same old, same old. Scherzer struck out 2 of 3 White Sox in an uneventful top of the 1st, and the Tigers threatened, but did not score, in the bottom of the inning.

Brennan Boesch drew a 1 out walk off Liriano, Prince Fielder worked a 2 out base on balls. But Young popped out to short right, ending the threat. It was only delaying the inevitable, as Liriano would be handing out walks like Halloween candy.

The Tigers got on the board first, and with a crooked number at that, with help from a wild Liriano. Austin Jackson led off with a walk, the 4th allowed by Liriano. Boesch finally made Liriano pay for the free passes, drilling a stand up triple into power alley in right, Jackson scoring easily. Cabrera, gimpy ankle and all, singled Boesch home. Fielder walked, the 4th consecutive Tiger to reach base. Young moved the runners over with a swinging bunt, the 1st out of the inning.

With Liriano on the ropes, the White Sox elected to intentionally walk the right hand hitting Jhonny Peralta, loading the bases, preferring to pitch to the lefty swinging Avila. Seems manager Robin Ventura knew what he was doing. Liriano made Avila look silly, striking him out on 3 pitches out of the zone. Garcia did the same, ending the threat with the Tigers leading 2-0. A disappointing 2-0 lead, considering...

The Tigers had a chance to add to their lead in the 4th, as Liriano kept putting Tigers on the bases. Jackson singled with 1 out, Cabrera walked, the 7th (!) given up by Liriano. But Fielder grounded out to end the inning. Once again, Liriano skirted disaster, the Tigers having 13 LOB through 4 innings.

The White Sox put a runner in scoring position with 1 out in the top of the 5th, Dayan Viciedo doubling off the base of the wall in right, only the 2nd hit of the night. Scherzer just shrugged it off. Viciedo was still standing on 2nd at the end of the inning, after an Alexei Ramirez fly out and Gordon Beckham K.

Liriano lasted 100 pitches, exactly. Young knocked Liriano out of the game in the 5th, missing a home run by inches, settling for a lead off triple. 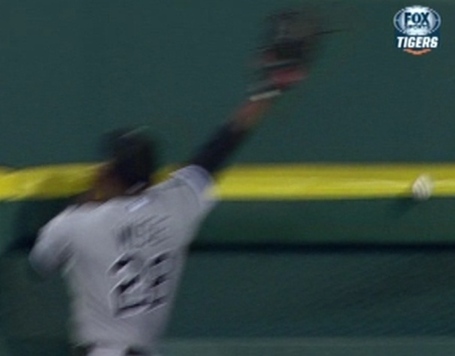 Leyland asked for video review This is what the umps saw. No home run for Young.

With a runner on 3rd and no outs, Ventura went into LaRussa pitcher juggling overdrive. His first call to the bullpen brought on Brian Omogrosso to face Peralta. With the infield in, Peralta grounded out. Job done for Omogrosso. Ventura wnet back to his pen, calling on Leyson Septimo (Gesundheit!). The move worked, Avila weakly grounded out to the drawn in infield.

But Ventura's over-managing led to one pitching change too many. He pulled Septimo, asking Nate Jones to face the rookie, Garcia. There would be no squandering with Garcia at the plate. He drilled a line single to right, his first major league hit and RBI would give the Tigers a 3-0 lead.

The White Sox had another min-threat in the 6th, the pesky Wise reaching 2nd on a single and stolen base. No problem for Scherzer, setting down the next 3 ChiSox, which happened to be the meat of the order - Kevin Youkilis, A.J. Pierzynski and Konerko.

Young just missed going yard in the 5th. He didn't miss in the 7th, putting the Tigers up 4-0. The smoking hot Young faced Jesse Crain, the 6th White Sox pitcher of the evening. Crain's first pitch was a fastball which Young quickly deposited into the bullpen for his 16th home run of the season.

Ventura kept going to the pen, the Tigers kept tacking on runs.

In the bottom of the 8th. Jackson tripled off the 7trh White Sox arm of the night, Addison Reed. Cabrera would end Reed's night by poking an RBI single to right, putting the Tigers up 5-0. Turns out 8 pitchers was the charm, as Deunte Heath ended the night White Sox relief pitchers took over Comerica on a Fielder double play.

Scherzer's night was over after 8 shutout innings. Jose Valverde entered the game in the 9th...a non-save situation. It was a normal Big Potato performance. He allowed a pair of extra base hits, and a meaningless 2 out run. But Papa Grande settled down, getting Viciedo to pop up for the final out.

The Tigers are now just 1 game out of 1st place.

You can find out more about the return of Don Kelly, Ryan Raburn and the rest by clicking on this link!

When is a punch out not a punch out? When it's strike 2. Home plate ump Fieldin Culbreth forgot the count, giving Fielder the strike 3 call on strike 2. Whoops. 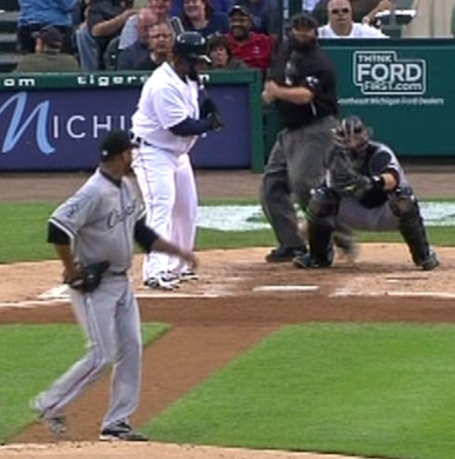 Who was the happiest person at Comerica Park when went Young went yard in the 7th? Avisail Garcia, that's who! 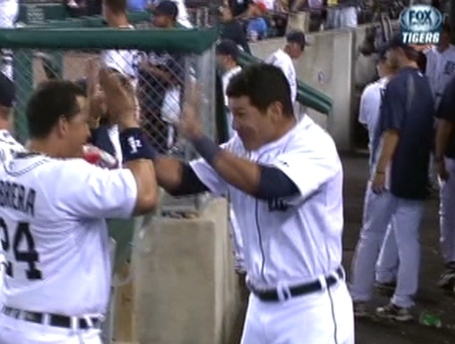 Max Scherzer: In the most important series of the season (to this point), Scherzer was nothing less than spectacular, pitching his best game of the year. His ERA is back under 4, at 3.93. Too high for Cy Young contention...but the season isn't over, and Scherzer does have 6 starts left and a real shot at 20 wins.

Avisail Garcia: A night of firsts for the rookie. Garcia had his first big league start, walk, strikeout, base hit and RBI. The hit was of the 2 out variety, giving the Tigers an important insurance run.