White Sox 6, Tigers 1: I'd like to submit a missing offense report to the proper authorities

Share All sharing options for: White Sox 6, Tigers 1: I'd like to submit a missing offense report to the proper authorities

The Chicago White Sox rode 3 home runs to a 6-1 victory over the Detroit Tigers, taking the first game in their Central division showdown. Jose Quintana cruised through 7 2/3 innings for the win. Rick Porcello took the loss, allowing 4 runs, 3 earned, in 5 1/3 innings.

The Tigers started the game like they ended the series with the Angels, badly. Austin Jackson led off with a single, but was erased after getting caught in a rundown as Miguel Cabrera struck out.

The White Sox squandered their first chance at getting on the scoreboard in the bottom of the inning. Alejandro De Aza walked, stole 2nd (though replays showed he was out), taking 3rd on a ground out. But Porcello ended the inning by striking out Paul Konerko, stranding De Aza.

In the 2nd, the Tigers took he lead, but managed to only score 1 run despite 5 base hits. How did the Tigers manage that? It wasn't easy.

Delmon Young singled through the left side with 1 out, advancing to 2nd (though not all that gracefully) on Quintana's wild pich. Peralta's fly ball fell just short of a home run, landing at the base of the left field wall. Young scored, but Peralta was out at 2nd on Dewayne Wise's on the money throw. Avisail Garcia and Omar Infante followed with infield singles, but Gerald Laird popped up to end the threat.

Yes, it did feel like the Tigers left a couple of runs on the table, but you had to hope an early lead in a huge game would bode well for this struggling team. I wished for a pony, too.

The White Sox tried to counter in the bottom of the 2nd, Alex Rios leading off with a double. But Rios was left stranded at 3rd, Porcello pitching out of the jam on Alexei Ramirez's ground out.

Porcelo has received little run support in his last several starts, and the Tigers continued the trend by leaving ducks on the pond in the 3rd. Jackson walked, Ryan Raburn ripping a single to center, setting the table for the big men in the middle of the order. But Miguel Cabrera hit into the easy 6-4-3 double play, sending Jackson to 3rd . Prince Fielder struck out looking to end an inning showing all the signs of a crooked number.

The White Sox threatened, thanks to Raburn, but did not score, thanks to Cabrera and Porcello, in the 4th. What Raburn taketh away on offense, he also taketh away on defense, dropping Wise's can of corn in left for a 2 base error (Admittedly, Jackson should have called him off). But Cabrera made a diving stop on Konerko's grounder, saving a run, throwing him out in the process. Wise would advance to 3rd on a ground out. Porcello then stranded a White Sox runner at 3rd base for the third time in 4 innings, striking out Pierzynski.

Gerald Laird doubled with 1 out in the 5th...well, you know the story. Quintana getting into trouble, but the Tigers unable to capitalize. Jackson grounded out and Raburn struck out swinging, stranding G$.

The White Sox continued to put runners in scoring position, then trolling their fans by stranding them. Gordon Beckham doubled with 2 down in the 5th, but De Aza lined out to Raburn to end the threat.

In the 6th, the White Sox threatened...and put up a crooked number.

Infante just plain dropped what should have been the 2nd out of the inning. Instead, the E-4 ignited the game wiinning rally. Konerko followed with a seeing eye single to left. Wise, running on the pitch, took 3rd. Then the roof caved in on Porcello and the Tigers.

Rios cleared the bases, drilling a no-doubt 3 run shot into the seats in left. Pierzynski made it back-to-back jacks, his solo bomb making it 4-1, White Sox. Porcello's night was over. He lived dangerously, got no run support and went down in home run flames.

Al Alburquerque come on in relief, only to see Cabrera whiff on Dayan Viciedo's ground ball. Alburquerque would ultimately get out of the inning, the White Sox...again...stranding a runner in scoring position. But the damage had already been done. With the Tigers' offense, 4 runs may just as well been 400.

In the 7th, the White Sox continued to toy with scoring, but refusing to do so. Wise walked and stole 2nd (getting a ridiculous jump). Alburquerque settled down and pitch out of the jam. With the White Sox held scoreless, could the Tigers do anything with Quintana?

Once again, a 3 run lead felt insurmountable as the last time any one saw the Tigers' offense, it was on a milk carton. Quintana looked to be on the ropes early on, but the Tigers couldn't finish him off. He survived, getting stronger as the game progressed. The only hit Quintana allowed after the 3rd was Laird's 5th inning double.

Brian Omogrosso took over for a tiring Quintana with 2 out in the 8th. With Raburn on base after walk, Cabrera rudely greeted Omogrosso by ripping a double into the left field corner. With Fielder due up and runners on 2nd and 3rd, White Sox manager Robin Ventura did what he loves to do best. Bring in a reliever.

Lefty Donnie Veal came on to face Fielder. A 4-3 ground out ended the threat. So...Yeah.

The game may have felt over, but the final nail in the coffin was the .236 hitting Beckham taking Octavio Dotel yard in the bottom of the 8th. The 2 run home run made it a 6-1 game.

Closer Addison Reed had been warming up, expecting a save situation. As he was ready, Reed came on with a 5 run lead to finish off the Tigers. 3 harmless fly balls to right later, the White Sox led the Tigers by 3 games in the Central with 22 games left in the season.

One September loss does not end a season. Even when the loss is against the team you need to pass in the standings. At worst, the Tigers need to split this series, leaving Chicago 2 games back, at the very worst. They have the pitching to do just that, even win the next 3 games. Remember, with Doug Fister, Max Scherzer and Justin Verlander pitching the next 3 games, they give the Tigers' much better than just a puncher's chance against the White Sox.

The division is still there for the taking. But with the loss tonight, the Tigers' job of making the post season got that much harder.

Time is running out. Unfortunately, the Tigers are playing like they have all the time in world.

Jackson breaking toward the bag before trying to steal 2nd base in the 1st. It ended badly. 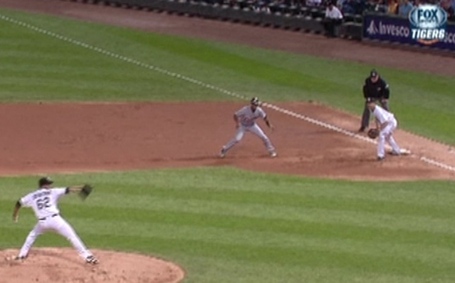 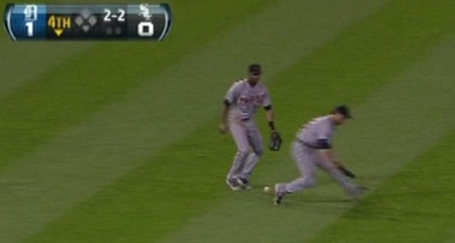 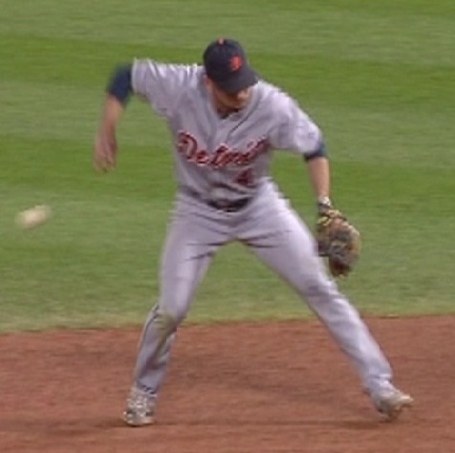 Laird was left slack-jawed by the Tigers' performance...just like their fan base. 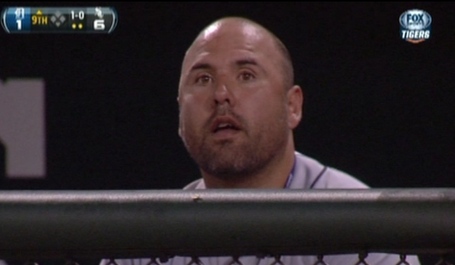 Rick Porcello: Yes, he allowed a pair of home runs. Still, he deserved better. With the lack of offense and a non-existent defense, Porcello is working without a net.

Al Alburquerque: 1 2/3 scoreless innings is as good as it got for anyone tonight.

Phil Coke: He got an out!

Any Tiger who owns a bat: The Tigers have scored 6 runs on the road trip. 'Nuff said.

Jim Leyland: I thought the fan reaction this afternoon to Raburn in the 2 hole was over the top. With that said, Raburn doesn't belong high in the order, either. If you must start someone hitting .171, you bat him 9th. Period. End of story. Leyland made his bed with Raburn. He's now lying with him iin it.

Dave Dombrowski: The mastermind behind this odd roster gets a long overdue hiss.

Anibel Sanchez received no run support from the Tigers, but received full support of the BYB community, taking PotG with 85% of the vote.