Behind the arm of Doug Fister, the Detroit Tigers ended their 4 game road losing streak, winning the 2nd game of their divisional showdown with the Chicago White Sox, 5-3. Fister was brilliant in winning his 9th game of the season, setting down the final 14 batters he faced. Jose Valverde recorded his 29th save. Jake Peavy allowed 3 runs in 5 2/3 innings, taking the loss for the White Sox.

Dewayne Wise and Gordon Beckham supplied all the offense for the Pale Hose, each hitting a solo home run. Austin Jackson and Miguel Cabrera countered by homering for the Tigers.

Everyone ready for a 3 hour roller coaster ride? Put on a helmet and let's get started.

The White Sox hit 3 home runs last night to beat the Tigers. Their homer barrage continued in game 2 of the series, taking an early lead on Dewayne Wise's solo shot in the bottom of the 1st, his 8th of the season.

After Peavy had set down 8 consecutive Tigers, Austin Jackson singled with 2 out in the 3rd. Andy Dirks singled Jackson to 3rd, setting the table for Miguel Cabrera. After battling to a 3-2 count and fouling off several pitches, Cabrera flew out to deep right center, ending the threat.

The inning was the road trip in a nutshell - Tigers threaten, but do not score.

The White Sox home run power returned in the 3rd. Leading off, Gordon Beckham's fly ball hugged the foul pole, just clearing the fence in left. It was the 2nd home run in 2 games and 15th of the season for Beckham.

2-0 White Sox. I'd be more accepting if the likes of Paul Konerko and Kevin Youkilis were going yard. But really...Dewayne Wise and Gordon Beckham?

Brennan Boesch singled off the 3rd base bag with 2 out in the 4th. Jhonny Peralta laced Peavy's first pitch deep to right center, but the ball hung up just long enough for Alejandro De Aza to run it down. saving a run. Another inning, another warning track fly.

Being the Tigers were just missing home runs, they were bound to hit one out. They were due, right? When Alex Avila just missed going deep when leading off the 5th, the all to familiar warning track out, I thought the Tigers would never hit another home run...at least in this series.

After Avila flew out, Omar Infante singled. Then...BOOM! Jackson finally got the Tigers on the board with a long home run, carrying over the Carlton Fisk portrait in left center. Jackson's 14th dinger made it a brand new ballgame at 2-2.

1 out after Jackson went yard, the Tigers' slumping MVP candidate finally, belatedly came to life. Cabrera drilled a no-doubt solo shot to deep center off Peavy, giving the Tigers their first lead at 3-2. It was Cabrera's 36th of the season.

Fister had settled in by this point, having not allowed a hit since Beckham's homer. Given a lead, he set the White Sox down in order in the 5th.

Peavy walked Peralta after 2 were down in the 6th. His 117th pitch would be his last. Time for the annual parade of relief pitches, led by Robin Ventura. The first of far too many relievers to count, Leyson Septimo, came out of the bullpen to face Avila, ending the inning on a line shot to 2nd.

Fister continued his dominance in the 6th, posting another 1-2-3 inning. White Sox fans thought Konerko had gotten a hold of one with 2 out, letting loose with a huge roar. Turned out they were fooled badly by Kornerko's big swing, Dirks catching a can of corn in medium left. No home run for the White Sox, just 11 consecutive outs for Fister.

Infante and Jackson jump started the 7th with back to back walks against the 2nd White Sox reliever of the evening, Nate Jones. Of course, Jim Leyland asked the .313 hitting Dirks to bunt for only the 2nd time this season (For what it's worth, I did not agree with the call). The bunt wasn't pretty, but a high bounce off the plate was enough to move the runners.

With 1st base empty, there was no question Cabrera would be given a free pass to load the bases. This also meant the parade of White Sox relievers proceeded unabated, Ventura bringing on lefty Donnie Veal to face the leaf-hand hitting Fielder. The pitching change worked, thanks to a little luck. Fielder hit the ball on the screws, but right to Beckham at 2nd base.

Thanks to expanded rosters, the White Sox have arms to burn. In trotted Brett Myers, the 3rd reliever of the inning (Kill me now), to face Young. In the 7th inning battle of managerial strategy, give Ventura a KO over Leyland, as the Tigers failed to score. Young grounded into a force play.

The long and fruitless half inning didn't effect Fister. He mowed down the White Sox in order for the 4th consecutive inning. Fister now having sent 14 straight batters packing since the 3rd inning.

The meat of the order failed to score in the 7th inning. So it was up to the bottom of the order to do a little damage in the 8th. They did.

Avisail Garcia was called upon to pinch hit...and was hit by 6th White Sox pitcher, Francisco Liriano. Peralta followed by blooping a single to center. De Aza dived, knocking the ball out of his reach, allowing Garcia to motor to 3rd without a throw (Damn, he's FAST). Avila singled to right, scoring Garcia. Yes, it was a hit with runners in scoring position! Tigers up, 4-2!

What's that? The bullpen phone is ringing...AGAIN? Don't answer it! But someone did, Ventura rousting up his 7th pitcher of the game. Enter Jessie Crain to face Infante, who was called on to...you guessed it...bunt. But Infante crossed us bunt haters up by laying down an absolutely perfect one for a single, loading the bases for the 3rd time.

Jackson struck out, making the Tigers 0-3 with the bases juiced. You can make it 1 -4 with the bases loaded, as Dirks, not asked to bunt this time around, ripped an RBI single to right, giving the Tigers a 5-2 lead. The inning ended when Cabrera grounded into his 27th double play of the season, but the Tigers added a couple of badly needed insurance runs.

Fister hadn't allowed a hit since the 3rd, and thrown only 99 pitches through 7 innings. I was fully expecting him to come out for the 8th. But I should have known Leyland would stick to his Tony LaRussa bullpen use bible, bringing in his setup man to start the 8th. As if it were scripted, Joaquin Benoit immediately allowed singles to Alexei Ramirez, Beckham and De Aza, making it a 5-3 game. Where's my Pepto?

8th inning, no one out, down 2 runs, Benoit is struggling and Kevin Youkilis is at the plate. So what do you do? BUNT!

Shockingly, Ventura asked Youkilis to sacrifice bunt, despite his never having done so in a game. He failed...miserably. Youkilis couldn't get the bunt down, fell behind 0-2 and struck out swinging. WHEW.

Given a free out, Benoit took advantage, striking out the pesky Wise on 3 pitches and getting Konerko on a ground ball. An inning with disaster written all over it ended with minimal damage, much in thanks to Ventura...with assists from Youkilis and Benoit.

The Tigers entered the bottom of the 9th with a 2 run lead...meaning it's Big Potato time. Jose Valverde got the call to close out the White Sox. Leading off, Alex Rios was credited with an infield single as Peralta's throw pulled Fielder off the bag. But even a good throw would have made a play at 1st a toss up at best.

Ventura then out-thought himself, and got a little unlucky to boot. He called for the hit and run with A.J. Pierzynski, sending Rios. What would have been a single up the middle was turned into a 6-3 ground out, as Peralta was moving to the bag with Rios running. Otherwise, he's not in position to make the play.

With the tying run at the plate, Papa Grande struck out Dayan Viciedo and induced Ramirez to pop up.

Tigers move back to within 2 games of the White Sox with Max Scherzer and Justin Verlander scheduled to start the next 2 games. I suddenly feel a lot better about the Tigers' chances.

I guess the season isn't over after all. 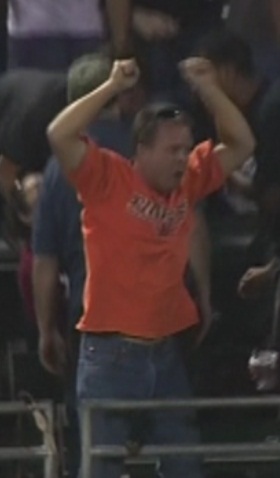 Even happier was a cheesily (creepily?) grinning Gerald Laird. 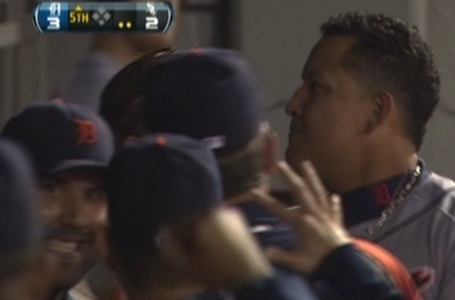 Big Potato: Be gone with you, Pale Hose! 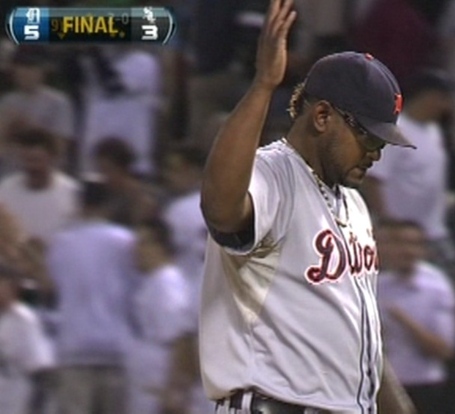 Doug Fister: It bears repeating. Momentum is the next day's starting pitcher. When Fister is that pitcher...well, you saw what happened tonight. 7 innings, 2 runs, 2 hits in what was damn near a must win game.

Miguel Cabrera: Only 1 hit, but it was a HUGE hit, giving the Tigers a lead.

Andy Dirks: Let the Neck hit! When he wasn't asked to bunt, Dirks chipped in with a pair of hits and a big late game RBI.

In a disappointing loss for a punch-less Tigers, Rick Porcello was the least culpable. Not exactly a ringing endorsement, but the pickings were slim.