The Detroit Tigers won their second consecutive game, holding on for an 8-6 victory over the Chicago White Sox in their Central division showdown. With the win, the Tigers are just 1 game back of the 1st place White Sox.

Max Scherzer allowed just 1 run in 6 innings, striking out 7, credited with his team leading 16th win. Jose Valverde nailed down his 30th save. Gavin Floyd was pulled after 4 2/3 innings, allowing 3 runs in taking the loss.

Here we go again, people. Seat belts on, heads and hands tucked safely inside. Let the roller coaster that is September baseball run!

Might as well get it out if the way early. Top of the 1st - The Tigers threaten, but do not score.

Austin Jackson led off wih a single, his hitting streak reaching 5 games. Jackson advanced to 2nd on Miguel Cabrera's infield single to short. The plate was set for Prince Fielder, who was hitless in his last 4 games. Not looking at all comfortable at the plate facing Floyd, Fielder weakly flailed at strike 3. Delmon Young ended the threat by hitting into a fielder's choice. Crap, crud, damn.

The threat disposed of, Floyd and Scherzer took center stage in a pitcher's duel for the next 4 innings.

Floyd set down the next 11 Tigers he faced, striking out 7. Cy Young had nothing on Floyd through 4 innings.

After allowing a 2 out single in the 1st, Scherzer was just as effective, 8 consecutive White Sox sent packing, striking out 5.

If you're like me, you had the feeling the game would come down to home runs.Then again, it makes sense, as that's the only way the White Sox can score.

1 out in the bottom of the 4th, the pitchers having gone 19 batters combined without a base runner, the streak ended. Youkilis crushed a belt high breaking ball into the seats in left. His 17th home run gave the Pale Hose a 1-0 lead.

Floyd's hitless steak came to an end in the 5th. Leading off, Brennan Boesch ripped a single past Youkilis at 3rd base. Jhonny Peralta followed with a walk, moving a runner into scoring position for the first time since the 1st inning.

I have a question.

5th inning, 2 on, no one out, Alex Avila at the plate. What do you do? If you know how ridiculous bunting really is, you have Avila and his .353 OBP swing away. But if you're Jim Leyland (I'm guessing Robin Ventura as well), you BUNT.

So Avila did as he was told. To his credit, it was a fine sacrifice bunt, moving Boesch and Peralta over. The White Sox did not bring the infield in, so Omar Infante's ground ball to short was good for an RBI, Boesch scoring. Jackson proceeded to make Leyland look brilliant by pulling a single through the hole, the 2 out RBI single giving the Tigers a 2-1 lead.

I'm not sure if the White Sox saw something odd, the recently off the DL Floyd was on a short pitch count, or Ventura just wanted to dip into his seemingly endless supply of relievers, but Jackson's base hit ended Floyd's night after 4 2/3 innings.

Ventura went with left-handed Hector Santiago to face Cabrera. On a 1-2 count, Cabrera took one of the uglier swings you'll ever see from an MVP candidate. Protecting the plate, he hit a 10 hopper to the right side...which somehow found short right field, Jackson scampering home with the 3rd run of the inning.

In the end the bunt worked, the Tigers taking a 3-1 lead, both runners who advanced, scored. But I still don't agree with any strategy calling for a sacrifice bunt so early in the game.

Given a 3-1 lead, Scherzer did what a starting pitcher is supposed to do, shut down the opposition after a big inning. He did just that, holding the White Sox scoreless in the bottom of the 5th.

Scherzer topped the 100 pitch mark while striking out Orlando Hudson, to end the 5th, meaning he (barring a fluke low pitch 6th) would only have an inning left in his night. Scherzer was dominant in the 6th, setting down the White Sox in order on 14 pitches, his pitch count reaching 115 on the game.

Any pitch count argument would be futile. Scherzer received the "Handshake of doom" from Leyland (Though he admitted after the game he badly wanted to get 7 innings out out of Scherzer). The game would ride on the shoulders of the Tigers' bullpen.

The Tigers put themselves in position to give their bullpen a bigger cushion with 2 out in the 7th. Dirks singled off Santiago, Cabrera doing the same off of the White Sox's 3rd pitcher, Brian Omogrosso.

Ventura walked slower to the mound than Abe Simpson with a bad hip while yelling at a cloud, giving lefty Leyson Septimo time for a few more warm up pitches before facing the slumping Fielder. A.J. Pierzynski was charged for a passed ball on Septimo's first pitch, moving Cabrera and Dirks to 2nd and 3rd, giving the big man an opportunity to break out of his slump and the game wide open.

Fielder did just that.

The Tigers looked as if they were just playing out the string against the Angels. Can't say the same now...

Given a 5 run lead, Brayan Villarreal took over for Scherzer, setting the White Sox down 1-2-3. He left the mound happily pounding his glove.

The Tigers made the game a blowout (Well, it was at the time!) in the 8th off Dylan Axelrod, the White Sox's...Hell, I've lost count.

Leading off, Peralta singled. He would score without a throw on Avila's double into the right field corner. White Sox fans immediately headed for the exits en masse. Jackson ripped a double off the wall in left, Avila strolling home with the Tigers' 8th run. The Cell continued to empty like a drain had been pulled.

After 1 was out, Villarreal threw 8 straight balls, walking Johnson and Hudson. (Where's the antacid?) Late game walks to the bottom of the order are a ridiculously HUGE non-no, so that was it for Villarreal. Leyland called on Joaquin Benoit to pitch out of the jam. De Aza rudely greeted him with an RBI single.Youkilis was even ruder, drilling a liner over the wall in left, his 3 run shot making it an 8-5 game. Hell of a time for Benoit's unfortunate knack for allowing the home run ball to return.

Thankfully, Benoit got out of the inning, keeping the ball in the park. On to the 9th, Tigers leading, 8-5.

The White Sox used their 300th and 301st pitchers (The White Sox bullpen is actually a clown car) in the top of the 9th, the Tigers going down 1-2-3.

You know what that meant. It's Big Potato time.

Alex Rios singled on Jose Valverde's first pitch, stealing 2nd without a throw. He took 3rd on A.J. Pierzynski's fly out, scoring a meaningless run on Alexei Ramirez's ground ball. Tigers still led 8-6, the bottom of the order due up.

But Johnson kept the inning alive with a sharp single to right. And for some reason, Ventura didn't go with a pinch hitter, allowing his number 9 hitter, the .183 hitting Hudson, to bat with 2 out.

The once left for dead (all of 3 days ago) Tigers can tie for the Central lead with victory tomorrow night. Justin Verlander will be on the mound. 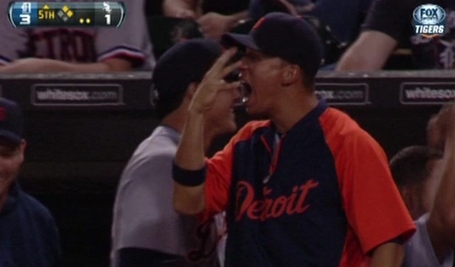 Miguel Cabrera is even more excited than ThunderClap, blasting out F-bombs as Fielder beats on his cheat. 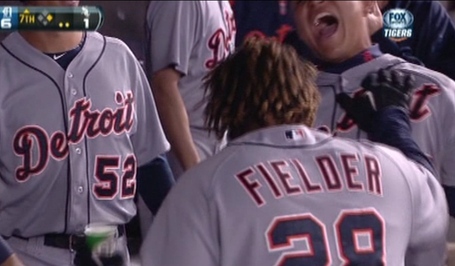 The big men demonstrably celebrate being just 1 game back of the Pale Hose! 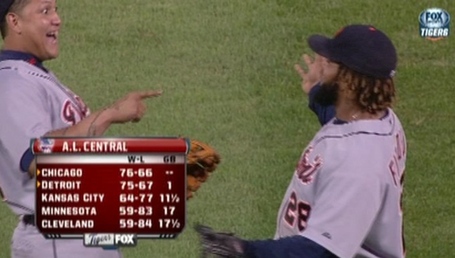 The Rod Allen Soundboard - It has sneaky power.

Prince Fielder: What better way to break out of a slump than with a clutch 2 out home run against the team you have to beat? Home run, 3 RBI.

Brayan Villarreal: Walking the 8 and 9 hitters in the 8th inning is unforgivable at any time. Leyland called it a "Loss of concentration."

In what has become a commonplace occurrence, a starting pitcher was voted PotG. Tossing 7 innings of 2 hit, 2 run baseball, while retiring the final 14 batters he faced, earned Doug Fister 2 wins - Both in the standings and as BYB's PotG.