Justin Verlander tossed 7 shutout innings, leading the Detroit Tigers to a 4-0 victory over the Cleveland Indians. Verlander allowed 6 hits while striking out 6, winning his 14th game of the season. Corey Kluber fell to 1-4, giving up all 4 Tigers runs in 5 innings of work.

Miguel Cabrera and Brennan Boesch led the Tigers' attack, each with 2 hits and an RBI. The Indians' Lonnie Chisenhall had a pair of hits, reaching base 3 times.

After an unexpected day off due to the Chicago weather, the Tigers go back to work against a team they should handle, but haven't, the Indians. Let's hop back on the roller coaster known as September baseball.

The Tigers got to rookie Tribe starter Kluber early, thanks to a pair of the oh so elusive 2 out base hit with runners in scoring position.

Cabrera started the 2 out rally with a single. The shift on, Prince Fielder followed by smoking a liner that short-hopped Jason Kipnis in short right. It was ruled a single, Cabrera taking 3rd. Delmon Young drove in the Tigers' 1st run with a line single to center. Fielder would score on Brennan Boesch's RBI single, the Tigers taking a 2-0 lead.

Early run support? What a concept!

The runs kept on a-comin' in the 3rd, the Tigers tacking on 2 more runs off Kluber. Alex Avila led off with a walk, and would score easily as Austin Jackson's RBI double rattled around the right field corner. Cabrera singled for the 2nd time, sending Jackson across the plate. The Tigers were up 4-0 and making it look easy.

The Tigers had a chance to make it a 5-0 game in the 5th. Boesch doubled with 2 out. Jhonny Peralta's ground ball found the hole in the left side, 3rd base coach Gene Lamont aggressively windmilled Boesch home. 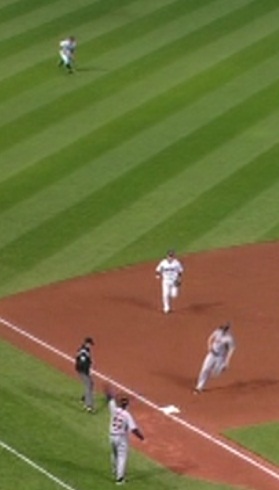 Boesch was thrown out at the plate on a bang-bang play.

The anti-Lamont crowd will say Boesch had not yet reached 3rd base as left fielder Russ Canzler picked up the ball and never should have been sent.The devil's advocates will reply you want your 3rd base coach to be aggressive and it took a perfect throw to nail Boesch.

I'll let you make the call in the comments.

Verlander was effortlessly cruising through the Indians order, allowing just 1 hit in 4 innings.But the always irritating Indians started to make some noise. Casey Kotchman led off the 5th with a single, Chisenhall would double him to 3rd.

So here's the scenario: 4-0 lead, runners on 2nd and 3rd, no one out, and it looked as if Verlander was in trouble.

Nah. Verlander had it all under control...well, kinda.

The next batter, Matt LaPorta, grounded out 1-3, Verlander looking Kotchman back to 3rd. He would strike out Ezequiel Carrera for the 2nd out. Number 9 hitter Jason Donald then poked a ground ball down the 1st base line with double written all over it. Fielder broke out the eraser, saving 2 runs with a diving stop, Verlander covering 1st for the out. The Tigers' lead would remain at 4.

The Tribe would threaten again the 6th., and the Tigers' defense would bail out Verlander for 2nd consecutive inning.

Shin-Soo Choo singled, Carlos Santana doubled off the base of the right field wall, once again putting runners in scoring position with less than 2 out. Verlander bore down, Canzler popping up to short right for the 2nd out. Kotchman made a bid for a 2 RBI double with a sharply hit ground ball which looked headed to left. But Cabrera flashed the glove leather, robbing Kotchman of an extra base hit with a diving stab, throwing him out to end the inning.

The offense, having scored early, went back into a deep, deep slumber. The last Tigers hit of the game was Peralta's single in the 5th.The Tribe bullpen would retire the final 12 batters they faced.

Verlander received the "Handshake of DOOM" from Jim Leyland after the 7th inning, having thrown 110 pitches. The Tigers' old-school manager went by his trusty bullpen bible, calling on Joaquin Benoit to start the 8th. It was a long slog for the Tigers' setup man, but Benoit set down the Tribe in order.

You know what meant. Time for the Big Potato.

Pitching in his 3rd consecutive game, Jose Valverde took the mound. As is Papa Grande's wont, he allowed a base runner, but was never in any serious trouble.

There would be no need for antacid tonight. Carrera popped up to Peraltra...GAME OVER.

Have the Tigers gotten the monkey known as the Indians off their back? Too early to say, but tonight was a good start. 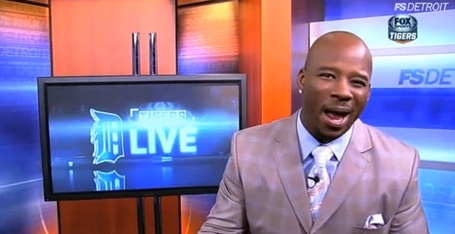 If you click on Rod Allen's teeth in the picture 2nd from the right on the Rod Allen Soundboard, you'll hear, "OH JACKSON!!!"

Avisail Garcia and Bruce Rondon honored as organization's players of the year. Mini-Miggy in right field and Rondon the closer in 2013! Let the speculation and overreaction begin!

Prince Fielder, thinking there were 3 out, heads for the dugout with 2 down in the 4th,. 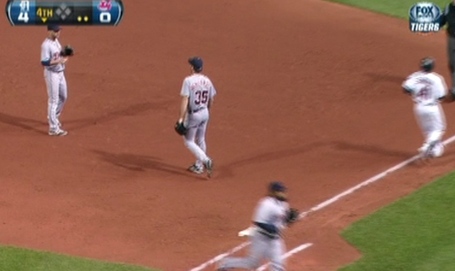 Fielder asks for water to cover his brain fade. That's why Prince gets the big bucks - Quick thinking. 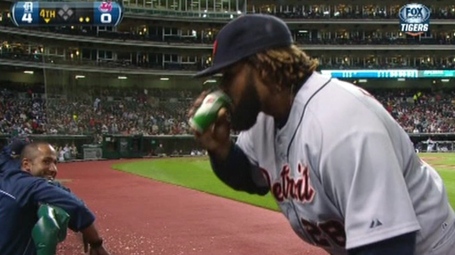 Fielder made up for his humorous brain lock in the 5th. Robbing of Jason Donald of a double saved 2 runs, bailing Justin Verlander out of a huge jam. 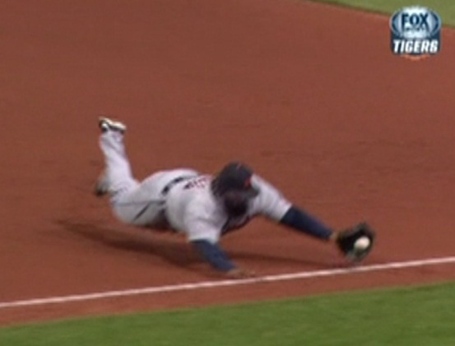 Verlander was quite happy with his rotund 1st baseman. 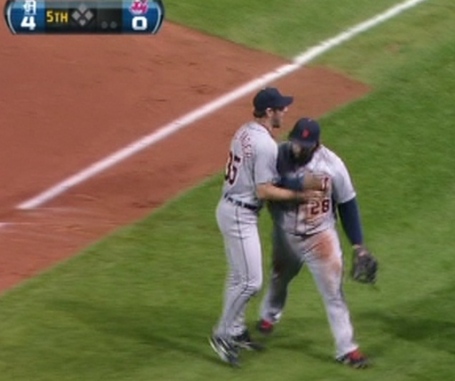 It was Miguel Cabrera's turn to save Verlander's bacon in the following inning. This diving stop on Casey Kotchman's ground ball also saved 2 runs, ending the inning. 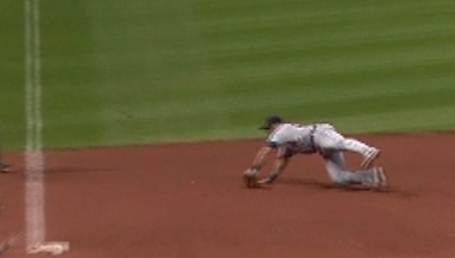 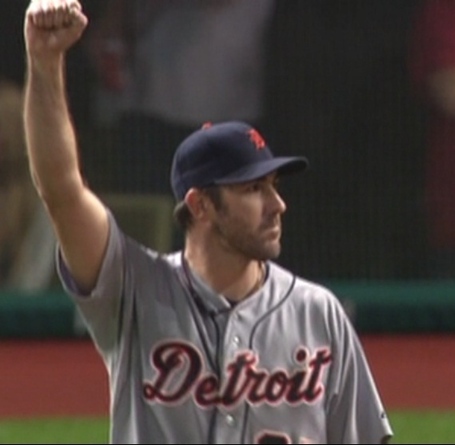 Miguel Cabrera: Led the Tigers with 2 hits while saving 2 runs with his glove. Remember when the media consensus was moving Cabrera to 3rd base was disaster waiting to happen?

Brennan Boesch: 2 hits and an RBI deserves a roar.

The offense after the 5th: The last 12 batters going down, and 19 of 21, is a disturbing statistic. Even more so when you realize it's the freaking Indians.