Anibal Sachez pitched 6 2/3 no-hit innings, leading the Detroit Tigers to a 5-3 victory over the Cleveland Indians. Sanchez would ultimately give up 2 hits and 2 runs in wining for the first time in 4 starts. Jose Valverde pitched a 1-2-3 9th for his 31st save. Justin Masterson stuck out 8, but also allowed 4 runs (2 earned) in 4 2/3 innings of work, getting tagged with the loss.

The Tigers were paced on offense by Alex Avila's 3 hits and Miguel Cabrera's 37th home run. Carlos Santana broke up the no-hitter with a 7th inning triple for the Tribe.

The Tigers have played the Tribe twice, scoring 2 runs in the opening inning of each game. It's was deja vu all over again!

Masterson opened the game by alternating strike outs and walks. Austin Jackson and Miguel Cabrera whiffing, Andy Dirks and Prince Fielder working base on balls. The streak ended when Brennan Boesch ripped a ground ball through the wickets of 3rd baseman Lonnie Chisenhall into short left, Dirks easily scoring on the E-5, Fielder advancing to 3rd. The Tigers big 1st baseman scored on Alex Avila's opposite field single, the Tigers taking a 2-0 lead.

Using a stolen base to get a runner in scoring position, the Tigers would threaten in both the 2nd and 3rd innings. But Omar Infante was left stranded in the 2nd, Boesch in the 3rd.

The Tigers' aggressive base running continued in the 4th, leading to another score. Quintin Berry led off with a line single to right. He would take 3rd on Infante's single, and score on Jackson's sacrifice fly to make it 3-0 Tigers.

Infante would steal the Tigers' 3rd base of the game, swiping 2nd and advancing to 3rd on a bad throw. Infante was left stranded, but the Tigers had rocketed Masterson's pitch count to 90 in just 4 innings.

In comparison, Sanchez needed only 47 pitches to get though 4 innings, facing the minimum. The only base runner allowed to that point was Shin-Soo Choo, hit by a pitch leading off the 4th. He was duly eliminated on a 4-6-3 double play.

This is when I realized Sanchez was working on a no-hitter.

Boesch reached base for the 3rd consecutive time in the 5th with a lead off walk. Once again running on Masterson, Avila and Boesch worked the hit an run to perfection. Aviila doubling into the right field corner, Boesch able to stroll home with a 4-0 lead.

Having thrown 105 pitches, Masterson was pulled after Berry's single in the 5th.

The Avila - Berry "situation" deserves its own sidebar.

With Avila was still on 2nd base with 2 out in the 5th, Berry slapped a grounder towards the hole in the left side. Knowing there was no way in Hell he could get the speedy Berry at 1st, shortstop Asdrubal Cabrera threw toward 3rd base trying to nail Avila. The throw beat both Avila and Chisenhall, bouncing toward the dugout. Avila was able to score on the 3rd Tribe error of the game.The Tigers were up 5-0.

Not so fast. Here's where it got confusing,

Then Berry was caught stealing...twice. He took off for 3rd, hoping to catch Tribe reliever Tony Sipp off guard. Sipp wasn't, and would have been out at 3rd base but the umpires ruled the ball had yet to be put in play. For some reason, Berry immediately tried it again, and was out by 10 feet. Reports on Twitter from those listing to the Tigers' radio network reported Dan Dickerson thought the reason Berry took off was Avila had missed 3rd base and Berry was trying to stop an appeal. Mario Impemba, calling the game for FOX, confirmed the ruling at the start of the 6th inning, the Tigers' run having been pulled off the scoreboard. Avila had been ruled out, having never touched 3rd. 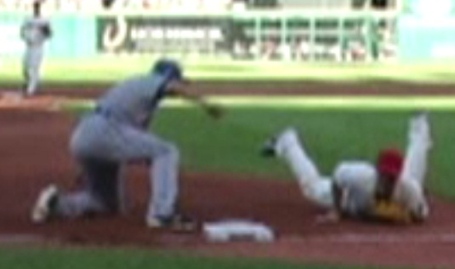 @beckjason Rule 7.10 "Any appeal under this rule must be made before the next pitch, or any play orattempted play" makes sense for QB now

All in all, the appeal/caught stealing was a fiasco wrapped in a debacle. But the Tigers still led 4-0.

Back to your regularly scheduled possible no-hitter in progress.

Sanchez remained on cruise control, continuing to set the Tribe down in order through 6 innings. With 2 out in the bottom of the 6th, the Tribe made a bid to end it. Infante kept the no-hitter alive. The Tigers' 2nd baseman ranged well over to the SS side of the bag to backhand Lou Marson's ground ball, making a leaping throw to nip the slow of foot catcher.

There was the highlight reel play you see almost every no-hitter. The pieces were falling into place.

The Tigers got their revoked run back in the 7th, extending their lead to 5-0. Leading off the inning, Cabrera's line shot just cleared the wall in right, the solo shot his 37th home run of the season.

The Tigers would go on to load the bases after Cabrera's big fly. Called to on to take over for Sipp, Cody Allen struck out a pinch hitting Delmon Young and Infante to end the threat.

But at this point, with a 5 run lead and only 9 batters away from a no-hitter, all eyes in baseball were on Sanchez.

Having set down the first 2 Indians he faced in the 7th, Sanchez went to a 3-2 count on Santana. He would drill the next pitch to dead center over the head of Jackson, who was unable run the ball down. Santana's drive would hit off the wall and roll away from Jackson, ending up with a stand-up triple.

The no-hitter was no more.

After the next batter, a shutout was no longer in play, either. Cabrera would score on Russ Canzler's double. Chisenhall followed with an RBI single to center. Jim Leyland looked to have bounded out of the dugout before the ball even hit the ground, ending Sanchez's afternoon.

After all the drama, the Tigers were left holding a 5-2 lead.

Just as the bullpen bible says, setup man Joaquin Benoit started the 8th inning for the Tigers. Keep in mind Benoit was pitching for the 4th time in 5 games, and Brayan Villarreal was up in the pen as well.

Benoit allowed a pair of base runners, rookie Cord Phelps' lead off single, Choo's walk with 2 out putting a runner in scoring position. Benoit got a ground ball off the bat of Cabrera, but it found the hole in the right side for an RBI single, the Tigers' lead shrinking to 5-3. Having just broke up the no-hitter, Santana strode to the plate with a chance to make things really interesting, He didn't, thank you, grounding out to Fielder.

Just like last night, the Indians' late game relievers completely shut down the Tigers' offense. Entering the game with 1 out in the 7th, Allen faced 5 Tigers. All 5 struck out. The Tigers would also go down in order in the 9th against the 4th Indians' pitcher, Scott Barnes.

The game would now ride on the goatee of the Big Potato.

Turns out, Jose Valverde was off his normal game. By off, I mean there was NO DRAMA. Papa Grande didn't allow a base runner, sending the Tribe packing 1-2-3.

Is everyone feeling better about the Turner trade now?

Bullets are brought to you by 80's rocker Eddie Money: 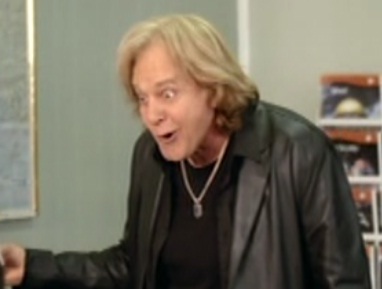 After striking out, the Neck's smile reflects his thoughts on the home plate umpire's strike zone...which are unprintable. 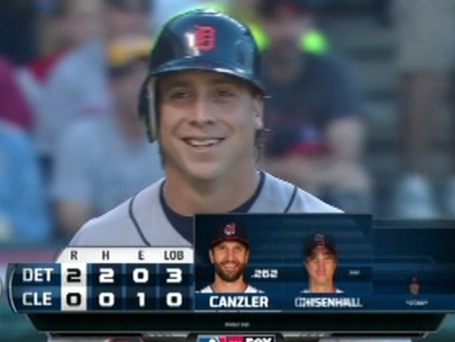 This is the haunted look of a man who has just had his no-hitter spoiled. 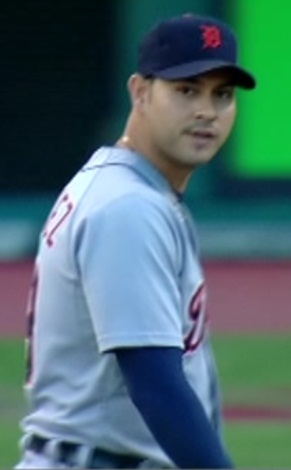 The Potato, making what Tom Verducci called an "entrance." 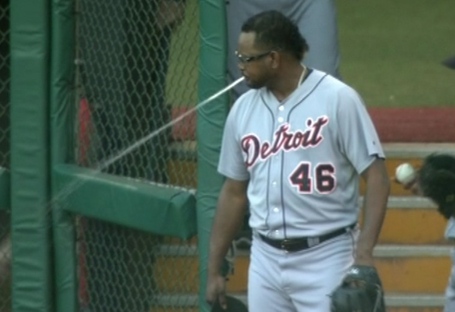 Anibel Sanchez: Carry a no-hitter into the 7th, get a roar. No, you get a ROAR. Sanchez won for the first time since August 22nd, despite allowing only 6 earned runs in his last 5 starts.

Alex Avila: 3 hits, reached base 4 times, 2 RBI. I can forgive him for missing 3rd base in the 5th...though my head is still spinning over the entire mess.

Omar Infante: 2 singles, 2 stolen bases and the defensive play of the game for the Tigers. His bat is finally perking up after a long slump.

Joaquin Benoit: Was not at all sharp, needing 25 pitches to get out of the 8th.

7 shutout innings and a W was more than enough enough for Justin Verlander to keep the streak of starting pitchers winning the BYB PotG vote alive.