The Cleveland Indians walked off against the Detroit Tigers, Lonnie Chisenhall's single scored Carlos Santana with the winning run. Tigers' closer Jose Valverde was tagged with both a blown save and his 3rd loss. Esmil Rogers, the 4th and final Indians pitcher, vultured the victory.

Day 3 of the Tigers scoring 2 runs in the top of the 1st inning against the Indians. Next verse, same as the first, deja vu all over again.

Getting a surprise last minute start in left due to Austin Jackson's bum ankle, Andy Dirks singled. Miguel Cabrera, never a surprise starter, followed with a single to right. Delmon Young walked, which is always a surprise.

Bases loaded, 1 out, Brennan Boesch at the plate, Jimenez on the mound. Boesch let loose with a mighty swing...dribbling a nubber to Jimenez. Boesch's swinging bunt would have been a bang-bang play at 1st, but Jimenez short armed the throw, short hopping Casey Kotchman, the ball ending up in right field foul territory. Dirks and Cabrera scored without a throw, Tigers taking a 2-0 1st inning lead for the 3rd consecutive game.

The Tigers stretched their lead to 3-0 in the 3rd inning. Cabrera ripped a line drive off the wall in left, a ball hit so hard he had to hustle into 2nd for a double. Prince Fielder was intentionally walked. Young foiled the strategy, ripping an RBI single to right.

The Indians got on the scoreboard in the 4th, getting a little lucky in the process. Canzler led off with a single. Tigers' ex-pat Jack Hannahan smoked a double into the right field corner. Instead of crossing the plate, Canzler could only advance to 3rd, having come to a complete stop between 2nd and 3rd. 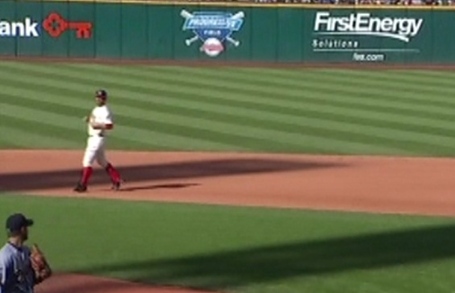 Why? Turns out Fielder deked him, jumping up and slapping his hand inside his glove, Canzler thinking the ball had been caught. 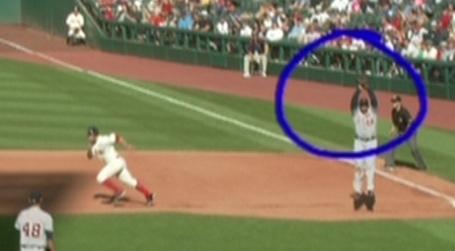 Shin-Soo Choo bailed out Canzler, blooping a 2 RBI single off his fists into short left, the Tribe pulling to within 1 at 3-2.

Thought that half inning was weird? Then you didn't see the bottom of the 5th.

Porcello induced the Indians into hitting 4 double play balls. Yet the Tigers didn't turn a single one. As you would expect, given a 7 out inning, the Tribe took the lead, Porcello was knocked out of the game and Jim Leyand was tossed.

Leading off, Cabrera singled, but it looked as if he would be eliminated on Santana's double play ball to 2nd.

Well that happens...more so to the Tigers, of course. But the Tigers decided to make Porcello's life as a ground ball pitcher on a team with God awful infield defense even more difficult.

Missed double play #2 - Brantley hit a tailor made double play ball to Peralta, but the Tigers nonchalanted a sure GIDP into a fielder's choice, Fielder barely bothering to stretch on the play. Cabrera advanced to 3rd, Brantley safe at 1st, just 1 out.

Then it got completely ridiculous.

Then came the coup de grace.

Missed double play #4 - Chisenhall broke his bat, grounding to Porcello, who made a nice side arm throw for the out at 2nd. But once again, the Tigers could not turn the double play. Peralta's throw was in the dirt, Fielder making the scoop. Chisenhall was ruled safe by 1st base umpire Brian Knight, a call which could have gone in either direction.

Brantley scored on the 4th blown double play, the Tribe taking a 4-3 lead. The Tigers complained, long, loud and bitterly, but to no avail. Leyland steamed out of the dugout, one mission on his mind...get his ass tossed. He did.

Circus music still playing in the background, Kotchman slashed a single to left, ending Porcello's miserable afternoon. Drew Smyly came on, ending the inning by taking the Tigers' defense out of the picture, striking out Hannahan.

Things went from bad to worse in the following inning. The Tribe made it a 5-3 game thanks to a blown call by Knight.

Cabrera singled, bringing Santana to the plate.On what should have been the 3rd out, Alex Avila was knocked out of the game by Fielder, colliding on a foul pop up. Fielder's elbow clocked Avila square on the jaw. 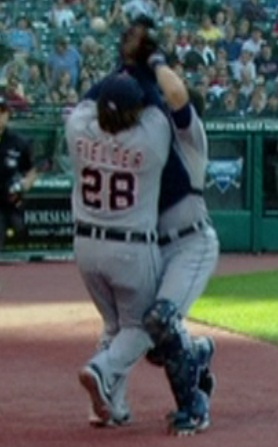 Even if he wasn't concussed (though I would not be surprised if he was), Avila dropped to the turf like a rock, seeing stars. 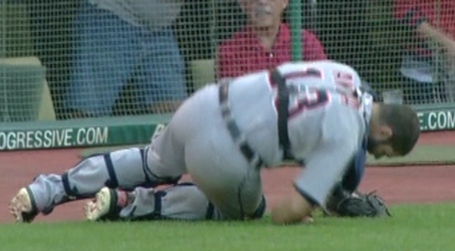 Avila left the game under his won power, Gerald Laird now wearing the tools of ignorance.

Given a new life, Cabrera would steal 2nd without a throw, and score on Santana's single. Hold on, I'm getting ahead of myself.

it wasn't really a single. Cabrera made a diving stop of Santana's ground ball, throwing him out from his knees, Fielder making the sweep tag on the high throw. 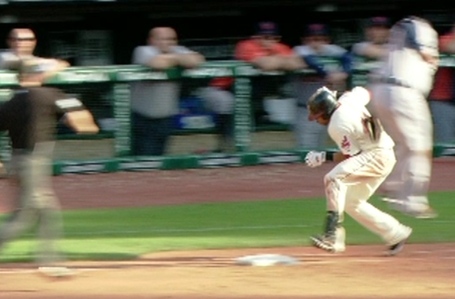 Thanks to some bad breaks and just plain embarrassing defense, what had been a 3-0 lead had become a 5-3 deficit.

Were the Tigers reeling? Their fans may have been, but the Tigers themselves? Not so much. Not yet, anyway.

Joe Smith took over for Jimenez after 6 innings. Infante greeted him by singling with 1 out in the 7th. After 2 were out, Dirks kept the inning alive by drilling a single into left, bringing up the Tigers' MVP candidate, Cabrera. Smith's 1-0 breaking ball was belt high, middle of the plate. Doing what MVP candidates do, Cabrera crushed Smith's meatball, drilling a huge 3 run home run into the seats in left. His 38th big fly of the season gave the Tigers a 6-5 lead.

Now the pitcher of record, Smyly gave temporary manager Lloyd McClendon 2 1/3 innings of solid 1 run relief (and it should have been shutout relief, save for the blown call).

McClendon used 2 arms to get through the 8th. Brayan Villarreal getting the 1st out, Phil Coke finishing the inning on 12 pitches.

The Tigers threatened, but did not score in the 9th. Berry doubled, taking 3rd on a wild pitch as Dirks walked. The Tribe's Esmil Rogers struck out Cabrera and got Fielder on a ground ball, keeping his team within a run.

Time for a tired Big Potato. He was soon a Roasted Potato.

As if on cue, closer Jose Valverde allowed a lead off double to Jason Kipnis. Cabrera just missed a run scoring bloop double, Knight calling the ball foul. Inconclusive replays showed Knight may have done the Tigers a solid, making up for his earlier faux pas. Cabrera would pop to center for the 1st out.

But Santana made the Tigers pay for the 2nd consecutive game. After breaking up Anibal Sanchez's no-hitter yesterday, he would triple off Don Kelly's glove in right. Kelly leaped, the ball hitting in the heel of his glove, popping out before he crashed into the wall. By the time Kelly gathered his senses, Santana was on 3rd and the Tigers were neck deep in trouble.

The Tigers did the only thing they could do, walk the bases loaded and bring everyone in tight. Obviously gassed, Valverde continued to throw batting practice. Chisenhall quickly ended the game with a walk off single, driving a liner into the right center field gap.

The Tigers fall 2 back of the White Sox in the most painful way possible.

1. I think we all saw Valverde's implosion coming. Pitching as much as he has over the past week, I was not one bit surprised Potato was lit up. With Joaquin Benoit given the day off, I have wonder if Octavio Dotel would have been a better option...then I remember that awful 9th inning in Seattle early in the season. The Tigers were screwed.

2. I'll take going 2 of 3 on the road in Chicago and Cleveland. But in giving this game away, the Tigers find themselves in a position where tomorrow is as close to a must win game as it gets.

3. Want to get upset, get upset over the Tigers losing 2 of 3 to this lousy Indians team last week, and ending the season 8-10 against them. If the Tigers miss the post season, the season series with the Tribe will be a big reason why.

4. Give any MLB team a 7 out inning, they will make you pay dearly. The defensive play...well, you all saw it. The lousy defense likely cost the Tigers a win and definitely the services of Avila.

5. The season isn't over. Not even close. The Tigers have 17 games remaining. 1 with the White Sox, 3 against the Athletics, both have a winning record.. But the final 13 games are against the Twins and Royals, a combined 31 games under .500. The Tigers start a 10 game home stand on Tuesday, 7 of the games are with the bottom feeding Royals and Twins. If the Tigers can't club those 2 teams into submission, especially with their quality starting pitching, they don't deserve to win the Central.

6. In over 40 years of baseball fandom, I've never seen an inning like the bottom of the 5th. May our ancestors never have to suffer through such a...Hell, I still can't describe it.

Bullets are brought to you by a car driving, adult woman dating, goateed talking baby. 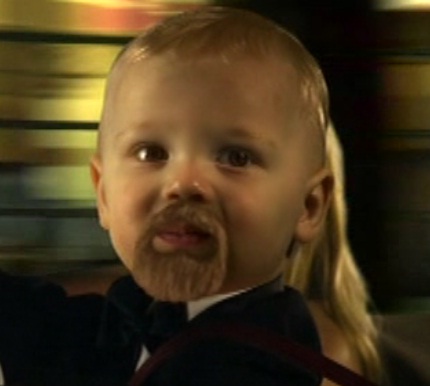 Austin Jackson was scratched from the starting lineup due to a sore ankle. Quintin Berry replaced Jackson, getting the start in the center. Andy Dirks was added to the lineup, playing left field. The Tigers' center fielder suffered the injury while running into the wall trying to save Anibel Sanchez's no-hitter in the 7th inning Saturday.

Jackson is listed as day-to-day...as are we all. Jackson is expected to play in Chicago.

SCREEN CAP OF THE GAME:

Jim Leyland telling Brian Knight what to do with his finger. 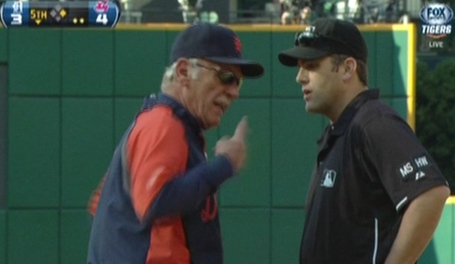 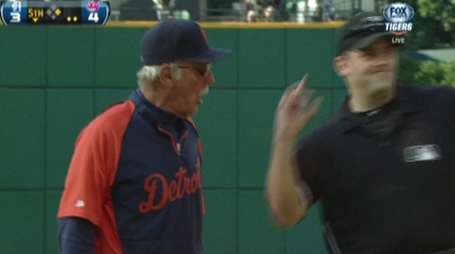 Dave Dombrowski having a moment of clarity, realizing, "What have I done?" 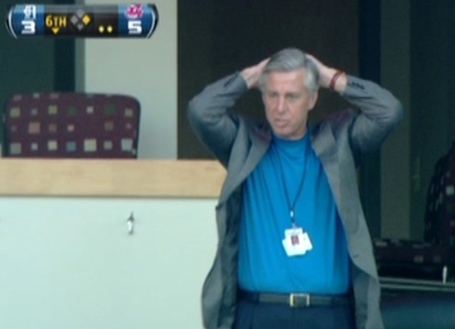 Miguel Cabrera cracking a smile as he rounds 1st after his 3 run bomb. 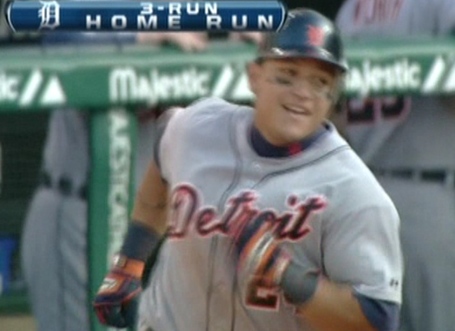 Brayan Villarreal and Phil Coke: Stepped for Benoit with no problem.

Anyone using a baseball glove wearing the Olde English D. From the butchered double plays, to Avila being cold-cocked (and you could make an argument Kelly, in for his defense, should have caught Santana's drive), this game will go down in the baseball annals...for all the wrong reasons.

Jhonny Peralta: In a horrific slump, Peralta is hitting .192 with a .492 OPS on the road tip. His 0-4 today drops both numbers even further.

It could be none other than Anibal Sanchez for taking a no-hitter into the 7th inning, leading the Tigers' to a 5-3 victory over the Indians. Sanchez received an overwhelming 90% of the vote.