In the final game of the season between AL Central contenders, the Chicago White Sox came from behind to beat the Detroit Tigers 5-4, extending their lead to 3 games with 16 left to play. Doug Fister allowed 5 runs in 4 innings, taking the loss. Nate Jones, the 2nd of 6 White Sox pitchers, tossed 2 2/3 innings of 1 hit relief for the victory.

Delmon Young led the Tigers' attack with 2 hits and 3 RBI. Dewayne Wise paced the White Sox with 3 hits and 2 RBI.

The Tigers threaten, but do not score in the 2nd.

Hustling out of the box, Prince Fielder legged out a lead off double. Delmon Young made it 2 on with no one out when starting pitcher Jose Quintana pitch hit him in the back foot. Jhonny Peralta, in a brutal slump on this road trip, hitting .167 in 9 games, had his bat shattered by Quintana. It resulted in a slow roller to short..and the White Sox were still able to turn a 6-4-3 double play. Brennan Boesch ended a hugely frustrating half inning by striking out on a breaking ball far out of the strike zone.

After a Fister 1-2-3 2nd inning, the Tigers strung 3 seeing eye singles together to a take a 1-0 lead in the 3rd. Avisail Garcia grounded a lead off single to center. Gerald Laird followed by blooping a single into short right, Garcia holding at 2nd. Austin Jackson would ground an RBI single through the hole in the left side, the speedy Garcia scoring without drawing a throw.

Jim Leyland, ticking off most of the Tigers fan base, had Omar Infante bunt the runners over, taking the bat out of the hands of Miguel Cabrera. The White Sox intentionally loaded the bases, walking the Tigers' MVP Candidate, in order to set up a left-lefty Quintna-Fielder matchup.

The small ball strategy appeared to blow up in Leyland's face, Fielder striking out, flailing at a pitch out of the zone. With a squander on the horizon, it was Young who bailed Leyland out. First pitch swinging, his looping liner over short fell for a 2 RBI single, Laird and Jackson crossing the plate.

A wild pitch moved Cabrera and Young into scoring position, forcing Quintana to intentionally walk Peralta. Not that it was a bad strategy, as it brought up Boesch. He promptly struck out for the 2nd consecutive at bat with runners in scoring position, ending the inning.

Uncharacteristically, Fister found himself in a huge jam after the Tigers put up a crooked number. Dayan Viciedo and Alexei Ramirez started the inning with back-to-back singles. With 1 down, Dewayne Wise singled through the right side, Viciedo holding at 3rd, loading the bases.

Fister then did a nice job of taking the Tigers' defense out of the equation, ending the inning on his own. He struck out Kevin Youkilis... 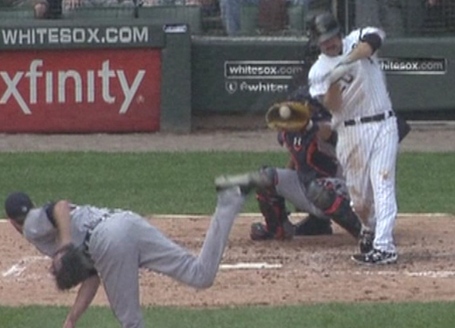 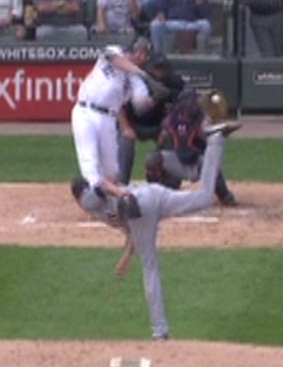 Flashing the glove leather, Viciedo robbed Laird of a double in the 4th. But on nearly the exact same play on the next at bat, Viciedo dropped Jackson's liner for a 3 base error. But Infante, doing his best to convince Tigers fans the 2nd base jinx (all who play there, suck) lives, popped up to end the threat.

The White Sox threatened again in the 4th, loading the bases with 1 out for the 2nd consecutive inning. This time it was a pair of singles and a walk getting Fister in deep. Ramirez swing at the first pitch for the 2nd out, a humpback liner to Peralta. But Fister threw an inside breaking ball to light hitting Gordon Beckham, nicking him on the elbow, making it a 3-1 game. The bases remained loaded.

Struggling with his command and the Tigers' bullpen stirring, Fister grooved a 3-1 fastball to Wise which he drilled into center, a 2 RBI single tying the game at 3-3. Youkilis followed by ripping a liner which was headed to left for an RBI single, but Petalra's diving stab kept the score tied, getting Fister out of further trouble,

Cabrera led off the 5th, smoking a double over 3rd base. Fielder hit a high hopper to1st base, and was called safe, beating Qunitana to the bag. Or did he? 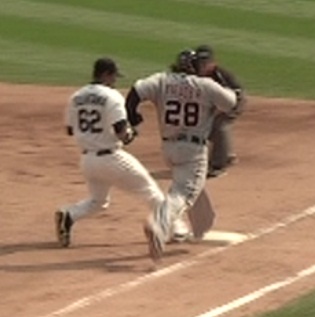 1st base umpire Mike Muchlinski must have thought Qunitana missed the bag. The White Sox complained to high Hell. It was to no avail, the call setting up the Tigers with runners on the corners. With Young due up. Robin Ventura would end Qunitna's afternoon, calling Jones out of the bullpen.

Quickly falling behind 0-2 to Jones, Young lined the 3rd pitch of the at bat into center for an RBI single and 4-3 lead. But the rally ended ingloriously. Peralta grounded into his 2nd double play of the day, followed by Boesch ending an inning for the 3rd straight at bat with a runner on 3rd, grounding to short.

In vain hope of getting 1 more inning out of Fister, Leyland sent him out to start the 5th. Fister immediately allowed a single to Dunn and a double to Paul Konerko. Leyland pulled his starter...2 batters too late. Reliever Al Alburquerque made a bad situation worse, walking Álex Ríos.

A.J. Pierzynski then smoked a line shot directly at Boesch, Dunn too slow of foot to tag up. 1 out, Tigers still leading 4-3. Then the worst thing possible happened.

Alburquerque got a double play ball.

Viciedo hit a tailor made double play grounder to Peralta, making the toss to Infante for the force. But Infante was clipped by a barreling into 2nd base Rios. The relay was in the dirt, Fielder not getting a glove on the throw as it skipped into the dugout. 2 runs scored on the throwing error, the White Sox up 5-4 when the inning should have been over with the Tigers leading 4-3.

After the Tigers went down in order in the top of thew 6th, Alburquerque walked Beckham and Youkilis. 1 out and runners on 1st and 2nd, Leyland had seen enough of Alburquerque, bringing on Phil Coke as a LOOGY to face he of the 3 true outcomes, Dunn. A true outcome was exactly what Coke got by striking out Dunn.

Having done his job, Coke was pulled. Octavio Dotel took on Konerko, who would pop up to end the threat.

Down by a run, the Tigers would struggle against Nate Jones and Donnie Veal, going down in order on just 22 pitches total in the 6th and 7th.

The infield actually (GASP) made plays in the 7th, turning a 4-6-3 double play on Pierzynski and Infante getting the 3rd out on an excellent leaping throw to nip Viciedo. NOW they look good.

Top of the 8th, once again the Tigers went down in order against Brett Myers.

Dotel ran out of gas in the bottom of the 8th, Beckham walking, Wise doubling him to 3rd. Brayan Villarreal took over, and proceeded to load the bases by hitting Youkilis. Dunn launched a sure fire sacrifice fly to left, Beckham tagging.

Luckily, Wise did something incredibility stupid, running the White Sox out of both an insurance run and the inning by trying to to tag up from 2nd. Garcia's on the money throw to Cabrera nailed Wise before Beckham. who had eased up, could cross the plate.

Replays confirmed Cowboy Joe West made the correct call. The Tigers were still hanging on for tear life, not yet heading towards the white light.

Down 1 run instead of 2, Leyland went to his bench, hoping to catch a 9th inning pinch hit in a bottle. Quintin Berry pinch hit for Garcia, and grounded out. Leyland had Andy Dirks pinch hit for Laird, Robin Ventrua countering with Matt Thornton to take over for Myers. Score 1 for Ventura, Myers struck out Dirks.

Jackson flew out to right, the 14th and final Tiger to go down in order.

The Tigers are 3 games back with 16 left to play. I'll give you a tiny bit of hope The 1987 Tigers were 3 1/2 back with 8 games left in the season. They would win the Eastern division by 2 games over the Blue Jays.

Then again, the Tigers finished the 1987 season with 3 games against the Blue Jays, beating them head to head. The 2012 Tigers don't have that luxury, having finished their season series with the White Sox..

The Tigers have left themselves absolutely no margin for error.

Bullets are brought to you by 2 folks who are absurdly giddy to see Brian Urlacher shill cable TV service. 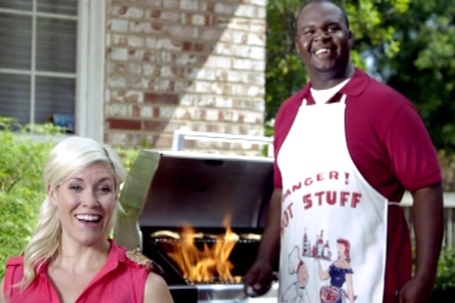 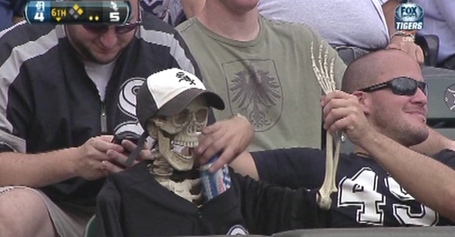 At least the guys above showed up, The upper deck of The Cell was barren of life.

Delmon Young: Led the the Tigers with 3 RBI.

Brennan Boesch: Brutal, brutal game at the plate, hitless in 4 at bats with 3 strike outs and 5 LOB, 3 of those left standing at 3rd.

Doug Fister: Came up short in a must-win game.

Omar Infante: Doing his damnedest to convince fans to not want him as the Tigers' 2nd baseman for 2013.

Defense: For the want of a double play, the Tigers find themselves down 3 games to the White Sox. I've played on beer fueled softball teams who could turn double plays better than the Tigers.

Miguel Cabrera breaks the streak of Tigers starting pitchers dominating the PotG voting, winning with 87% of the BYB vote.