Miguel Cabrera hit a pair of home runs to lead the Detroit Tigers to a 12-2 victory over the Oakland Athletics. Darin Downs took the win in relief of Tigers' starter Max Scherzer, who left after 2 innings with a fatigued pitching shoulder.

Miguel Cabrera hit a pair of home runs to lead the Detroit Tigers to a 12-2 victory over the Oakland Athletics. Darin Downs took the win in relief of Tigers' starter Max Scherzer. A.J. Griffin allowed 5 runs on 8 hits in 4 2/3 innings, taking the loss for the A's.

Scherzer was pulled after 2 innings with a fatigued right shoulder. An MRI came back negative, showing no structural damage. He will be re-evaluated in a few days.

In addition to Cabrera's monster game for the Tigers, several Tigers contributed on offense. Austin Jackson and Gerald Laird had 3 hits. Quintin Berry and Prince Fielder added 2 RBI each, Fielder tacking on a home run.

The A's got on the board thanks to two of the more painful things to watch as a fan -- the 2 out walk and 2 out rally.

Josh Reddick ignited the inning with a single. He didn't hit the his looping liner hard, but it was hit in right place, right up the middle. He would take 2nd after Scherzer pitched around Yoenis Cespedes, walking him on 4 pitches. Ahead in the count 2-1, Brandon Moss made it a 1-0 game, hitting a ground ball just out of the reach of a diving Omar Infante.

The Tigers got the run right back in their half of the inning. Austin Jackson ripped a line shot single off the glove of Griffin, who couldn't find the ball after the deflection. Quintin Berry sent Jackson to 3rd with a hard hit single to right. Cabrera would tie the game at 1-1 on a sacrifice fly.

There was both good and bad from Scherzer in the 2nd inning. The good? He recorded strike outs number 3 and 4, holding the A's scoreless. The bad? He also walked his 2nd batter and ended the inning with a dangerously high pitch count of 44.

Jhonny Peralta went to the opposite field for his 12th home run of the season. The no-doubt solo shot gave the Tigers a 2-1 lead.

During the Tigers' half of the 2nd inning, FSD cut to reliever Darin Downs throwing in the bullpen. No one thought a thing about it, believing Downs was just getting some work. Shockingly, it was Downs who was on the mound in place of Scherzer in the top of the 3rd.

The Tigers reported Scherzer left the game due to what is being called "right shoulder fatigue" and would undergo an MRI.

With Scherzer going down, it would be all hands on deck in the bullpen, starting with Downs. He allowed a pair of base runners on a walk and single, but struck out Stephen Drew to get out of a 1st and 3rd jam.

Cabrera stretched the Tigers' lead to 3-1 in the bottom of the 3rd, crushing a Griffin change up far into the left field seats, landing just short of the scoreboard. The solo home run was his 39th of the season.

Downs found himself in trouble again in the 4th. He hit Donaldson with a pitch leading off the inning, Kottaras moving him to 2nd with a single. Downs then did the wrong thing.

He got a double play ball.

Tigers misfired on the 5-4-3 double play, Cliff Pennington beating Infate's relay. With 1 out and runners on the corners, what did Downs do? He handled the next double play ball.

The lesson learned? If you want something done right, do it yourself.

Downs would pitch into the 5th inning, replaced by Brayan Villarreal after setting down the first 2 A's of the inning. Villarreal immediately found himself in trouble. He would walk Cespedes, followed by a double to Moss. With runners in scoring position, Villarreal whistled past the graveyard when Drew flew out to Jackson. The Tigers would hold on to their 3-1 lead.

The lead was extended to 5-1 when the highly paid big men did their thing with wooden clubs. Cabrera lined a stand-up double into the power alley in right center. Cabrera was able to jog home when Prince Fielder jacked a 1-2 pitch which would narrowly clear the wall in right for his 27th home run of the season.

The game having been forced upon the Tigers' bullpen, Leyland was using everyone at his disposal. Villarreal was pulled after 1 out in the 6th, Phil Coke taking over. Coke would easily finish the first 1-2-3 inning for the evening for the Tigers.

Struggling to keep the Tigers within haling distance, the A's lost the signal in the 6th. Peralta led off by drawing a walk off new A's pitcher Evan Scribner. Infante hit a hard ground ball to Carter 1st, setting up the 3-6-3 double play. Didn't happen.

A team other than the Tigers botched a double play!

Carter went to 2nd for the force. But Drew's return throw was wild. Infante, getting the benefit an error instead of committing one, advanced to 2nd. Gerald Laird reached base for the 3rd straight at bat by walking. Jackson would make the A's pay for their mistake,doubling into the left field corner, scoring Infante. Berry made the game a true blow out, yanking a 2 RBI double to right, giving the Tigers an 8-1 lead.

As good as things were going on the scoreboard for the Tigers, the trainers were getting a workout. Berry had to leave the game with what appeared to be an injured shoulder in the 7th. With 2 down Reddick hit a Texas leaguer into short left. Trying to make a diving catch, Berry didn't come up with the ball...but did come up wincing in pain, holding his right shoulder. Unable to continue, Berry was forced to leave the game. Andy Dirks moved from right to left, Avisail García entering the game as the right fielder.

Reddick ended up on 2nd, credited with a 2 base hit. Cespedes' RBI single to to left made it an 8-2 game.

The Tigers bullpen continued their dominance in the 8th, Joaquin Benoit pitching a scoreless inning.

The Tigers loaded the bases on singles by Laird, Jackson and Garcia. Cabrera would send the Comerica Park crowd into hysterics, depositing a Jesse Chavez fastball into the left field seats, the grand slam his 40th home run of the season. The chants of "MVP-MVP -MVP" rang throughout Detroit.

Making his first appearance for the Tigers since July 14th, Luis Marte set down the A's in order.

The Tigers did what they needed to do. Win.

Unfortunately, the Tigers still need lots of help to make the post season. They didn't get it from the Royals tonight, who fell to the White Sox 3-2.

The MRI on Max Scherzer's fatigued pitching shoulder showed no structural damage. He will not throw for a few days and be re-evaluated.

Quintin Berry was diagnosed with a right shoulder contusion. X-rays were negative.

Alex Avila does not have a concussion, and is listed as day-to-day. Leyland said in the post game Avila would be cleared to play "Whenever the headaches go away."

Bullets are brought you by Ace Hardware's Rod Allen and his 1984 championship ring. 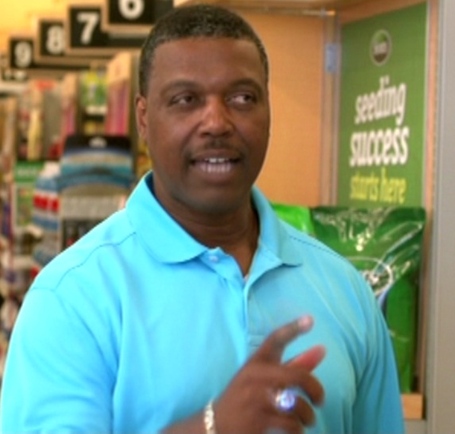 While meeting with the media before tonight's game, Jim Leyland was asked about his future with the Tigers. His reply?

Leyland may not like it, but his uncertain status as the Tigers' skipper remains a story. As we've said on the BYB Podcast, we don't believe Leyland will be fired. But there is suspicion he may call it a career at the end of season.

The A's Coco Crisp is highly contagious, suffering from pink eye. He was quarantined to "Coco's Corner" of the dugout. 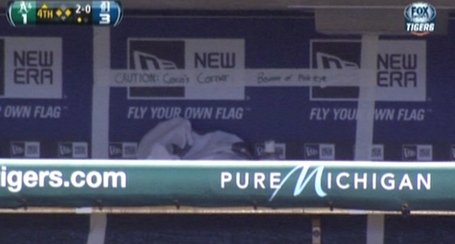 Do not do this, people! These fans interfered on Yoenis Cespedes' single in the 7th. 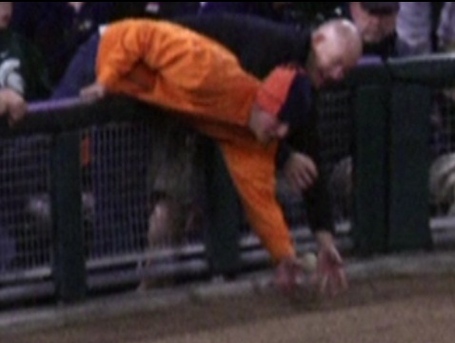 Cabrera ole'd Josh Donaldson's ground ball in the 8th, coming up with the tough in-between hop. 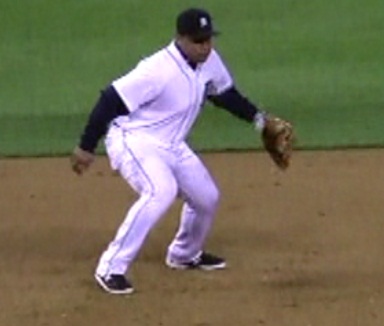 Jesse Chavez plunked Prince Fielder after Cabrera went yard in the 8th. Chazez was immediately tossed by home plate umpire Jerry Meals. Going by his huge smile in the background, Fielder looks none the worse for wear. 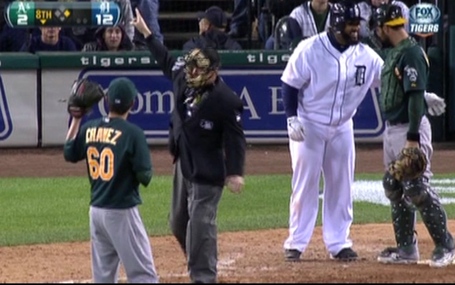 Austin Jackson: Triggered the offense with 3 hits and 3 ruins scored

Miguel Cabrera: The best hitter in baseball, bar none. Yes, even better than Wonderboy.

Darin Downs: Unexpectedly stepping in for an injured Scherzer, Downs held the A's scoreless in 2 2/3 innings.

Gerald Laird: 3 singles, a walk and a run scored, reaching base on all 4 at bats. G$ was $ tonight.

In a game filled with doom and gloom, Delmon Young did he best to lift the Tigers, pacing the offense with 2 hits and 3 RBI. He was rewarded, though not with a victory., but as BYB PotG with 88% of the vote.