In front of a national TV audience, the Detroit Tigers beat the Chicago White Sox 4-2, sweeping their divisional showdown. Justin Verlander allowed just 1 run in 8 innings, getting credit for the victory. Jose Valverde pitched the 9th for his 28th save. Chris Sale lasted 6 innings for the White Sox, giving up 5 hits, walking 4, charged with all 4 Tigers runs, taking the loss.

Brennan Boesch and Delmon Young both hit home runs, supplying all the offense the Tigers would need. Alejandro De Aza homered for the White Sox, Dan Johnson chipping in with an RBI single.

With each team's ace on the mound, a pitcher's duel was what we expected. That's just what we got...for 5 innings.

Verlander was coming off one of the worst performances of his career in his last start against the Royals. De Aza was coming off the DL, leading off. Verlander's 2nd pitch of the game was a fastball which De Aza deposited over the wall in right field, the White Sox taking a quick, surprising and somewhat deflating 1-0 lead.

Annoyingly pesky Dewayne Wise, batting 3rd (really?), dropped a bloop off the end of his bat in short left for a fluke double with 1 out. But Verlander bore down, striking out the side to get out of the 1st with a minimum of damage.

The Tigers' first hit was a 2 out double off the bat of Jhonny Peralta in the 2nd. Avisail Garcia followed by ripping a line shot...but it was straight at a perfectly positioned Alex Rios in right. So the Tigers threaten, but do not score.

The White Sox put runners on 1st and 2nd with 1 out in the 3rd. Orlando Hudson looped a lead off single to right, but was eliminated when De Aza hit into a fielder's choice. Verlander's fastball missed inside, missing Youkilis' body armor as well, hitting him in the back elbow. But Verlander was able to get out of trouble, striking out Wise, Paul Kornerko grounding out. So the White Sox threaten, but do not score. But the Sox still led, 1-0.

While Verlander was settling in after the quick strike home run, Sale was pitching like a Cy Young candidate. Wait, what? Oh yeah, Sale is a Cy Young candidate! As if to prove it, the Tigers grounded into double plays to end the 1st and 3rd innings.

As good as Sale was, he Tigers were getting on base...via the free pass. In the 4th, Cabrera walked with 1 out, moving to 2nd when Sale drilled Prince Fielder in the back. But for the 2nd time in the game, Young went fishing for sliders out of the zone, striking out. The threat ended when Peralta grounded out on a checked swing.

The Tigers finally got to Sale in the 5th. Brennan Boesch bashed a long home run into the shrubs in dead center (That's big boy, Cabrera and Fielder territory), his 12th knock of the season knotting the game at 1-1. Gerald Laird almost gave the Tigers the lead, his fly ball to deep left falling a foot short of the bullpen and into Wise's glove.

At this point, after 6 innings, Verlander was on cruise control. He was 95 pitches in, having allowed only 3 hits since De Aza went yard, racking up 8 K in the process.

Infante led off the bottom of the 6th inning with a single. Sale, pitching very, very carefully, walked Cabrera for the 2nd straight at bat. Butt once again, a Tigers batter struck out on a down and away slider, Fielder was the victim this time, the 1st out of the inning.

Young, who had been victimized by Sales' slider in his earlier at bats, fell behind in the count 1-2. Of course, knowing Young will swing at any and all pitches, Sale threw another breaking ball out of the zone. But this time Young connected, smoking a 3 iron off his shoe tops and straight into the bullpen. The 3 run home run, his 17th of the season, gave the Tigers a 4-1 lead, breaking up the pitcher's duel.

Sale was done after 6 innings and the home runs from Boesch and Young. After 6 innings, Verlander was just getting warmed up. Warming up? Hell, he was in beast mode.

When it comes to wild pitches, we saw a doozy in the 7th. With the slow of foot catcher Tyler Flowers on 1st after a 2 out walk (which looked for all the world like it should have been a strike out), Verlander uncorked a pitch into the dirt in front of Laird...and by the time G$ realized where the ball had landed, Flowers was sliding into 3rd base. Verlander shrugged it off like had been White Sox batters all night long and ended the inning without incident.

Verlander didn't get Jim Leyland's "Handshake of doom" after the 7th. Good thing, as Verlander was unhittable in the 8th, setting down the White Sox 1-2-3. With a sellout Comerica Park crown on their feet, Verlander finished his night by striking out Wise on his 124th pitch, posting his 11th K.

Having pitched in the first 2 games of the series, saving 1, Leyland once again went with Jose Valverde. As is his wont, the Big Potato made us sweat, at least a little.

After 2 quick outs, and the crowd booing A.J. Pierzynski fiercely, he singled. No worries. Alexei Ramirez singled over a leaping Cabrera. Still no worries. With the tying run at the plate, Dan Johnson pinch hit, who also singled, making it a 4-2 game. OK, now I was getting a little worried.

Hudson came to the plate with an opportunity to make things really interesting, and almost did. He ripped a liner to center, but it wasn't hit hard or far enough to get past Jackson, who flagged the ball down for the final out.

Tigers back in 1st place!

This was one of the weirder plays of the season. Jackson hits a nubber down the line, Konerko is going to let the ball either roll foul or grab it and touch the bag. Easy out to end the 5th inning, right? 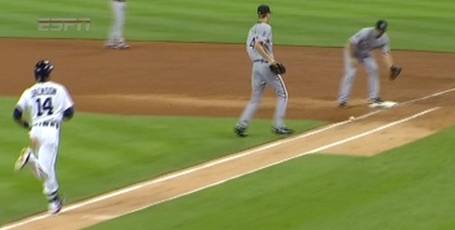 Wrong! The grounder hugs the baseline, bouncing off the bag before Konerko can grab it. 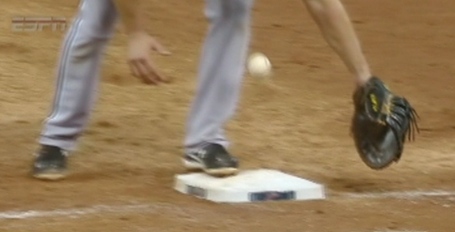 This is the moment when Konerko realizes he'll be on Sportscenter's blooper reel for the rest of the month. 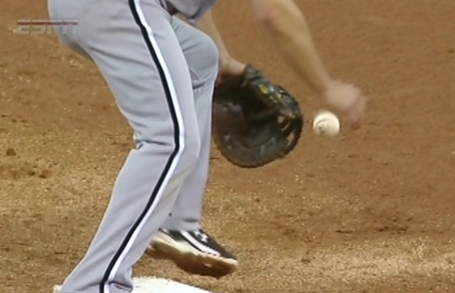 Jackson is safe, while Konerko is victimized by the Baseball Gods. 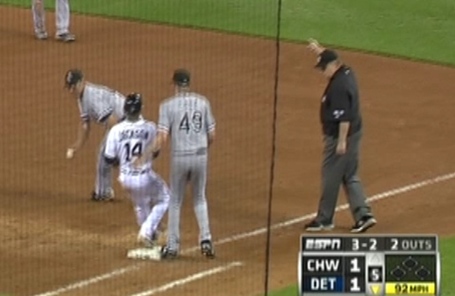 Unfortunately Jackson would be picked off, making the whole thing moot. Regardless, this was awesome sauce for Tigers fans!

Justin Verlander: Did what an ace is supposed to do. We've come to expect nothing less.

Brennan Boesch: Was the first Tiger. to get to Sale, taking him deep in the 5th. Over the weekend Boesch was 3-10 with a triple, home run and 3 walks. His bat his waking up at a very opportune time.

Delmon Young: He has a novel approach at the plate - Young sees ball, Young swings at ball, Young hopefully hits ball. Right now, it's working and the Tigers are reaping the benefits.

Avisail Garcia: Mini-Miggy continues to impress with a 2-4 night.

Not tonight! Sweeping the White Sox was a team effort.

Max Scherzer tossed 8 shutout inning in one of the better pitched games you'll see all season, making him a runaway winner with 92% of the BYB vote.