The Tigers' defense and bullpen were lacking considerably in today's loss to the Minnesota Twins.

The Minnesota Twins rode a 5 run 6th inning to a 10-4 victory in the first game of a day-night doubleheader against the Detroit Tigers. The Tigers are now 1 game back of the 1st place White Sox in the AL Central.

Scott Diamond went 7 solid innings for the Twins, allowing just 2 run is winning his 12th game of the season. Max Scherzer left his last start after 2nd inning due to a shoulder issue, gave up 3 runs in 5 innings, falling for the 7th time in 2012.

Joe Mauer led the Twins with 3 hits and 4 RBI, Ben Revere joining the hit parade with 2 hits. Avisail Garcia paced the Tigers with a pair of singles and 2 RBI. Miguel Cabrera added an RBI double, holding his lead in the Triple Crown categories.

Declared healthy after a fatigued shoulder scare, Scherzer looked as if there were still issues with his arm in the opening inning. He allowed back-to-back singles to Revere and Mr. Hair, Mauer. Josh Willingham nearly gave the Twins a 3-0 lead, yanking a low 90's Scherzer fastball just foul. The near home run apparently woke Scherzer up, as he struck out Willingham and retired Justin Morneau on a fly to center.

Scherzer looked like his normal, dominant self after the Twins' 1st inning threat, setting down 10 in a row and 11 of 12 after Mauer's single.

Diamond was even more impressive than Scherzer. He set the Tigers down in order on 28 pitches, not coming close to allowing a base runner, let alone a base hit, through 3 innings.

Infante broke up Daimond's prefect game with 1 down in the 4th, lining a single to left. WHEW.

The shutout ended one batter later, thanks to the sabermatrician's nightmare, Miguel Cabrera. The Triple Crown threat extended his MLB RBI lead by ripping a double to left, Infante scoring as Willingham let the ball bounce around in the corner. 1 out later, Delmon Young, the Tigers fan's nightmare, followed with a single to right. Gene Lamont, knowing Revere throws worse than my little sister, sent Cabrera. The throw was far off line, Cabrera touching the late ahead of a diving Mauer, to give the Tigers a crooked number lead at 2-0.

The Twins threatened but did not score in the 5th, Eduardo Escobar singling and stealing 2nd. But Scherzer struck out Span to end the minor threat.

The Twins finally got to Scherzer in the 6th, opening the inning with 3 consecutive hits. Revere hit a fly to deep left, Dirks got his glove on the ball, but couldn't haul it in. As the ball fell to the turf, Dirks crashed into the fence. By the time Dirks corralled the ball, Revere has a stand-up triple.

The Twinkies then got a bit lucky. Mauer was fooled, but his swinging bunt toward Infate ended up an RBI single. Infante's bare hand throw was in the dirt, Prince Fielder unable to dig it out. Willingham ended Scherzer's afternoon by lashing a double down the left field line.

Dirk's rough inning continued, costing the Tigers 2 runs. Phil Coke took over, Morneau hitting a bloop to left. But Dirks, playing so far back he was closer to Oakland County than home plate, took a step back on Morneau's big swing. The flair would drop just in front of Dirks for a 2 RBI single, tying the game at 2-2.

Coke walked Ryan Doumit, loading them bases. Jim Leyland called on Brayan Villarreal to save the Tigers' bacon. He would help fry them instead.

Trevor Plouffe would rudely greet Villarreal, lacing his first pitch into left for an RBI single, keeping the bases loaded. Then Villarreal had a mental meltdown...or he just didn't know the rules of baseball.

Bases loaded, 1 out, the light hitting Escobar at the plate. Villarreal struck him out on a pitch in the dirt. But the ball skipped past Gerald Laird, Morneau taking off for home. Laird, hustling to run the ball down, threw to Villarreal in plenty of time to nail Morneau, 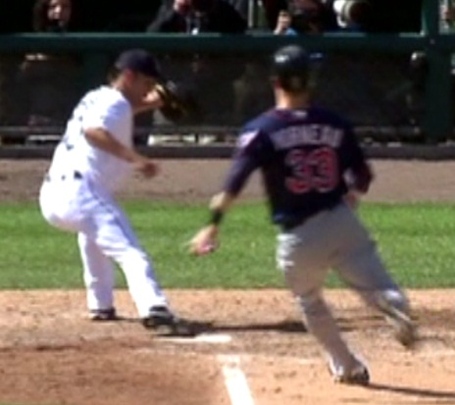 But Villarreal, not realizing he needed to tag Morneau, played it like a force at home, just tagging the plate. 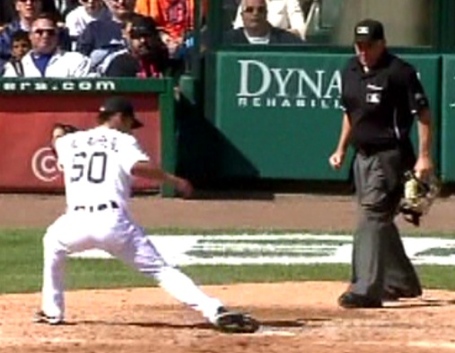 Instead of a strange inning ending double play, Morneau was safe, the bases remained loaded and the Tiger's reputation as the most un-fundamentally sound team in baseball remained secure.

The Twins would tack on their 5th run of the inning on a ground ball off the bat of Florimon. By the time a miserable inning ended, 8 Twins had come to plate against 3 Tigers pitchers, scoring 5 runs on 5 hits. The Tigers were not charged with any errors, but the scorer doesn't track those of the mental variety.

The Twins would extend their lead to 6-2, manufacturing a run. Revere singled, stole 2nd, took 3rd as Laird's throw bounced into center for an error and score on Mauer's sacrifice fly.

While the Tigers were busy making Sportscenter blooper reels on defense, Daimond was making the Tigers offense look like...well, anything but a playoff worth one The Tigers were unable to advance a runner past 1st base after 4th.

The Twins kept pounding Tigers' pitching in the 8th, Darin Downs this victim as the lead was stretched to 10-2. The big hits of the inning were RBI singles by Escobar and Revere, and a monster 2 RBI triple off the bat of Mauer.

Gerald Laird ended the game in fitting fashion, striking out.

Tigers lose, fall to 1 full game behind the White Sox. Good thing there's only a few hours before they play the nightcap, so we can quickly forget what was a miserable game.

Bullets that aren't in the Tigers' feet are brought to you by a nightclubbing goateed baby. 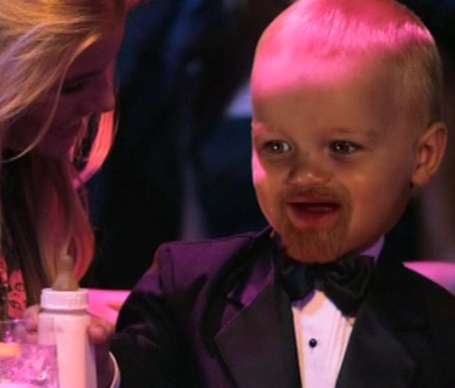 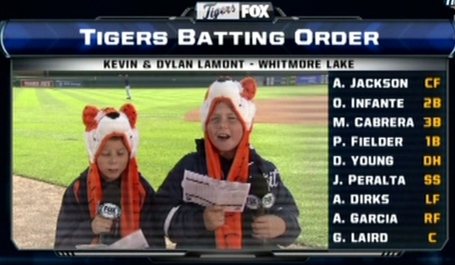 LOL WUT? Paws all the way! 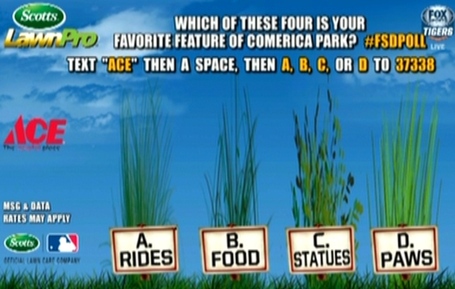 Luke Putkonen: The only Tigers arm to not allow a run.

Max Scherzer: Considering he was coming off the fatigued shoulder diagnosis, 5 innings and 3 runs was more than acceptable.