The Minnesota Twins swept their double header with the Detroit Tigers, taking the nightcap 2-1 in 10 innings.

The Minnesota Twins swept their double header with the Detroit Tigers, taking the nightcap 2-1 in 10 innings.

Jamey Carroll's RBI single brought home Denard Span with the winning run for the Twins. Tigers' closer Jose Valverde took the loss in relief. Jared Burton pitched a scoreless 8th and 9th to earn the victory, Glen Perkins picked up his 14th save.

Miguel Cabrera's 1st inning double drove in the Tigers' only run. Cabrera retained his lead the AL Triple Crown categories, ending the day with a .331 average, 42 home runs and 133 RBI.

In the 1st inning, the Twins' Carroll found himself on 3rd base the old fashioned way. Via small ball. He singled off Smyly, stole 2nd and advanced to 3rd on a ground out. Smyly pitched around Josh Willingham in order to face the lefty swing Justin Morneau.

Morneau sliced a liner to left. Off the bat, it looked to be an extra base RBI hit. But Quintin Berry laid out to make a spectacular diving catch, saving 2 runs and ending the inning.

The Tigers were able to capitalize on their opportunity in the bottom of the inning. They would take a 1-0 lead due to the talents of one Miguel Cabrera. Austin Jackson singled, then scored without a throw when Cabrera (on a long, 8 pitch at bat) rattled a double off the scoreboard in right center.

The game settled into a rhythm after Cabrera's RBI -- a hitless rhythm. Both Smyly and Walters not allowing a hit in the 2nd and 3rd innings. We didn't see another base hit until Morneau singled after 2 were down in the 4th. Smyly would leave him stranded, Ryan Doumit flying out.

Considering Walters entered the game with a 6.20 ERA, you would expect the offense to wake up sooner than later. Well...it didn't. Fielder singled in the 4th, the first Tigers' hit since Cabrera doubled. He was quickly eliminated on Boesch's double play that wasn't (in other words, the 1st base ump missed the call). Jhonny Peralta, in the mother of all slumps, struck out. Inning over.

But a pitcher's worst enemies, walks and bad defense, got Smyly in deep, deep trouble while facing the bottom of the Twins' order...which made it even worse. Trevor Plouffe walked, Matt Carson grounded a single up the middle, past a diving Peralta. As is the Twins way, Pedro Florimon laid down a sacrifice bunt. But Smyly's throw pulled Ramon Santiago off 1st base, everyone safe.

Revere hit a 2 hopper to Fielder, who threw home for the force...which really was a force. This likely being Smyly's last inning anyway, Jim Leyland already had Al Alburquerque warning up. Leyland pulled Smyly, Alburquerque coming on to clean up the mess.

He almost got out of it scott-free. Almost.

Carroll hit a sharp ground ball to Cabrera. He went home for the force, Avila firing to 1st trying for the double play. But a sliding Carson clipped Avila as he was throwing, sending the ball wild high and into right field. Boesch stopped the ball from going into the corner, but Florimon would score on the error. Luckily for the Tigers, Revere was caught straying off 3rd, Alburquerque cutting off Boesch's throw and firing to Cabrera for the 3rd out. After the dust settled and the baseballs stopped flying around Comerica, the Twins had tied the game at 1-1.

Considering the Twins had loaded the bases with no one out, the Tigers were fortunate to allow only 1 run. Then again, if the Tigers made good throws, it could have been a scoreless half inning.

The Tigers followed up the Twins run by....well they didn't. Walters set the Tigers down in order in the 5th.

The Twinkies threatened in the 6th, Willingham and Morneau hitting consecutive 1 out singles. But Alburquerque, looking more and more like his mid-2011, throwing a bad-ass slider self, struck out Doumit and Plouffe...swinging, of course.

As we went into the 6th, Rod Allen was getting impatient, saying it was about time the Tigers figured out Walters, who had "been putting up lots of crooked numbers." The Tigers must have been listening, Berry led off with a single. After Cabrera popped out, Fielder lined a single to center. A threat! but not for long. Delmon Young did what he does so well, hit into rally killing double plays, this one a tailor made 6-4-3.

Alburquerque was cruising along in the 7th. But after 2 were down, Fielder kept the inning alive by committing the Tigers 3rd error, muffing Revere's grounder. Alburquerque was able to pitch through both the error and the 1st base ump incorrectly calling a ground ball out to Fielder "foul," getting Carroll on a fly to Jackson.

Ron Gardenhire pulled Walters in the 7th, replacing him with Brian Duensing. Jim Leyland countered by pinch hitting Avisail Garcia for Boesch. Garcia took Duensing back up the middle for a lead off single.

Garica being the fastest runner on the Tigers, think he would be running with the slumping Peralta at the plate? Not with a left hander on the mound. There would be no small ball, either. Peralta stuck out, and Avila would ground into an easy 6-3 double play on a soft one hopper, Florimon perfectly positioned to make the play. Inning over.

Following hie bullpen bible, Leyland went with Joaquin Benoit in the 8th. He handed the Twins with ease, pitching a 1-2-3 inning. As did Duensing, the Tigers going quietly in order in the bottom of the 8th.

9th inning, 1-1 game, the Tigers 1 run and 3 outs away from 1st place. I suggest you wear a helmet, it might get a little rough.

Thanks to a couple days rest and a low leverage 8th, Leyland felt comfortable using Benoit for a 2nd inning. Good thing, as he set the Twins down in order, including a pair of strike outs.

Cabrera led off the 9th against new Twins reliever Jared Burton, chants of MVP-MVP-MVP" filling Comerica. But no walk offs from Cabrera, sending a can of corn to right. Fielder struck out. Young hit a foul pop to Morneau, which he would play like Fielder, and drop. But Young couldn't take advantage, grounding to short, sending the game into extras.

The Tigers' official Twitter called it bonus baseball. I just call it unnecessary torture, considering the comedy of errors in that was the top of the 5th. But on to the 10th we continued/

It was Big Potato time, in an ever frightening non-save situation. to start extras. Of course, Span lead off against Jose Valverde with a seeing eye single through the right side. Valvede looked to have Revere struck out, but didn't get the call. Instead, with Span on the go, Revere would ground to Cabrera, the runner advancing to scoring position.

Even with the outfielders playing in, Carroll's looping liner to center scored Span easily. Carroll gave the Tigers a break, running into an out at 2nd. But the damage was done, the Twins taking a 2-1 lead into the bottom of the 10th. Valverde left the field to a chorus of boos.

Leading off the 10th against Twins closer Glen Perkins, Garcia swing at the first pitch, pulling a Boesch -- grounding to 2nd base. 1 out.

Peralta struck out for the 2nd time. 2 out.

Gerald Laird, pinch hitting for Avila, flied out to right to end an absolutely miserable day in Detroit sports.

Why? The defense was ridiculously bad while the offense was ineffectual at best, futile at worst. I'm not going to blame Valverde. One, Potato didn't give up a hard hit ball. Two, the Tigers should never have been shut down by P.J. freaking Walters in the first place.Three, DEFENSE IS PART OF THE GAME. Too bad Dave Dombrowski forgot.

In the end, frustrating the losses today may have been, the Tigers are only 1 game out of 1st. I remember back to 1987 and game 152 of that season. The Tigers lost, falling 1 1/2 games out of 1st. They would go on to lose 3 games in a row to the 1st place Blue Jays, falling 3 1/2 back of the in the East. In game 4 of the series, it took Kirk Gibson hitting a 9th inning home run and 13th inning RBI single to avoid a series sweep.

Now that was really a miserable weekend.

I realize the situation is different in 2012, but I just wanted to remind you things looked completely hopeless in '87, yet the Tigers came back to win the division. It can be done. All is far from lost. 1 game back with 10 to go is far from insurmountable, even if it feels like it after today's sweep.

Trust me, the White Sox and their fans aren't feeling any better than the Tigers and we Detroit fans. I do suggest staying as far away from sports talk radio as possible, if you want to keep your sanity.

Bullets are brought to you by someone who has seen the Tigers play defense. What has been seen, cannot be unseen. 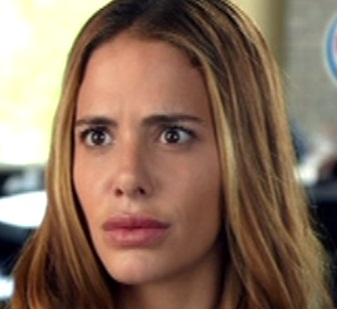 Cabrera stated the 2nd game of the twin bill at 332/42/132, leading the AL in the Triple Crown categories. 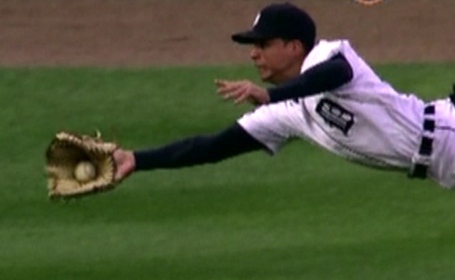 I hit it off that big ass scoreboard. What? THE ONE I'M POINTING AT! 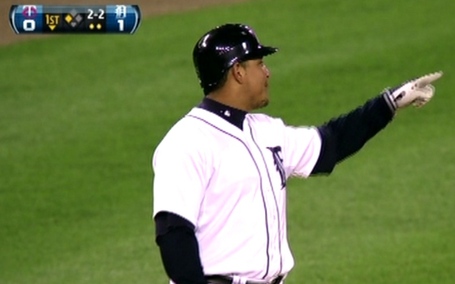 God dammit, Prince. But as a former 1st baseman, I can commiserate. This has happened to me. The pop fly directly over your head is toughest play for a 1st baseman to make, by far. 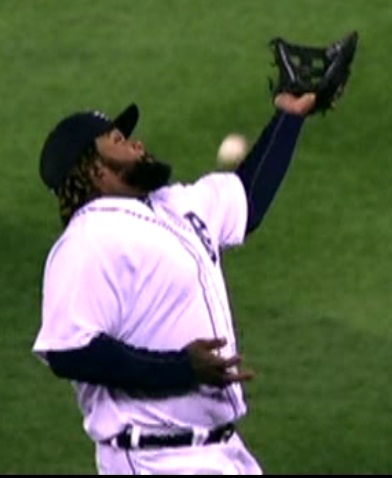 Al Alburquerque: 2 2/3 innings of scoreless relief. He's pitching like his old self, Mr. Snappy and all.

Miguel Cabrera: Drove in the only run of the game.

Defense: 3 errors in the nightcap, 4 errors on the day and several mental errors. An unearned run was the reason the game went into extra innings. '

Dave Dombrowski: He should be embarrassed to have built such a brutally bad defensive team.

By pacing the Tigers' offense with a pair of singles and 2 RBI, Avisail Garcia was voted BYB PotG for the first time. Let's hope this is just the first of many for Mini-Miggy.