Behind Justin Verlander, Prince Fielder and a few other performances, the Tigers beat the Royals, 6-2. However, Chicago rallied late against Cleveland, so the Tigers remain a game out.

Starting the night one game behind the Chicago White Sox, the Detroit Tigers kept pace in the AL Central by beating the Kansas City Royals 6-2. As both teams vying for the division crown won, there's no change in the standings. The White Sox hold a one-game lead over the Tigers with nine left to play.

Miguel Cabrera was 1-4, his Triple Crown hopes still very alive. He leads the AL in batting average and RBI, but fell to 2nd in the home run race.

After a 1-2-3 opening inning for Verlander (not holding back on his fastball, throwing in the mid-90s), Austin Jackson lined Hochevar's first pitch into right field for a lead off single. He took a seat just as quickly. Quintin Berry blooped a dying quail to center. A charging Jarrod Dyson made a nice sliding catch, quickly leaped to his feet, firing to first baseman Eric Hosmer, doubling off Jackson by a good 10 feet.

Jackson was caught in no-man's land, but he didn't help matters by going 3/4 of the way to 2nd. Berry's dying quail made Jackson a dead duck once Dyson made the catch. The Tigers are the best in MLB when it comes to discovering new ways to hit into a double play, this time managing it with 2 of the fastest players on the roster.

Tiger Killer Billy Butler had the first Royals hit of the game, stinging a lead off single to left in the second. No no-no tonight. Verlander would set the next three non-Tiger Killer Royals down in order.

First pitch swinging, Prince Fielder would hit Hochevar's fastball far into the right field stands, a majestic solo shot giving the Tigers a 1-0 lead. It was Fielder's 28th big fly of the season.

Andy Dirks would single with one out. He was erased when Jhonny Peralta hit into a force on an admittedly nice play by Royals' SS Alcides Escobar. But the Royals couldn't make a nice defensive play on Alex Avila. Why? Because he drilled an RBI double off the scoreboard in right center, giving the Tigers a 2-0 advantage.

While the Tigers' bats were shut down by the immortal Hochevar in the next twi innings, the Royals showed they were embracing the part of spoiler.

The Royals threatened against Verlander after two were down in the third. Dyson singled and stole second. Verlander shut down the uprising by striking out Escovar with high cheese.

Unfortunately, Verlander couldn't keep the ever pesky Royals off the scoreboard. Leading off the 4th, Alex Gordon lifted a Verlander fastball into the breeze blowing out to left, landing in the bullpen. Gordon's 12th home run of the season closed the Tigers' lead to 2-1.

The Royals continued to torture Tigers fans in the 5th, putting another runner in scoring position. Jeff Francoeur's ground ball back up the middle was off the glove of a diving Peralta. With one down, Johnny Giavotella singled to right, Francoeur taking 3rd.

Then came the stuff of nightmares. Verlander appeared to injure his non-throwing shoulder on the freakiest of plays.

Avila's throw to Verlander hits the hand of the home plate ump. 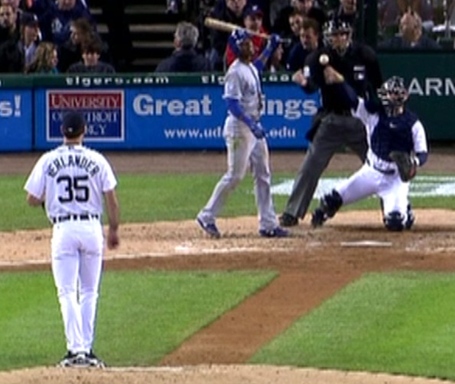 To keep Frenchy from advancing, Verlander has to dive to grab the errant throw.

Verlander comes up holding his left shoulder. EVERYBODY PANIC!!! 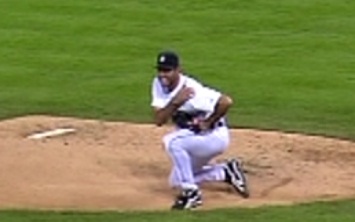 Tigers' head trainer Kevin Rand was out to the mound faster than Avisail Garcia is from first to third. Verlander threw a few warm up tossed and declared himself fit to pitch. Ever the bad ass, Verlander shook off the jammed shoulder and struck out Dyson and Escobar to get out of trouble.

With everybody 's hearts having restarted after the Verlander injury scare, the Tigers' bats also perks up up after a two-inning snooze.

After Peralta ran into an out, Avila walked. Omar Infante followed with a single, setting the plate for Jackson.

Jackson would slap a high-hopper down the right field line, Avila crossing the plate. Tying to peg Jackson, Francoeur's throw short hopped Giavotella at second, skipping into short left, allowing Infante to score. Trying to take the extra base, Jackson was thrown out at third. Once the Royals had stopped flinging the ball all over the planet, two runs had scored, the bases were empty and the Tigers had a 4-1 lead. Jackson was credited with an RBI double, Infate scoring on Francoeur's throwing error.

Yet the Royals weren't going down without annoying the Hell out of Verlander and the Tigers' fan base. After Gordon grounded out to open the 6th, Tiger Killer Billy Butler singled past Peralta. Salvador Perez broke his bat, yet sent a soft liner to center for a single, Tiger Killer Billy Butler moving to second. As if to say this crap stops now, Verlander struck out Mike Moustakas and got Francoeur on a can of corn to left.

Miguel Cabrera ended his two at-bat slump with a sixth inning lead off single. Delmon Young's looping single to right advanced Cabrera to third. With the Tigers' MVP candidate in scoring position, Andy Dirks did his job by lifting a sacrifice fly to deep center. Cabrera jogged home, making it a 5-1 game.

At 103 pitches to start the 8th, Verlander took the mound as Joaquin Benoit was warming up. But Escobar and Tiger Killer Billy Butler threw a monkey wrench into the Tigers' plans with a lead off double and a ground ball RBI single, making it a 5-2 game. Once again, Verlander decided he had seen enough of this crap, ending the inning by inducing Perez to ground into a 6-4-3 double play.

The Tigers finally knocked Hochevar out of the game in the eighth, Fielder and Young doing the job with back-to-back 1 out singles. Nate Adcock came out of the pen to pitch to Dirks. The Neck would neck a single over short, Fielder rumbling home with the Tigers' sixth run of the evening.

Verlander received the "Handshake of Doom" after the eighth. Being a non-save opportunity in the 9th, of course that meant it was Big Potato time.

Jose Valverde entered with a 4 run lead to face the Royals' 6-7-8 hitters.

Moustakas flew out to center. One out. 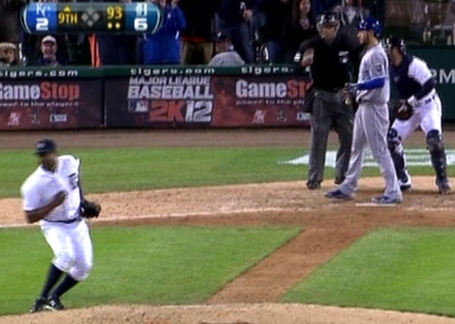 The Tigers move to within 1/2 game stay within one game of the White Sox, Verlander victorious in a must win game.

Then again, they're all must win at this point, aren't they?

Bullets are brought to you by a Luke Hochevar quick-pitch! 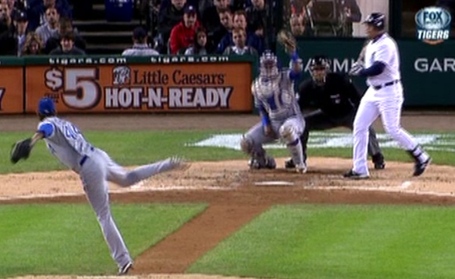 Cabrera goes into game 153 with a .331 batting average, 42 home runs and 133 RBI, leading the AL in the Triple Crown categories.

3rd inning: Fly out to short center, average remains at .330.

Cabrera holds the lead in average and RBI, but has fallen 1 back of Josh Hamilton in home runs. After missing the weekend, Hamilton returned to the Rangers' lineup, hitting home run number 43

Our good friend Rogo shuttered the wonderful Designate Robertson earlier in the season due to a family situation. He reported today via Twitter things are improving on the home front and is contemplating a return to writing next season. He is accepting suggestions to a name a possible new blog. I've already suggested using "Dumbrowski" in the title if he wants to attract Mlive types.

Where is everybody? There's a playoff race, fer chrissakes! 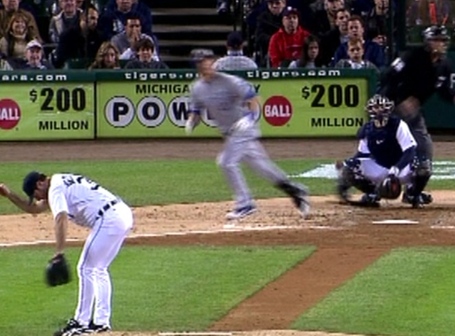 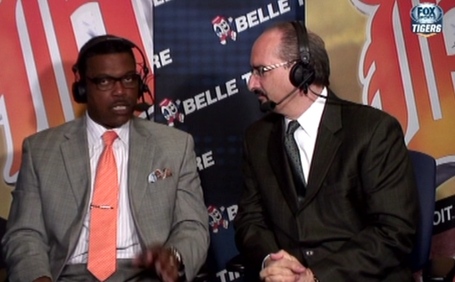 Justin Verlander: A day after the Tigers abused their bullpen in losing a double header, Verlander needed to do 2 things. Win and pitch deep into thw game. Done and done.

Austin Jackson: As Jackson goes, so goes the Tigers' offense. It's no coincidence the Tigers score 6 runs when Jackson has 3 hits.

Prince Fielder: 2 hits, one a huge home run to wake up the Tigers and a very quiet crowd.

Jhonny Peralta: Peralta drops lower and lower on Dave Dombrowski's short list of shortstops who could play for the Tigers in 2013.

Tiger Killer Billy Butler: It's unfathomable just how much he pwns Verlander.

Verlander injury scares: To be hurt on such a fluky, weird play would have been heart-breaking. Luckily, the Baseball Gods were just toying with our emotions.

Al Alburquerque pitched like it was 2011 and was rewarded with BYB PotG with 58% of the vote.