Anibal Sanchez pitched the Detroit Tigers into a 1st place tie with the Chicago White Sox by shutting out the Kansas City Royals, 2-0.

Anibal Sanchez pitched the Detroit Tigers into a 1st place tie with the Chicago White Sox in the Al Central by shutting out the Kansas City Royals 2-0.

Sanchez struck out 10 and allowed only 3 hits, winning for the 4th time as a Tiger. Royals starter Bruce Chen pitched well, holding the Tigers to 2 runs while scattering 10 hits, but suffered his 13th loss.

Prince Fielder and Delmon Young accounted for all the scoring, hitting back-to-back RBI singles in the 1st inning.

There would be no change in Miguel Cabrera's Triple Crown chase tonight. He holds onto his AL lead in batting average and RBI, and is 2nd in home runs, 1 back of Josh Hamilton.

Ready for a pitcher's duel? Better be. Sanchez has been pitching well and Chen is, well, he's Bruce "Cy" Chen, Tiger Killer incarnate.

Shockingly, Chen got into trouble early against a team he often dominates. But could the Tigers score against their nemesis?

The Tigers set the table for the Cabrera in the 1st inning, thanks to back-to-back singles from Austin Jackson and Omar Infante. Cabrera made a bid for a 3 run shot, but he didn't get quite all of Chen's pitch, the ball dying on the warning track. Fielder didn't go as deep as Cabrera, but he did find outfield green. The big man was jammed by Chen, but fought off the pitch, dropping a flair into right center. Jackson crossed the plate to make it 1-0 Tigers.

Young dug in with runners on the corners, but there would be no double play...this time. Wonder of wonders, Young took a controlled swing, going with the outside pitch, resulting in a soft line single to right, scoring Infante. Chen would stem the Tigers' tide at 2 runs, Andy Dirks striking out and Jhonny Peralta flying to deep left.

The Tigers continued their bid to kill Chen with a million paper cuts in the 2nd. Avisail Garcia and Gerald Laird gave the Tigers their 5th and 6th singles of the night, bringing up Jackson with no one out. The runners would advance when Royals' catcher Salvador Perez was unable to come up with Chen's pitch in the dirt.

The wild pitch became moot when Chen walked Jackson, loading the bases. But a crooked number...or any number...was not to be. Chen, always with an odd mastery over the Tigers, maddeningly got Infante on a pop up to center and stuck out Cabrera and Fielder with 88 MPH breaking balls.

Once again, opportunity wasted. It's the one story which has weaved consistently through of the Tigers' season.

Sanchez made the most of the early run support (less than it should of been) by hammering the strike zone, setting down the first 11 Royals in order. The hitless streak would end when Alex Gorden nubbed a cue shot through the left side hole after 2 were down in the 4th. Tiger Killer Billy Butler would make it consecutive singles, giving the Royals their first threat of the game.

But the drive was snuffed when a leaping, climbing the ladder, fully extended Cabrera sno-coned Perez's line shot, robbing him of extra bases and at least 1 RBI. The Tigers holding their 2-0 lead thanks to his grab, Cabrera jogged off the field with "MVP-MVP-MVP" chants rocking Comerica.

The Tigers may be unable to turn double plays, but they sure as Hell love to hit into them. Laird was doubled off on Jackson's line drive to 2nd, ending the 4th inning. Another day, another funky double play.

Meanwhile, Sanchez was, as your typical play-by-play guy loves to say,. dealing. It was more of the same in the 5th, Sanchez sending the Royals down in order for the 4th time in 5 innings.

Chen countered with a 1-2-3 5th, the Tigers failing to step on the neck of the Royals, allowing them to hang around only 2 runs down.

Then again, is anyone surprised?

Of course, the Royals would manufacture a threat in the 6th. With 2 out, Alcides Escobar laid down a bunt for a base hit, then easily stole 2nd as Laird's throw ended up in center field. Gordon would work a walk, setting 2 on, 2 out plate for Tiger Killer Billy Butler.

Sanchez obviously doesn't believe in Tiger Killers. Why? Sanchez struck Butler out to end the threat, excitedly pounding his chest as he bounded off the mound.

While the Royals were trying to figure out Sanchez, but unable to do so, the Tigers were treating Chen how they always do. Like a freaking hall of famer. Cy Chen would hold the Tigers scoreless in the 6th.

The 7th was just more of the same for Sanchez. He set down the Royals in order, 2 strike outs raising his total to 8.

Chen was having no trouble, until he faced Infante after 2 were out in the 7th. The Tigers' 2nd baseman would drive a liner into the gap in left center for a stand up triple. With the bases open and Young looming behind the big bats, the Royals were NOT going to allow Cabrera or Fielder to beat them. Cabrera was intentionally walked, Chen gave Fielder the unintentional intentional base on balls.

That was the end of Chen.

Royals manager Ned Yost called for righty reliever Louis Coleman out of the pen to face Young. Young would strike out on 3 pitches. The 3rd pitch out of the zone and in the dirt.

So...yeah. The Tigers would leave the bases full for the second time. Feel free to to commence the pulling out of hair.

But Sanchez didn't mind the miniscule run support. In his eyes, 2 runs were plenty. He would once again set the Royals down in order in the 8th. For the final out of the inning, Sanchez would leap high to nab Jarrod Dyson's chopper, then fire a bullet to Fielder to nip the speedy outfielder.

Sanchez would leave the field to a stranding ovation from an impressed and appreciative Comerica crown. I'm sure many believed the 8th would be it for Sanchez. I know I did. The Big Potato was ready and willing, warming up in the bullpen.

The Tigers would do nothing against Coleman in their half of the 8th. So the only suspense left was if Sanchez would come out for the 9th, or would we see Jose Valverde?

Pitch count was not an issue, Sanchez starting the 9th at 95. Despite the meat of the Royals order, the 3, 4 and 5 hitters, coming to the plate, it was Sanchez's game to win or lose,

Escobar would go down on a can of corn to Garcia.

Tiger Killer Billy Butler? No dead Tigers tonight. He would ground out to Fielder for the final out.

On his 105th pitch, Anibal Sanchez throws a shutout, pitching the Tigers into a 1st place tie with the White Sox.

We have God honest pennant race! A 162 game season is now down to a best of 8.

Bullets are brought to you by a dancing Cabrera holding court in the dugout. 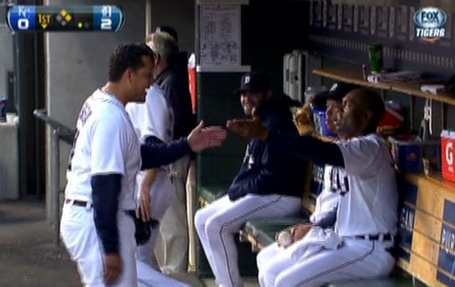 The Tigers' MVP candidate entered the night 1st in the AL with a .331 batting average and 133 RBI, and 1 back of AL home run leader Josh Hamilton with 42.

The Triple Crown is still in play.

God forbid there is a game 163 between the Tigers and White Sox. But if there is, and barring any changes in either rotation, the starters in the hoped not to happen game would be Justin Verlander and Chris Sale. The more you know.

Fire the ball as hard as you want I'll still catch it! Well, maybe... 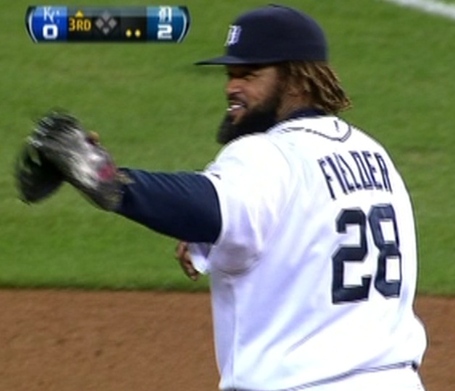 Who wants a SNO-CONE? 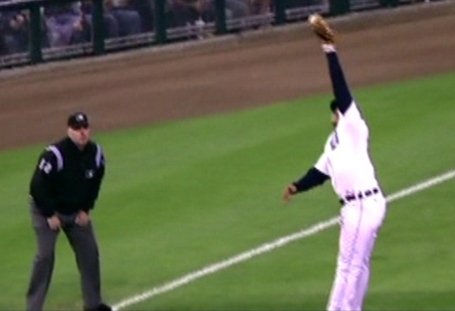 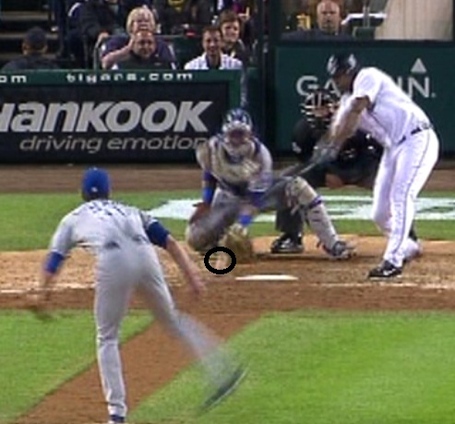 Who likes it when the crusty old manager shows his emotions? 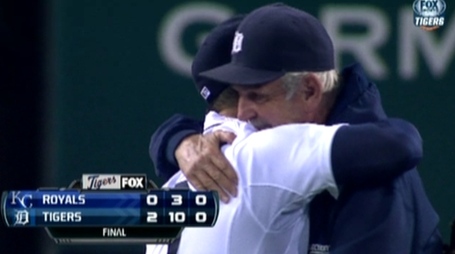 Anibal Sanchez: Came up huge in the biggest game of the season so far, pitching his best game as a Tiger.

Anibal Sanchez: Saved the bullpen when all hands need to be on deck in the final games of the season.

Prince Fielder: The other RBI!

The Cleveland Indians: Big win today to help the Tigers out.

Jhonny Peralta: Another hitless night at the plate.

The NFL replacement refs: Had to get that in there for Packers fan Kurt.

With the switch over to SBNation United, the PotG poll was lost in the shuffle. But those who did vote made Justin Verlander the winner. 1 single vote for Austin Jackson kept it from being unanimous.