Behind home runs from Austin Jackson and Alex Avila, and the base running of Andy Dirks, the Detroit Tigers came back from a 3 run deficit to beat the Kansas City Royals 5-4. The Tigers take a 1 game lead in the AL Central.

The Detroit Tigers roared back from a 3 run deficit to beat the Kansas City Royals 5-4, and take sole possession of 1st place in the AL Central. The Tigers hold a slim 1 game lead over the Chicago White Sox with 7 games left to play.

Joaquin Benoit, the 4th of 5 Tigers pitchers, tossed a scoreless 8th inning for his 4th victory. Jose Valverde closed out the Royals, nailing down his 32nd save. Kelvin Herrera took the loss in relief of Royals' starter Jeremy Guthrie.

Austin Jackson and Alex Avila went deep for the Tigers. Irving Falu had 3 hits for the Royals, Jeff Francoeur chipping in a solo home run.

In his chase for the Triple Crown, Miguel Cabrera went hitless in 4 at bats. Alex Gordon robbed Cabrera of what would have been his 43rd home run in the 5th, leaping above the left field fence.

With sinkerballer Rick Porcello on the mound, you knew the Tigers' infield defense would have to be at its best...which would be average for most teams. But the Tigers did flash glove leather in the top of the 1st.

Miguel Cabrera robbed Alcides Escobar, going into foul territory to nab his ground ball, then making an off-balance throw to nip the Royals' shortstop. Infante ended the inning by backhanding Alex Gordon's grounder behind 2nd base, and throwing him out on a bang-bang play.

If Porcello had defense like this behind him more often, he wouldn't be in midst of a 6 game losing streak.

Austin Jackson led off the bottom of the inning with a hustle double to left center. But for some unfathomable reason, Jackson froze and didn't advance on Quintin Berry's swinging bunt to Royals' pitcher Jeremy Guthrie. That would cost the Tigers a run when Cabrera ripped a hard grounder off the shin of Guthrie, which bounced directly to Escobar, who would throw the big man out. Prince Fielder followed with a chopper to short, ending the inning.

Another inning, another lead off double. This 2 bagger was off the bat of Delmon Young, smacking a liner to the wall in left center. There would be no squandering this time, thanks to Andy Dirks. Dirks would neck a ground ball past Guthrie and into center, the RBI single scoring Young.

Slumping Jhonny Peralta finally got a bit of good luck on a ball hit into the hole on the left side. Escobar made the backhand stop, but double clutched, allowing a hustling Peralta to beat the throw, Dirks taking 2nd. The runners would move station to station on Omar Infante's swinging bunt. But Guthrie would keep the damage to a minimum, pitching out of the jam on Jackson's 5-3 ground out.

There was lots of action after Dirk's single, yet nothing came of it. But the Tigers did have an early 1-0 lead, so the inning wasn't completely fruitless.

The lack of capitalizing on their early opportunities cost the Tigers. Not that Porcello was helping his cause either, giving the lead right back. The Royals quickly tied the game in the 3rd on back-to-back doubles from Irving Falu and David Lough. They would take a 2-1 lead when Gordon legged out a bloop double Jackson had trouble corralling. You can make it 3-1 on Tiger Killer Billy Butler's single.

Let me put the next run allowed by Porcello in context.

Royals right fielder Jeff Francoeur is considered one of the worst players in the big leagues. If you go by bWAR, he's even worse than Ryan Raburn. -2.7 to -2.0. Porcello made a bad night worse by serving up the .237 hitting Frenchy a meatball down the middle, which the consensus worst player in baseball drilled far over the wall in left for his 14th homer, giving the Royals a 4-1 lead.

The Tigers would get right back in the game thanks to the Chicago White Sox's favorite weapon, the big fly, the home run, if you will. After Peralta walked, Avila clubbed a Guthrie fastball over the scoreboard in deep right center, pulling the Tigers to within a run. The homer was the 9th of the season for Avila.

Make it back-to-back jacks..on. (Sorry, that was bad)

Jackson would knot the game at 4-4 with his 16th home run of the season, smashing a line shot which barely cleared the fence in left.

The game back to even, Jim Leyland had seen enough of what had been a very hittable Porcello, yanking him in favor of the immortal Luis Marte to start the 5th.

Uh...really? Luis Matre? Yes, that Luis Marte. Despite my reservations of using the journeyman in a pennant chase, Marte wasn't awful. He sandwiched a Gordon double around a pair of strikeouts, including one Tiger Killer Billy Butler.

Leyland then summoned Al Alburquerque from the bullpen to face Salvador Perez. Al-Al struck out Perez on a 2-2 breaking ball, inning over.

Cabrera led off the bottom of the inning lifting a high fly ball to deep left. You could practically count the seconds as Gordon took off for the wall, waited patiently for the moon shot to fall, leap and calmly rob Cabrera of a home run. He made it look easy (and admitted it was easy after the game)

After Fielder nearly took Gutherie's head off with a line shot, Escobar would rob Young of a bloop single with a sliding back to the infield catch.

The stellar glove work continued in the top of the 6th, Perlata throwing out Francoeur after a diving stop, helping Alburquerque to a 1-2-3 inning.

Guthrie was able to set the Tigers down in order in the bottom of the 6th thanks to Falu's diving grab of Avila's base hit bid.

Alburquerque blew through the Royals in the 7th, with an assist from the bench. Falu, who had singled with 1 out, was caught stealing when Leyland called for a pitch out.

Unfortunately, Guthrie was blowing through the Tigers' lineup as well. The 7th was over in the blink of an eye, Guthrie quickly setting the Tigers down in order, including Cabrera.

Alburquerque was pulled after 2 1/3 innings of 1 hit dominance, replaced by Joaquin Benoit to start the 8th. Perez singled with 2 out, but it was Mike Moustakas who put a scare into Tigers fans...twice. He narrowly missed a home run, yanking a Benoit pitch foul. The next pitch Berry would have to flag down on the warning track in left to keep the game tied at 4-4.

Guthrie retired 10 of 11 to end his 7 inning stint, replaced by fire-balling Kelvin Herrera in the bottom of the 8th. Fielder would greet Herrera by crushing a 2-2 fastball on the screws, but directly at a leaping Lough in center, who was playing Fielder at what appeared to be the 500 foot mark.

Young ripped a shot off the glove of 1st baseman Eric Hosmer. Falu nearly threw out the not so fleet of foot Young off the bounce, but Herrera couldn't handle the throw. Leyland would then call on the Wizard, Don Kelly, to pinch run. With Dirks are the plate, Kelly would steal 2nd, despite Herrera unleashing a 100 MPH fastball.

Given a chance to win the game, Dirks' opposite field liner would drop in short left. The crowd anticipated a play at the plate, but Gene Lamont smartly held Kelly at 3rd. Gordon, playing extremely shallow, would have had Kelly dead to rights.

The Tigers hadn't had a hit with runners in scoring position since Dirks' single in the 2nd. They wouldn't get another here, but Dirks' hard base running would give the Tigers the lead.

On a 2-1 fastball, Herrera shattered Peralta's bat, sending a slow ground ball to Moustakas at 3rd. He would fire to 2nd for the force, but Dirks, making like a running back, took out Falu with big time (and clean) take out slide, breaking up the double play as the Comerica Park cloud EXPLODED.

Jose Valverde took the mound to start the 9th and would face the bottom of the Royals' order - Frenchy, Hosmer and Falu.

Francoeur flied out to left. 1 down.

Falling behind 3-0 to Hosmer, Papa Grander would get the 4-3 ground out. 2 down.

The Triple Crown remains in play.

Alex Avila and his beard of titanium go yard. 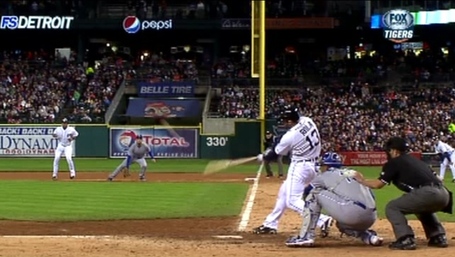 Austin Jackson's line drive barely, and I mean BARELY, cleared the fence. Talk about a game of inches... 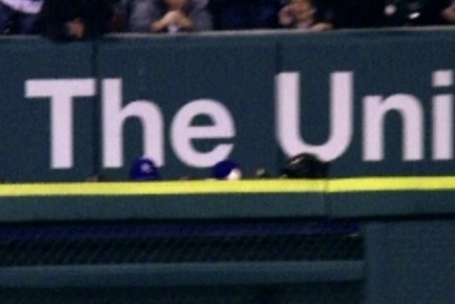 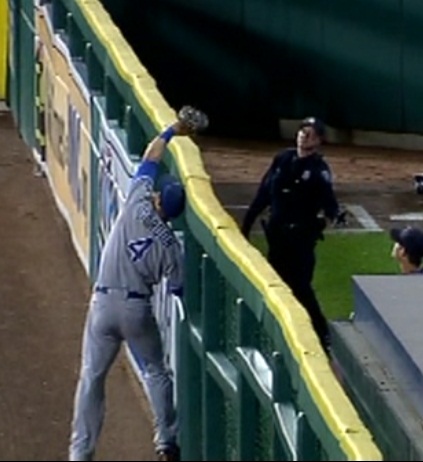 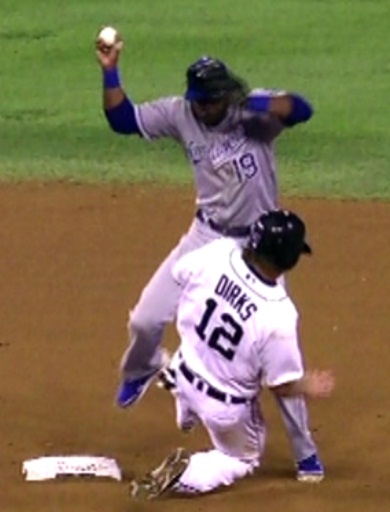 Andy Dirks looks quite pleased with the recent turn of events. 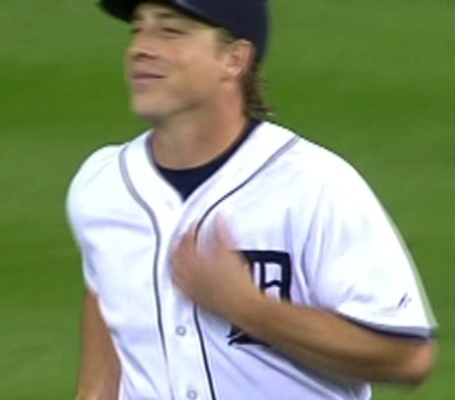 Andy Dirks: If there is such a thing as clutch, Dirks was it. 2 hits, RBI, and a game winning take out slide already being called the play of the season.

Al Alburquerque: I love watching Alburquerque pitch. When he's on, Al-Al is damn near unhittable. He only allowed a single in 2 1/3 innings of work.

Alex Avila: Only 1 hit, but it was massive. His 2 run shot got the Tigers back in the game.

Joaquin Benoit: 1 inning of scoreless relief was enough to snag the victory.

Rick Porcello: Unlike game 163, Porcello came up small in a big game.

Quintin Berry: 0-4. never hitting a ball out the infield.