Doug Fister's 9 consecutive strikeouts set a new AL record, but it took a bases loaded ground out from Alex Avila to give the Tigers a walk off 5-4 win over the Royals.

Doug Fister set a new American League record with 9 consecutive strike outs and Alex Avila hit a bases loaded walk off ground out, leading the Detroit Tigers to a 5-4 victory over the Kansas City Royals. The 4 game series sweep extended the Tigers lead in the AL Central to 1 1/2 games over the Chicago White Sox with 6 games remaining.

Joaquin Benoit blew the save, costing a brilliant Doug Fister the victory, but vultured his 5th win of the season. Tim Collins, the 3rd of 4 Royals pitchers, suffered his 4th loss. Quintin Berry had a 2 RBI triple for the Tigers, Prince Fielder adding 2 hits and an RBI. Billy Butler hit his 28th home run for the Royals.

In his chase for Triple Crown, Miguel Cabrera had a single in 4 at bats.

Fister opened the game by setting the Royals down in order. The dominant inning was bit of foreshadowing, if you will.

After playing stellar defense in the series, the Royals committed 3 errors in the 1st inning, helping the Tigers along to a 2-0 lead.

With 1 down, 3rd baseman Mike Moustakas bobbled, then threw away, Berry's ground ball. Moustakas was charged with 2 errors on the play, Berry ending up on 2nd base. Breaking a 2 game hitless slump, Cabrera moved Berry to 3rd, lining a single to right with an inside-out swing. Fielder gave the Tigers a 1-0 lead by following Cabrera's example, using an inside-out swing on a single to left. Alex Gordon had trouble coming up with the ball, the error allowing Cabrera and Fielder to move into scoring position.

Delmon Young drilled a fly to deep left center, Jeff Francoeur making a nice running catch. The sacrifice fly gave the Tigers a 2-0 lead. Andy Dirks made a bid at making it a 3-0 game by singling to left, but Fielder was easily thrown out by Gordon for the final out of the inning.

The Royals manufactured a threat against Fister in the top of the 2nd, giving the Tigers a scare in the process.

Fister opened the inning by setting down Tiger Killer Billy Butler on a pop up. After a Salvador Perez single and Moustakas fly out, Francoeur turned on a Fister breaking ball, yanking it just left of the foul pole by a few feet. Frenchy would ultimately get on base when hit by a pitch. Fister proceeded to fully dodge the Royals' bullet when Eric Hosmer flied out to left.

Ever in a giving mood, the Royals' committed their 4th error in the 2nd. Alcides Escobar was charged with a throwing error on Omar Infante's infield single, the Tigers' 2nd baseman advancing to 2nd on the miscue. After Austin Jackson walked, Berry ripped a liner just inside the 1st base bag. The ball would rattle around in the right field corner long enough for Infante and Jackson to score, Berry cruising into 3rd with his 6th triple of the season.

Cabrera would end the inning by lining out to center, but the Tigers were able to hang another 2 spot on Royals starter Luis Mendoza, taking a 4-0 lead.

The Tigers also ran into another out in the 4th. Alex Avila singled down the left field line, but was nailed by Gordon trying to leg out a 2 base hit, giving him his 2nd assist on the afternoon.

While the Royals were throwing the ball around on defense, they were doing next to nothing on offense. Fister was, as the TV guys like to say, dealing.

But Fister just wasn't getting easy outs. He took off on an insane strike out binge of 9 in a row for a new AL record, including the sides in the 5th and 6th. The Comerica Park crowd was getting louder and louder as they realized history was in the making. Fister tied the AL consecutive strikeout record at 8 as Gordon went down swinging. Fister set a new standard of 9 when Tigers Killer Billy Butler helplessly flailed away for strike 3.

Looking to tie the MLB record of 10 consecutive strikeouts (set by Tom Seaver in 1970), the streak ended (as did the 7th inning) when Perez grounded out weakly to short.

The strikeout wizardry over, the Royals would kick up their heels in the 8th. They would string together doubles by Moustakas and Francoeur for 1 run, a Johnny Giavotella ground out plated another, narrowing the Tigers' lead to 4-2.

Lough blooped a 2 out single into center to keep the inning alive. Fister crossed up Avila, allowing Lough to move into scoring position on a passed ball. What had been a walk in the park turned into a gauntlet when pinch hitter Tony Abreu singled to right, Lough scoring to make it 4-3 Tigers.

Unquestionably and understandably out of gas, Fister's spectacular day was over after 7 2/3 innings, 3 runs (2 earned), 5 hits and 10 strikeouts.

Phil Coke came out of the bullpen to face the left hand hitting Gordon. He made a bid for a ground single to right, but Infante, ranging far to his left, made a smothering, diving stop, throwing out Gordon to end the inning.

Mendoza was done after 7 solid innings. In hope of keeping the Tigers from scoring any insurance runs, the Royals went with right handed reliever Aaron Crow. He would set the Tigers down in order, including a very frustrated Cabrera, who threw his bat in disgust.

Instead of Jose Valverde, Jim Leyland went with his setup man, Benoit. No word on the reason why, as the Big Potato had needed only 12 pitches to lock down Wednesday night's win. (After the game, Jim Leyland said Valverde had taken ill, and was unavailable.)

Tigers' pitching had kept Tiger Killer Billy Butler under wraps for most of the series. By most, I mean until the 9th inning of this game. He took Benoit's 1-1 pitch to the opposite field and over the wall in right for a lead off, game tying home run.

Benoit would get the next 3 Royals in order, but the damage was done. It would be up to the Tigers' stagnant offense to bail out Benoit.

Fielder hit a high chopper over the head of Royals' reliever Tim Collins. Tony Pena, now at short, was unable to make a bare hand play, the ball rolling into center. Fielder, who had never stopped running, crashed safely into 2nd with a head first slide.

The Royals intentionally walked Young, setting up a force. With the hot hitting Dirks due up, Leyland elected to pinch hit with Ramon Santiatgo. Sent to the plate to move the runners over via the sacrifice, apparently Santiago didn't know the rules say you can bunt on more than the 1st damn pitch.

Collins threw high, inside heat, and for some reason Santiago didn't take, instead reaching up to lay down a half-heared bunt straight to Collins. The un-fleet of foot Fielder was an easy force out at 3rd.

Facing Peralta, Herrera got the double play ball the Royals wanted...which Moustakis badly butchered for his 3rd error of the day. Instead of inning over, everyone was safe on the muff, loading the bases for Alex Avila.

Needing to get his bat on the ball, Avila worked the count to 3-2. Herrera fired a fastball, Avila sent a 1 hop rocket toward Brayan Pena at 1st base. Pena made a miraculous diving stop, tagging the bag for the 2nd out...but he had no play on Kelly at home, who would cross the plate with the winning run.

GAME OVER ON A WALK OFF GROUND OUT!

OK, let me compose myself...

The Tigers sweep the Royals, increase their AL Central lead to 1 1/2 games over the White Sox. The Tigers now head out on the road for a season ending 6 game road trip. They'll have 3 games in Minnesota, then finish with 3 in Kansas City.

I suggest you wear your seat belts.

Fister stuck out the following Royals in order (Click to see video):

Bullets are brought to you by fan number 3 million! 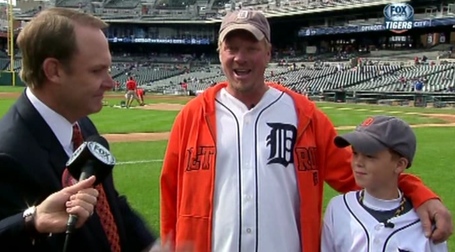 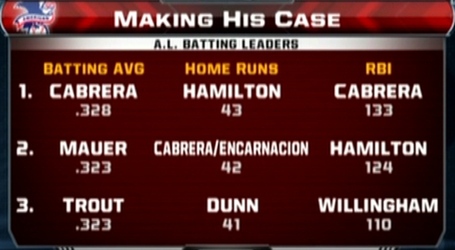 The Triple Crown is still in play, but it's looking tougher and tougher as Cabrera had a tough series.

Baseball really is a game of inches...or feet, in the case of Francoeur's foul fly. 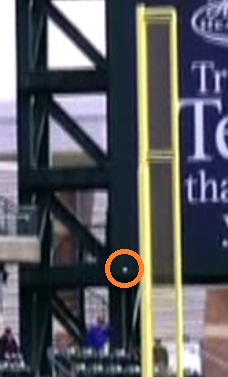 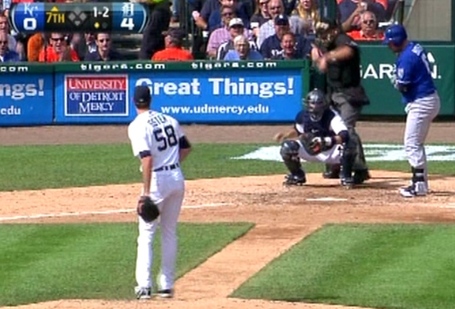 Miggy looking to give Avila a congratulatory cold shower... 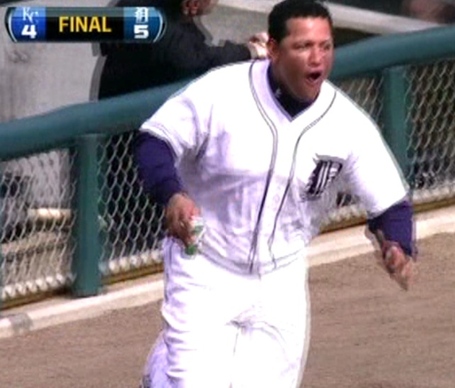 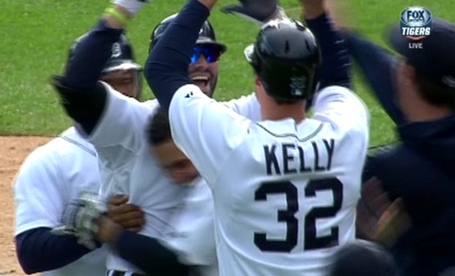 Doug Fister: I'll just use this Twitter exchange between Patrick, aka Tigerdog, and yours truly: Patrick - "We just witnessed something really special, didn't we?" Me - "Yes, we did. Something we'll likely never see again."

Quintin Berry: Just 1 hit, but it was a 2 RBI triple to give the Tigers an early cushion.

Prince Fielder: A 9th inning infield double? That alone gets you a roar, plus he was the only Tiger with more than 1 hit.

Alex Avila: Hit the game wining walk off ground ball on the screws.

2 hits, an RBI and a glorious take out slide allowing the game winning run to score made the Neck, Andy Dirks, the runaway winner of BYB's PotG vote with 74%.