Despite 5 1/3 scoreless innings from Drew Smyly, the Tigers fell 4-2 to the Twins. Jim Leyland will take plenty of heat for how he used his bullpen, though just as much grief should fall on the Tigers' limp offense.

The Detroit Tigers bullpen wasted a wonderful performance from rookie starter Drew Smyly in a 4-2 loss to the Minnesota Twins. The Tigers' lead in the AL Central is down to 1 game over the Chicago White Sox with 5 remaining.

Twins reliever Jared Burton got the final 2 outs of the 8th, enough to receive credit for the victory. Closer Glen Perkins pitched the 9th for his 16th save. The 4th of 4 Tigers pitchers, Brayan Villarreal, took the loss, allowing a pair 8th inning runs.

Designated hitter Ryan Doumit was Twins' offense with 2 hits, his 17th home run and 4 RBI. Omar Infante accounted for all the Tigers' runs with his 4th home run. Miguel Cabrera had 2 hits, keeping his Triple Crown hopes more than just alive, but in fine shape.

If you wanted a pitcher's duel, you got one. Personally, I would have preferred RUNS.

The game started uneventfully. Considering the craziness which were the final innings of yesterday's victory over the Royals, I wasn't complaining...yet.

The first 6 Tigers went down in order against Scott Diamond in the first 2 innings, including a blink of an eye 9 pitch 2nd. Once again, the Tigers were having major issues with a left handed pitcher.

Joe Mauer worked a walk in the bottom of the 1st, the only Twins base runner through 2 innings. Smyly struck out 3 of the 7 Twins he faced to that point.

The Tigers, looking just as ineffective against Diamond as they did in their 10-4 loss on Sunday, went down in order in the 3rd. Including Sunday, Diamond had posted 6 consecutive perfect innings against the Tigers.

Twinkies SS Eduardo Escobar broke up Smyly's hitless game with a lead off single in the 3rd. After 1 was down, the every annoying Denard Span lined a single just past Omar Infante. Escobar, who broke back toward 1st base on the liner, had to hustle to beat Avisail Garcia's hard throw to 2nd.

Ben Revere moved the runners over on a ground ball, setting up a Smyly vs Mauer batter. Even with 1st base open, the rookie went right at the 2nd leading hitter in the AL. Smyly struck out Head and Shoulders' spokes-model on a 2-2 pitch, Houdini-ing himself out of a jam.

Just as thoughts of a Diamond no-hitter were cropping up in the back of your mind (admit it!), Cabrera shut up the voices in your head. Cabrera ripped a line single to left after 2 were down in the 4th, the Tigers' first hit and base runner. Unfortunately, any hope of a 2 out rally ended on Prince Fielder's foul pop.

Pitching quite ably in place of sidelined Max Scherzer, Smyly set the Twins down in order in the 4th. The clock was ticking on his night, being Smyly has never gone more than 106 pitches or 6 innings in his career.

To break out an old bromide, the Tigers threatened, but did not score, in the 5th. Leading off, Delmon Young singled to center. After the Slumping Jhonny Peralta (I'll just use that as his full name from here on out) flied out to deep center, 1st baseman Justin Morneau bobbled Andy Dirk's grounder, the Neck beating a late throw, Young safe at 2nd. Diamond would escape further trouble fairly easily, Garcia going down on a can of corn to Span, Gerald Laird grounding out 4-3.

Smyly did his part in matching Diamond with a 1-2-3 5th. Through 5, Smyly has sent 8 straight Twins down in order. It would be a damn shame for the Tigers to hang a no-decision on the rookie...but it sure was looking that way.

Cabrera made a bid to give the Tigers a 1-0 lead with 2 down in the 6th. He took Diamond the opposite way, missing a home run by a couple of feet as his fly ball hit off the top of the right field wall. Thinking home run off the bat and going into a trot, the ball being hit so hard, and Revere immediately grabbing the carom, Cabrera was held to a long-ass single.

That would ultimately cost the Tigers a possible lead.

Fielder singled Cabrera to 2nd, bring up the Tigers' much derided DH. Going with the pitch, Young's ground ball found the hole in the right side. In the case of a slow runner vs. a bad thrower, you have to take your chances. So Gene Lamont windmilled Cabrera home.

It wasn't even close. 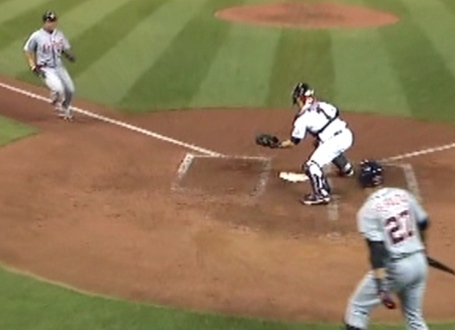 Revere came up throwing, shockingly sending a one hop bullet to Mauer. Cabrera was out by 10 feet, the game remained scoreless. No word on who the imposter with the good arm was in right field for the Twinkies, as it sure wasn't Revere.

Smyly would get the first out of the 6th, the 9th consecutive Twin to take a seat. With 3 left-handed bats due up and having watched his pitch count closely, Jim Leyland decided Smyly had done enough for one evening. Phil Coke took over fot LOOGY duty. Having shrugged off his August from Hell, Coke easily sent Ryan Doumit and Trevor Plouffe packing to end the inning.

But Diamond was no diamond in the rough, helped by the Tigers pretty much hacking at any and everything he threw, pitching a another ridiculously easy inning, a 1-2-3 7th.

Fielder showed how ironic his name was by muffing Morneau's ground ball for an error to start the bottom of the 7th. With the switch hitting Doumit at the plate, and Coke having proved he's best used as a LOOGY, it was time for a pitching change, right?

Yes, Doumit's numbers against left handed pitching weren't great. But Coke has thrown nothing but batting practice against right-handed bats this season. He's become a LOOGY. Why take a chance when Octavio Dotel is warming up? Why put Coke in a position to fail after doing his job against the 3 consecutive left-handers?

Regardless, Leyland rolled the dice with Coke...and crapped out. Doumit drilled a 2 run home run to left, ending Coke's night and giving the Twins a 2-0 lead.

Of course, now Dotel came to the rescue. He allowed a couple of scary warning track fly balls, but left the inning unscathed.

While the internet full of tubes was still cursing Leyland out in the top of the 8th, Austin Jackson's ground ball went through Plouffe's wickets at 3rd. He was safe at 1st on the fielding error.

Up next, Infante. After one swing, his crusty manager was bailed out and Diamond's night was over.

Infante clubbed a no-doubt 2 run home run over the high wall in left, tying the game at 2-2. The calls for Leyland's job slowed to a crawl...for the time being, anyway. The cries for a head on a platter would be starting again shortly.

Burton came on in relief for the Twins, keeping the damage to a minimum when Cabrera grounded out to end the inning.

It being a brand new game, Villarreal started the bottom of the 8th for the Tigers. He immediately put himself in a massive jam thanks to lacking in command and composure.

Wild off the bat (or mound, actually), Villarreal walked Span. Revere bunted him over. Villarreal crashed and burned from there on out. The Tigers elected to intentionally walk Mauer. Villarreal nearly threw the first pitch to the backstop, Laird having to use every inch of his vertical to avoid a wild pitch. Villarreal proceeded to make a bad situation worse by ignoring Span, who got such a big jump he stole 3rd without a slide, and walking Morneau to load the bases.

For the 2nd time in 2 innings, Doumit would twist the dagger in the Tigers' back. He hit a Villarreal pitch on the screws for a 2 RBI double to left center and a 4-2 Twins lead. Villarreal, suddenly finding his command and composure when down 2 runs, struck out Plouffe and Matt Carson to end the inning.

Down to their final 3 outs, Young, Peralta and Dirks came up snake eyes against Twins' closer Glen Perkins in a 1-2-3 inning.It was cake, as they say.

You know it's going to happen and I can't blame an infuriated fan base tonight. Let the second guessing of Jim Leyland begin.

Before we all panic and flame away, keep in mind the Tigers have Justin Verlander on the mound tomorrow and Anibal Sanchez Sunday. I like the Tigers' chances in the next 2 games.

Where does the Tigers' MVP candidate stand in the Triple Crown categories going into the final 6 games?

The Triple Crown is in play.

MLB rule of the day: All Tigers catchers must have, at bare minimum, a 2 day growth of beard at all times. G$ complied. 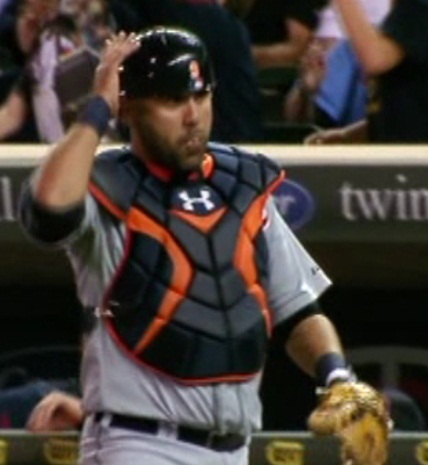 How not to issue an intentional walk, by Brayan Villarreal. 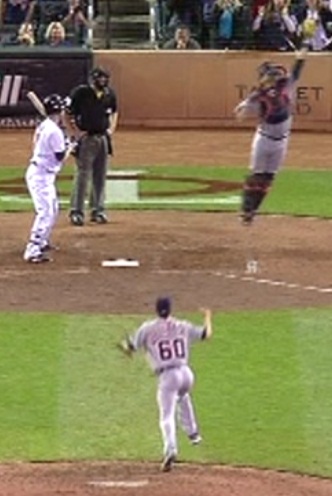 Miguel Cabrera: Ends his-mini-slump with 2 hits, raising his lead in the batting race.

Jim Leyland: I'm fine with using Phil Coke against left handed bats. Using a LOOGY, which is what Coke has become, against right handed bats is asking to be second guessed to high heaven...or Hell, as the case may be Second guessing commenced immediately after Coke's pitch left Ryan Doumit's bat.

Brayan Villarreal: Any talk of Villarreal being in line for closer duty anytime soon ended tonight.

Tigers' offense: 6 hits and 2 runs against the bottom feeding Twins won't cut it in a pennant race.