The Detroit Tigers put a 7-1 win on ice with 5 run 8th inning, salvaging the final game of their 3 game series with the Cleveland Indians. Tigers' starter Doug Fister allowed just 1 run in 7 innings of work for the win. Ubaldo Jimenez pitched into the 8th for the Tribe, but was pegged with his 15th loss.

Miguel Cabrera homered and had 3 RBI to the lead the Tigers' attack. Jhonny Peralta added 2 hits and 2 RBI, Prince Fielder also homering. Michael Brantley's RBI single was all the Indians could muster against Fister and Jose Valverde.

The Tigers got on the scoreboard before the Indians for the first time in this series, taking a 2-0 lead in their half of the 1st inning. Austin Jackson led off with a single, advancing to 2nd on Andy Dirks' hit and run ground out. Jackson would ride home on Miguel Cabrera' no-doubt, no-question, no-problem home run to deep right, his 35th big fly of the season.

The Tigers continued to run in the 2nd. Peralta singled with 1 out. Running on the 3-2 pitch to stay out of the double play, Peralta advanced to 2nd on Alex Avila's ground out. But Omar Infante, who is in midst of a brutal slump, popped out to short left to end the threat.

After Fister had set down 8 straight, the Indians strung together singles from Jason Kipnis, Carlos Santana and one of the RBI variety from Brantley to make it a 2-1 game in the 4th. With 2 on and 1 out and a run scored, the Indians looked to be on the brink of a crooked number. But Fister pitched out of further trouble via a ground out and K.

From that point, the bats quieted down. And by "quiet down," I mean "disappeared until the 8th."

After the Tribe scored in the 4th inning, both teams had the occasional base runner, but not coming close to what could be considered a threat. Avila singled in the 5th, Prince Fielder in the 6th, neither moved past 1st base. Asdrubal Cabrera walked in the 6th for the Tribe, but was eliminated on a slick 3-6-3 double play by the Tigers.

Fister's night was done after 7 innings, 1 run, 4 hits and 109 pitches. Joaquin Benoit came on in his usual 8th inning set up role. He immediately made it difficult on himself, walking the lead off man, Cabrera, and throwing balls on 6 of his first 7 pitches. But before you could say "bullpen meltdown," the inning was over. Casey Kotchman pinch hit for Jason Donald, flying out. The inning then ended on a a marvelous double play turned by the Tigers. I'm serious!

Peralta leaped high to avoid the take out slide... 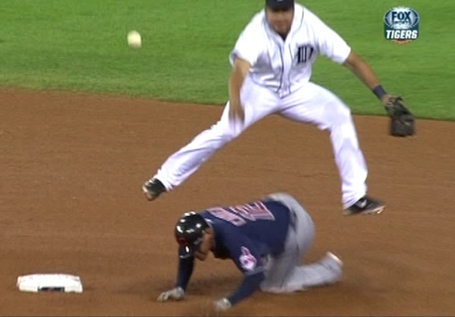 Fielder making the nice pick of the low throw the finish the play. 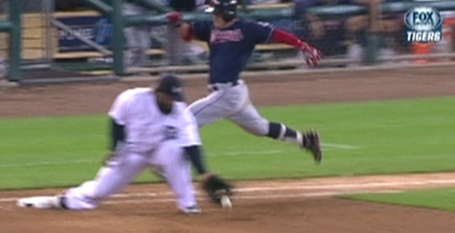 Having thrown only 81 pitches, Jimenez took the mound in the 8th. The Tigers made him pay by FINALLY taking a base on balls. With 1 out and no one on,. Jackson worked Jimenez for the walk, the Tigers' first of the game. Dirks followed by ripping a shot down the line into the right field corner. By the time Shin-Soo Choo had corralled the ball, Jackson had scored, Dirks had necked out a triple and Jimenez was in the showers with the Tribe down 3-1.

Cody Allen entered the game in relief for the Indians, and the pitcher's duel was no longer. Dirks would score on Cabrera's sacrifice fly, making it a 4-1 game. Fielder took Allen to the opposite field, his big fly just clearing the fence in left, banging off the roof of the bullpen, his 24th home run of the season. The Tigers were up 5-1 and rolling.

When the dust had settled, what had been a nail-biter was now a 7-1 blowout. The Tigers had batted around, scoring 5 runs on 5 hits. And as Rod Allen noted, it all started with a walk.

Jose Valverde had been warming up in anticipation of a save opportunity. With the that out the window thanks to the 5 run 8th, the Big Potato took the mound anyway, being he was warmed up. No save opportunity, no problem. Papa Grande's 1-2-3 inning sent the Tigers out of town on winning note.

The Tigers are just 1 game back as they head for La-La Land.

Jason Donald must love to troll Brennan Boesch. He robbed Boesch of double in the 2nd inning with a marvelous leaping catch. 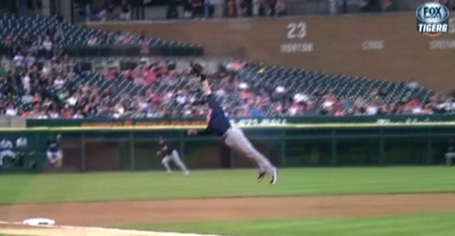 In the 4th, Boesch's foul pop appeared to be heading into the seats. That was until Donald pulled a Brandon Inge, landing in the 1st row... 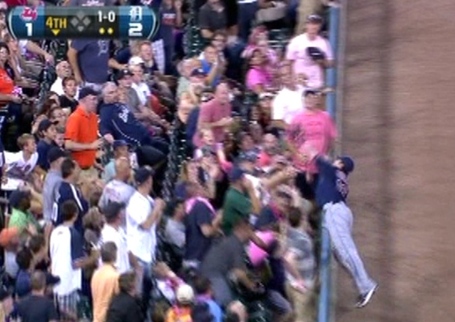 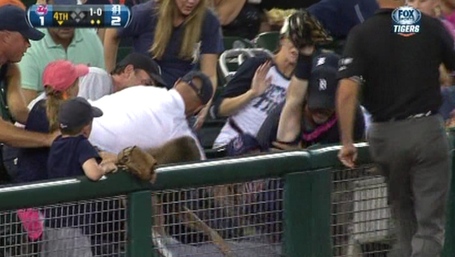 Doug Fister: Didn't get much run support. But Fister didn't need it in tossing 7 solid innings of 1 run ball.

Jhonny Peralta: Had only 3 hits and an RBI on the home stand going into tonight. Broke out of a small slump with 2 hits and 2 RBI.

Brennan Boesch: Went hitless, much in thanks to Donald's glove work.

Omar Infante: An 0-3 evening. left Infante 0 for the series.