The Los Angeles Angels were walk off victors against the Detroit Tigers thanks to Alberto Callaspo's 9th inning RBI single. Octavio Dotel took the loss in relief for the Tigers. Ernesto Frieri, the last of 5 Angels pitchers, received credit for the victory.

Prince Fielder and Alex Avila hit solo home runs for the Tigers. Kendrys Morales led the Angels with 3 hits. In the battle of AL MVP candidates, both Mike Trout and Miguel Cabrera had 1-4 nights.

The Angels took a lead only 2 batters into the game. Leading off, Mike Trout took a Scherzer fastball tro right center for a stand-up double. On the next pitch, Torii Hunter bounced an RBI single up the middle, giving the home team a 1-0 lead. After Albert Pujols forced Hunter, Morales fought off a Scherzer fastball, dropping a double in short left as Pujols jogged to 3rd. Pujols would score on Howie Kendrick's 4-3 ground out.

Scherzer wasn't missing bats. Worse, the Angels weren't hitting the ball hard, but were finding holes. It added up to the Tigers having to dig out of a 2-0 hole.

Ervin Santana didn't miss Fielder's bat in the 2nd, the big man going deep to lead off the inning. Fielder's 25th home run of the season made it a 2-1 game.

Alex Avila hit his first home run in almost a month leading off the 3rd, the Tigers' 2nd solo shot of the night tying the game at 2-2. It was Avila's 8th homer of the season, and first since August 9th.

The time zone change must have affected Scherzer (that, or his blue eye kicked in), as he woke up after allowing the 2 quick runs. Starting in the top of the 2nd, Mad Max went on an absolute tear, striking out 5 consecutive Angels. Pujols broke up the K streak by popping out. Hey, an out is an out, alright?

Santana countered by striking out the side in the 4th, mowing down the meat of of the Tigers' order - Miguel Cabrera, Fielder and Delmon Young. (One of these things is not like the others, One of these things just doesn't belong...)

Scherzer's consecutive out streak ended at 10, Erick Aybar doubling down the left field line with 2 out in the 4th. The the inning ended harmlessly on a can of corn to center. With one out streak over, Scherzer went ahead and started another, setting down the Angels 1-2-3 in the 5th.

The Tigers threatened, but did not score in the 6th. Fielder doubled with 2 out, but Young struck out swinging to end the threat.

Next verse, same as the first - The Angels threatened, but did not score in the 6th. Morales tripled over a leaping Jackson, who appeared to misjudge just how close he was to the wall. 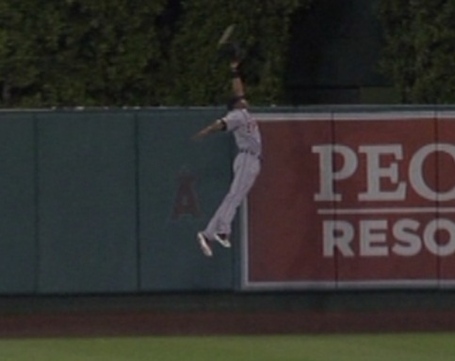 Runner on 3rd with 2 out in a tie game? Not a problem when you can miss bats. Scherzer was able to pitch out of the jam by striking out the ever dangerous Kendricks.

The chin-strap wearing Santana was pulled after his 10th strike out and 6 2/3 innings. To be honest, I was relieved. Santana was extremely effective, the Tigers unable to connect with his slider. Lefty Scott Downs came on to face Avila, walking him.

With light hitting Ramon Santiago due up, Jim Leyland went with lighter hitting Ryan Raburn as a pinch hitter. Angels manager Mike Scioscia countered with right-handed reliever Garrett Richards. The battle ended as expected and damn quickly at that, Raburn nubbing the first pitch back to Richards for an easy 1-3 ground out. So...yeah.

Young led off the 9th with a single, and was replaced by pinch runner Quintin Berry. Everyone on the planet knew what Berry was going to do, including Angels reliever Ernesto Frieri. He caught Berry leaning, and nearly picked him off. (I wouldn't have argued if he had been called out, it was that close) With the count 2-2 on Brennan Boesch, Berry took off. The Angels had called a pitch out, the ball, Berry and Aybar all arrived at the bag at the same time. But the throw was in the dirt, Aybar couldn't hold on to the ball, Berry was safe and in scoring position.

But Boesch struck out (Ugh. Just...ugh) Jhonny Peralta grounded to short for the 2nd out, and it appeared the Tigers were on the verge of a soul-crushing squander. That was exactly what we got, Frieri striking out Avila on 3 pitches.

That sound you heard at 12:45 AM Saturday morning was Tigers fans groaning across the country. After the complete fail that was the Tigers' 9th, I'm sure we all felt this game was not going to end well.

After 8 innings, 2 runs, 9 strike outs and a frustrating no-decision, Scherzer's night was over. Octavio Dotel took over for the 9th. Morales singled with 1 out. Cabrera had no play on Aybar's swinging bunt, Morales advancing into scoring position. Alberto Callaspo (and his career .886 OPS against the Tigers) was called on to pinch hit. Down 1-2 in the count, Callaspo slapped a ground ball just past a diving Peralta...

And the Angels walked off.

I'm not going to blame Dotel. The Angels didn't hit the ball hard, they just found holes. When a swinging bunt is the centerpiece of a rally, it's hard to blame the pitcher.

I'm not going to blame the defense. Regardless of his range issues, it wasn't an easy play for Peralta. Let's be honest. Every one of us knew this team would not play great D, and would have to score runs to win. The Tigers didn't.

I can and will put the blame on the Tigers' offense. 2 runs and 6 hits will not win games, especially those in September played in a playoff atmosphere.

If there is a tiny, thin silver lining this morning, it's the White Sox lost. Small consolation, the Tigers didn't lose ground in the standings. But they did waste a great pitching performance and lose a chance to move back into 1st place.

The entire game felt like playoff baseball, to say the very least. high stakes make for great baseball games, like we witnessed tonight. It also means the wins are even sweeter, and the losses that much more heart rendering.

Welcome to a pennant stretch run, folks. It's gonna be fun...Honest!

The first screen cap of the night is also the celebrity quote of the night: J.K.Simmons, one of the most well known "it's that guy!" character actors and a big Tigers fan, had this to say about Jim Leyland while being interviewed in the broadcast booth: 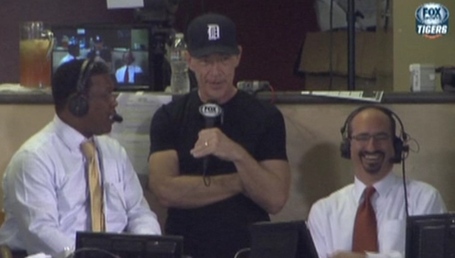 "He doesn't like to associate with the TV riff-raff!"

Moving on to baseball matters, it's always entertaining (and a little worrisome) when Prince Fielder rumbles around the bases, as we saw in the 6th...

And yes, the big man was safe. Unfortunately, the Tigers couldn't capitalize on Fielder's hustle.

Max Scherzer: Deserved a far better fate than a no-decision.

Prince Fielder: The only Tiger with more than 1 hit.

Quintin Berry: He did his job in the 9th. No one else did.

The offense and the lack thereof: 6 hits, 13 strike outs, 17 LOB, the utter failure with Berry in scoring position in the 9th inning. I hope we don't look back in 3 weeks, and ....no, I'm not going there. Not yet.

Internet idiots: When Internet tough guy Tigers "fans" (term used loosely) are calling for Leyland's firing (Again? Give it a f'n rest until the end of the season) and trolling the beat writers, spewing profanities at them on Twitter because their coverage of the team doesn't fit the agenda of know-nothing morons, it makes me ashamed to be a fan of this franchise. I swear the IQ of the Detroit fan base drops 50 points after a loss.

Thank goodness the community at BYB is better than all that, right?

Allowing just 1 run in 7 innings in a win over the Indians put Doug Fister over the top in BYB's PotG voting with 62%.