The Los Angeles Angels rode 4 1st inning runs off Justin Verlander to a 6-1 victory over the Detroit Tigers. With the loss, the Tigers fell 2 games back of the White Sox in the AL Central.

Verlander was hit hard in taking his 8th loss of the season. C.J. Wilson pitched into the 8th, winning his his 12th game of 2012 for the Angels.

Albert Pujols led the Angels with 3 hits and an RBI, Kendrys Morales doubling twice and knocking in a run. The Tigers' offense was Omar Infante, who reached base 3 times.

It was one of the uglier 1st innings in memory for the Tigers. Base running blunders and Verlander getting rocked. Omar Infante singled with 1 out in thr 1st. Miguel Cabrera followed with a long drive to the warning track in right. For some reason (FSD's Rod Allen thought Torii Hunter's deke was it), Infante had rounded 2nd on what was a fly out. His tee-ball level baser running faux pas meant he was dead to rights at 1st. Inning over.

The bottom half of the inning was worse. Verlander, for lack of a better word, threw batting practice. Mike Trout led off with a long home run to left on Verlander's 3rd pitch. With 1 out, Albert Pujols walked, Kendry Morales doubling him to 3rd. Howie Kendrick's 2 RBI double (a ball Ryan Raburn played awfully casually in left) gave the Halos a 3-0 lead. The Baseball Gods twisted the knife a little deeper when .231 hitting Vernon Wells lined a double to left, Kendrick crossing the plate to make it 4-0 Angels.

Verlander faced 8 batters, threw 29 pitches, allowed 4 extra base hits and 4 runs. You would have swore it was Nate Cornejo on the mound instead of the reigning Cy Young and MVP.

To make a sour evening worse, after Prince Fielder walked, Delmon Young grounded into a 5-4-3 double play in the 2nd. 3 up, 3 down is one Hell of a way to counter a 4 run inning.

The Angels' bats just weren't abusing Verlander, the umpires were getting it as well. Home plate ump Jeff Kellogg took a foul ball directly into his mask in the bottom of the 2nd, knocking him out of the game with what was likely a concussion. Kellogg may have taken an awful shot to the head...but on the plus side he didn't have to watch the rest of the game.

The 3rd inning was more of the same. Leading off, Pujols doubled off the base of the wall in right center. Morales then drilled Verlander's first pitch fastball into left center, his second consecutive double plating Pujols. It was 5-0 Halos after 3.

The Tigers woke from their semi-coma for 2 batters in the 4th. Maicer Izturis threw Austin Jackson's ground ball into the tarp, the error putting Jackson in scoring position. Infante's RBI single made it a 5-1 deficit. But Cabrera grounded into a double play to end any chance at a big inning...or even an inning with a little life.

After the inning ended, Cabrera (who had been getting into it with the umpires during his at bat) and Gene Lamont got into a discussion with umpire Tim Timmons, who summarily tossed both. Why? Hell if I know. Must have said the magic (and unprintable) words.

The ridiculousness reached a crescendo in 4th. Verlander walked Trout with 2 out, The rookie advanced to 3rd on Hunter's single. Pujols hit a hard ground ball up the middle. Verlander stuck his foot out, deflecting the ball directly to Danny Worth, who had moved to 3rd from SS after Cabrera's ejection. But Worth muffed the kick save, not even able to make a throw. Pujols was credited with an RBI single, the Halos now up 6-1.

The Tigers threatened in the 6th...you know what's coming...but did not score. Danny Worth and Jackson singled after 1 was out. Infante then drilled a fly to deep left center, but Wells ran down what looked to be a 2 RBI double when the ball left the bat. Peralta stuck out, stranding the runners.

Wow, a team with great corner outfield defense. What a concept!

Verlander's night ended after 6 innings, 6 runs, 9 hits and only 3 strikeouts. Luke Putkonen took over...which pretty much says it all. Then again, I shouldn't rag on Putkonen. He pitched better than Verlander, not allowing a run in his 2 innings of work.

Wilson was pulled after 7 2/3, the Tigers only mustering 4 singles and 1 unearned run. Garrett Richards set down the final 4 Tigers in order.

And that,. as they say, was that sucked.

I'm frustrated too. Well, I'm extremely frustrated, going by the tone of my recap. Yet it's only 2 losses, even if they were a walk off and blow out. A loss is a loss, doesn't matter how it happens. And 2 games back in the standings does not mean the season is over. Hell, even if the Tigers get swept by the Halos, there's no reason to fold up shop.

But if the Tigers play like this in Chicago… 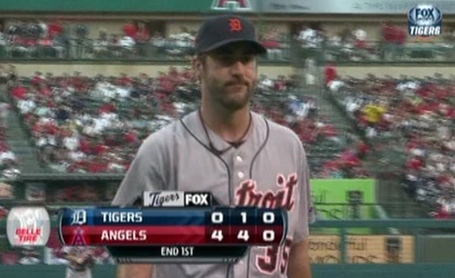 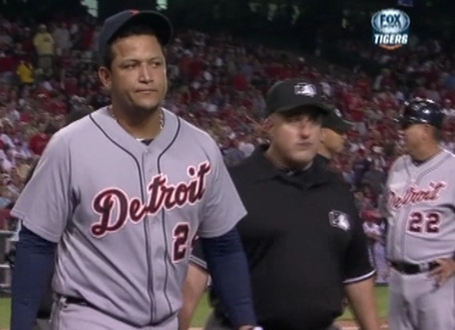 Justin Verlander:I have no explanation for Verlander's throwing batting practice early in the game. With the Tigers' offense struggling to score runs, a 5 run deficit was a death sentence.

Miguel Cabrera: I'm sorry, but your best player can't get his ass tossed out of a game in the middle of a pennant race. Cabrera hitting the showers was the equivalent of driving a stake through the heart of the Tigers' offense.

The rest of the Tigers' roster: Seems fitting, as this truly was a team loss of the worst klind.

Max Scherzer pitched well enough to win the game. Unfortunately, through no fault of his own, the only win for Mad Max was BYB's PotG honors.