Share All sharing options for: Angels 3, Tigers 2: Another day, another 1 run loss

The Los Angeles Angels rode home runs by Mike Trout and Alberto Callaspo to a 3-2 victory over the Detroit Tigers, sweeping their weekend series. Anibel Sanchez pitched 7 solid innings for the Tigers, but got no run support in taking the loss. Zack Greinke didn't get much more support from the Angels' offense, but 3 runs were enough to receive credit for the win. Ernesto Frieri pitched the 9th, posting his 18th save.

Andy Dirks homered for the Tigers, Brennan Boesch adding an RBI double. Trout went deep for the 27th time for the Angels, Callaspo hitting his 9th big fly of the season.

Next verse, same as the first...or in this case, same as last night. The Tigers opened the game with a 1-2-3 inning. Doing his damnedest to crush any and all MVP hopes for Miguel Cabrera, Mike Trout leds off by going yard.1-0 Angels.

In the 2nd, Sanchez dug the Tigers into a deeper damn hole. Erick Aybar singled with 1 out. Austin Jackson bailed out Sanchez, at least for the moment, by making a highlight reel grab, reaching above the wall to haul in Mark Trumbo's home run length drive for the 2nd out. But Alberto Callaspo killed the Tigers for the 2nd time in the series, homering to deep right...too far for even Jackson to bring back, putting the Angels up 3-0.

Considering the Tigers' struggles to score of late, 3 runs is an insurmountable lead.

Sanchez kept on living dangerously in the 3rd. Albert Pujols doubled, advancing to 3rd on a wild pitch. But Sanchez got out of further trouble by striking out the dangerous Kendrys Morales.

Even if it looked as if the Tigers are going to go down meekly, Andy Dirks wouldn't, necking a ball over the wall in right to lead off the 4th. His 6th home run of the season made it a 3-1 game.

All praise the neck, all bow to the neck.

The Tigers continued to age me prematurely, skirting on the edge of disaster all afternoon. In the 5th, Sanchez allowed another Angel to reach scoring position, Hunter doubling with 2 out. but Sanchez kept hope of a quality start alive by inducing Pujols to foul out to Avila.

In the 6th, after Omar Infante grounded out to Greinke, Jackson singled. In an effort to get the Tigers' offense jump started, Jim Leyland sent Jackson on a 3-0 pitch. But Greinke threw a fastball, Chris Iannetta's throw was perfect, Jackson was dead to rights. The neck couldn't overcome the caught stealing, Dirks striking out to end the inning. So much for that idea.

But....there was a flicker of life in the 7th! Prince Fielder hit a fly ball to deep right center, which looked like it had home run distance...for a second or 2, as it died a sad death at the warning track. Young followed with a infield single to short. Aybar threw the ball away trying to make a play, sending the 'stached one into scoring position.

Brennan Boesch came through with something I thought went extinct this weekend, a 2 out hit with RISP. He looped an RBI double down the left field line, scoring Young. But the hit parade stopped, and so did a chance at a crooked number, when Greinke struck out Jhonny Peralta.

I know what you were all thinking - "Here we go again, another 1 run loss." I was too.

Thinking the same thing, Sanchez bore down in the 7th, setting down the Angels 1-2-3 for the first time all afternoon.

Alex Avila may not be hitting well, but he is still getting on base thanks to his ability to take a walk. He led off the 8th by drawing his 54th base on balls this season. Quintin Berry came on to pinch run. Infante sacrificed baseball's most enthusiastic clapper to 2nd.

It looked as if the bunt would work when Jackson lifted a fly to short center which had "BLOOP HIT" written all over it. But Peter Bourjols. who had entered the game in the 7th, Trout moving to left to get Trumbo's stone hands out of the game, made an excellent running catch to rob Jackson of a hit and RBI. Dirks and his neck could not come through with a 2 out hit, striking out for the 2nd time, ending the threat.

Sanchez's day was done after the 7th, having thrown an efficient 97 pitches. Brayan Villarreal made only his 2nd appearance of September, taking over in the top of the 8th. He came out throwing near 100 MPH heat. Villarreal walked Torii Hunter, but put down the meat of the Angels order, Pujols, Morales (K on a wicked 99 MPH fastball) and Howie Kendrick to keep the Tigers within a run.

If the Tigers were going to come back in the 9th against closer Ernesto Frieri, the right men were due up - Cabrera and Fielder. Frieri was going to have to work for it. Cabrera fell behind in the count 0-2, but worked a walk, putting the tying run on base. Pulled for pinch runner, Cabrera replaced by his younger, faster clone, Avisail Garcia. But Fielder stuck out, the 9th Tiger to whiff.

Young followed, swing from the heels. After fouling off a handful of pitches, Young...wait for it...struck out on a low, outside and out of the strike zone breaking ball.

Boesch was the Tigers' final hope. With 2 strikes, he hit a ground ball off the end of his bat...game ov...NO! Callaspo booted what would have been the 3rd out. The E-5 moved Garcia into scoring position.

Was this series a disaster? For the Tigers' wild card hopes, sure. But not when you're only 2 games down and play 4 with the team you're chasing starting tomorrow. But if the bats don't come alive? Well, as I said on the BYB Podcast, the Tigers can't win the division on this 10 game road trip, but they could lose it.

Starting a 10 game road trip 0-3, scoring only 5 run in the process? I'm seriously concerned. But the next 4 games will tell the story. Let's hope we're not talking about the end of the story come Thursday night.

SCREEN CAPS OF THE DAY: 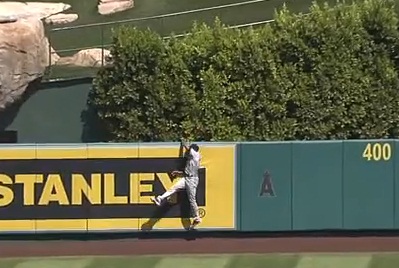 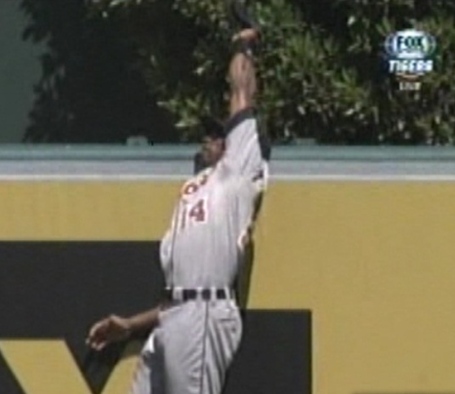 All Trumbo could do was turn his smile upside down. 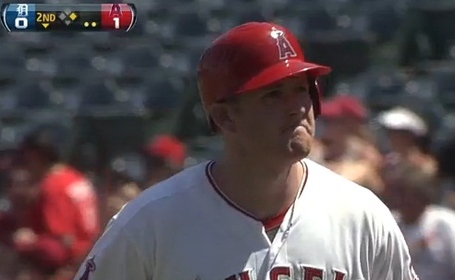 Pick any Tiger who owns a bat.

As no Tigers were deemed worthy while sleep walking through a God awful loss, it was FSD announcers who made up the poll. So Rod Allen wins what he couldn't in his short time spent on the bench of the 1984 Tigers, or while he was angrily chasing pitchers in Japan, a player of the game award.