The Delmon Young Era: An Epitaph (or, Hooray for Victor Martinez)

Share All sharing options for: The Delmon Young Era: An Epitaph (or, Hooray for Victor Martinez)

With Delmon Young signing with the Phillies yesterday, Tigers fans can finally breathe easy in 2013. There was no chance Delmon might come back to Detroit with the home squad, but as every hypochondriac knows, just because something is unlikely to happen doesn't mean you can just stop worrying about it. Now, though, the new contract at last draws the Delmon Young era to an official close.

What a terribly confusing era it must have been. Young did markedly worse at the plate in Detroit than he did in Minnesota, hitting .268/.296/.422 over 191 games. Yet, he also played the hero in back-to-back postseasons, clubbing eight homers in 22 games and winning the ALCS MVP last year. Ultimately, the heroics only go so far; it's hard to justify keeping a guy on the roster for six months if he's only going to hit in one of them -- the one he's actively working against your even getting to. Better still, in replacing Young with Victor Martinez, the Tigers are looking at perhaps the biggest offensive upgrade of any team at any position.

Among players who (a) played at least 100 games in a season, and (b) played at least 75 percent of those games as a DH, Young's 2012 was the 20th-worst in history (out of 262 player seasons) according to OPS+ (89). Want more? He played more often than any other player "above" him on that list except for a 40-year-old Eddie Murray in 1996, meaning that he was hurting his team more deeply more often than almost any other DH in baseball history. In fact, aside from Murray, the closest DH to Young in terms of plate appearances was the 41-year-old Paul Molitor in 1998, who finished 49 PAs back. In other words, in letting Delmon flail the Tigers were unlike almost every other team of the DH era, who, when confronted with a DH this bad, almost inevitably made a change. (See table below.)

The picture gets even worse when we consider Young's production just as a DH. He hit only .260/.287/.388 in the role. Using Baseball Reference's new (and completely awesome) Splits Play Index, we know that that's the 9th-worst raw OPS of any batter with more than 100 games at DH and the 13th-worst OPS+. Tigers DHs finished essentially tied for second-to-last in the AL in OPS+. That friends, is downright putrid, even historically putrid.

Incredibly, the team's epic failure to place a hitter at the one position at which hitting is the only requirement did not keep it from reaching the World Series. It's a remarkable testament to the rest of the club that Dave Dombrowski built (as well as to Mike Illich's largesse) that Young's failures didn't sink a club in a close race. Now, with Martinez's return from injury, they have one of the game's most consistently excellent hitters to replace him (and without adding any payroll).'

It's hard to overestimate, then, the potential impact that Victor Martinez could have on this Tigers lineup when he returns this spring. Before succumbing to a torn ACL last year, Martinez was one of the most consistent hitters in the Major Leagues, posting an OPS+ between 122 and 131 in seven of his previous eight seasons (he suffered through debilitating bone spurs in his elbow in the other). Martinez is simply a hitting machine who has never been worth less than 2.5 wins in a full season of work.

Admittedly a good deal of that value has come from Martinez's ability to catch. Still, having a DH who can actually hit promises to be all sorts of fun for the Tigers in 2013, and is a huge reason why they're the odds on favorite to repeat in an AL Central that actually got better this offseason. 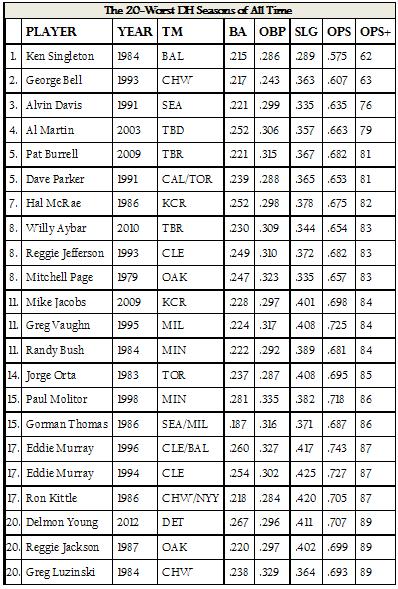