Torii Hunter could be what the Tigers need for chemistry, Justin Verlander and Max Scherzer voice displeasure over new balk rule, and the Tigers have options if Rick Porcello is traded. These stories and more in today's Morning Prowl. Also, make sure to check out Kurt's post for all the updates from TigersFest! 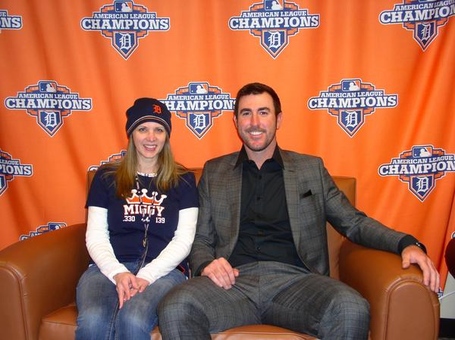 This is the part where we're all incredibly jealous of Jennifer Cosey from Old English D, who tweeted this photo Saturday.

Tigers have options if Rick Porcello is traded
The Detroit News, Lynn Henning

Deep within the Tigers camp's trauma ward, doctors are treating fans shaking and convulsing over Detroit's starting pitching in 2013. Folks are scared. They fear Porcello will be traded.

Under a rule change imposed by Major League Baseball, the fake-to-third, throw-to-first ploy will now be ruled a balk.

Looking back on it now, Torii Hunter still menacingly glares. In a 2002 game against Cleveland, Indians pitcher Danys Baez drilled Hunter with a fastball to the ribs. Hunter admitted that he immediately 'saw red.'

Jim Leyland spent a good amount of time at TigerFest trying to caution about expectations — it’s OK for fans to have them, he said more than once, but the team has to be cautious about allowing those expectations to affect them.

Yesterday, at the Detroit News, Lynn Henning wrote that the "Tigers have options if Rick Porcello is traded". His point is that if Porcello were moved out of the picture, the Tigers would still have three or four reasonable options to call up to make some starts.

The fake to third, throw to first move is now officially a balk
HardballTalk, Craig Calcaterra

We talked about this when the owners voted to ban the move at the owners meeting a couple of weeks ago.

One of my favorite stories of the 2012 season was Vin Scully’s humorous attempt to lip read Jim Tracy’s outburst towards umpire Mike Everitt.

Earlier this month, the Kansas City Baseball Historical Society scored big with the appearance of George Brett, and a guest blogger over at Kings of Kauffman posted some choice quotes.