The ALCS shifts back to Boston tonight as the Red Sox try to close out the Tigers before a winner-take-all Game 7. Max Scherzer and Clay Buchholz are tonight's starting pitchers.

SB Nation blog: Over the Monster

The Tigers handed Clay Buchholz his worst start of the season in Game 2, knocking him around for five runs on eight hits in 5 2/3 innings. He struck out six and didn't walk anyone, but make no mistake: he was hit hard. Miguel Cabrera and Alex Avila both homered off Buchholz.

Avila, in particular, seemed to be seeing Buchholz especially well. He lined a single back up the middle in the second inning for another RBI and got under another hittable pitch with runners on base in the fourth. Losing him tonight would be a big loss for both the offense and defense.

Meanwhile, Scherzer turned in arguably the most dominant start of the ALCS for the Tigers so far, allowing just one run and two hits in seven innings. He struck out 13 while walking two, and didn't allow a hit until the sixth inning. One thing to watch will be how much life he has on his fastball. After Game 2, Scherzer said that he was "exhausted" after his 108 pitch outing, dispelling any notion that he should have started the decisive eighth inning.

However, thanks to the travel days between Games 2 and 3 and Games 5 and 6, Scherzer will be starting on five day's rest. In 53 career starts after five day's rest, his ERA is a half-run lower and his strikeout rate goes up by 3.5% compared to a normal four days' worth of rest.

Question of the day: Will Clay Buchholz be able to make adjustments?

Of the six starters that may make multiple starts in this series, Buchholz's Game 2 start was the only real clunker the first time around. The discouraging part for the Red Sox is that nothing seemed to be working for him. Of the six types of pitches he threw -- four- and two-seam fastball, curveball, changeup, cutter, and splitter -- Tigers batters were able to turn five into base hits. A big reason for this was Buchholz's location. As you will see below, he caught way too much of the plate in that outing. 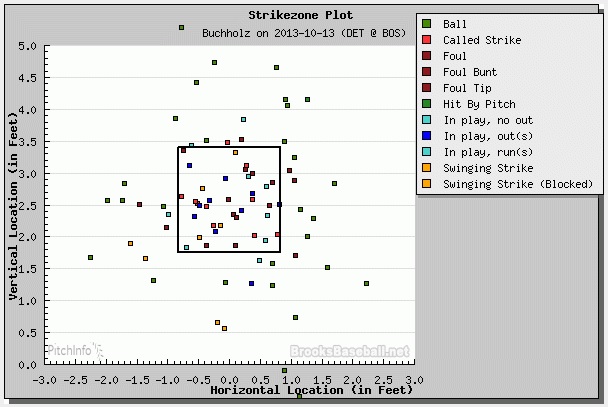 Once again, the Tigers are faced with a "win or go home" scenario. Last time, they responded by beating up on the Oakland A's in an 8-3 romp. Unfortunately, they don't have the luxury of starting a comeback at Comerica Park this time around. The good news is that the Tigers offense was able to hit Buchholz in Game 2. They were one pitch away from winning comfortably, and unlike Anibal Sanchez, there was no "yeah, but..." aspect to Scherzer's first start of the series (other than the bullpen implosion, that is).

The Tigers force a Game 7 in yet another one run game.