As if his play wasn't enough to frustrate Tigers fans in the postseason, Prince Fielder's flippant words sent that disagreement to a new level after the Tigers' championship hopes came to an end Saturday at Fenway Park.

That actually seems like rather a level-headed response. There's a certain level of maturity to it, a man keeping his priorities in check. Family first, job second. Some people reverse those priorities. Their kids may only know them from a distance, and they, like Fielder, may find themselves in divorce proceedings. Keep that in mind. It's an important point. Fielder's kids can serve as a centering point to him in a life that has seen recent tumult. To say after a tough loss and disappointing postseason that he wants to spend time with his kids, that there's more than baseball, that's only human, and it's not something anyone should bash.

But now contrast it with the words spoken by Torii Hunter, whose infamous image, feet in the air as he splayed over Fenway Park's right field wall desperately trying to catch David Ortiz's grand slam ball in Game 2, may first appear humorous but instead shows the lengths Hunter was willing to go for a chance to win a World Series ring.

"This is the postseason. I'd die on the field for this. You're not going to take me off this field," ESPN quotes him as saying when asked how he felt after the tumble And after the series was over, Hunter again showed emotion. "This is a crushing blow. It hurts," he said, per Matthew B. Mowery. 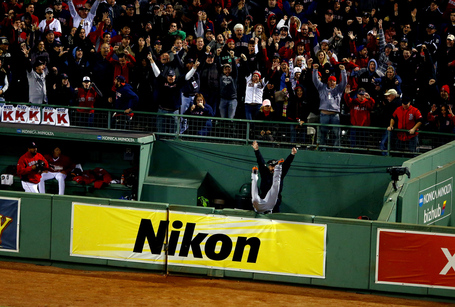 As fans, we care. We care a lot. We pour our money into tickets, souvenirs, travel. We spend hours committed to it each year, going to the ballpark, watching on television, studying the stats, reading (and writing!) opinions, listening on the radio, discussing the season with others. Fans are committed to their teams, typically a lifelong commitment that outlasts not just players who leave for free agency, but players who begin their careers as a rookie, spend a career, and eventually retire from the game. That level of commitment from sports fans to their teams is simply incredible.

Naturally we want to see our players care that much, too. That's why we naturally gravitate toward Hunter. He said he'd die on the field to win a title. That's dramatic. That's desire. That's commitment. That's what we want to see out of our ballplayers. And it's also exaggeration, as Hunter would surely admit.

Remember that Hunter isn't a lone wolf, laser-targeting a ring and disregarding everything else in life. He's a family man. It's said he picked the Tigers, among other teams inside a championship window, to be closer to Torii Jr., who decided to play college football at Notre Dame. Having a family isn't easy when you're a professional athlete. You travel -- a lot. You have to spend countless hours away at hotels, or when home keeping your body in peak shape, practicing to keep your skill level high or serving other professional commitments. You start early and leave late. If anyone among us knows what Fielder meant, it's probably Hunter.

And maybe he's mad today, or maybe he's not bothered at all. We don't know. We could take Fielder's quote and paint him as another out-of-touch millionaire -- $214 million guaranteed contract, he's got his, right? His numbers have already suffered since coming to Detroit. But that seems intellectually dishonest to me at best and completely clueless at worst.

What we can say with honesty is that his choice of words, his posture to the question, was wrong for the moment. You've just come off a second disappointing postseason after a disappointing year, Prince. It's commendable you want to be there for your family. We all want that, too. But what we were looking for at that moment was a little more regret, a little more disappointment, a little more emotion, a little more fight. We know how to separate baseball from "real life." But we're fans. We care. We just needed you to show you care a little bit, too, and you didn't do that.

Fielder returned to Detroit a hero a little less than two years ago. Fans could not wait to see him in the Old English D, to see him representing them at Comerica Park. Two years in to a nine-year deal, thanks to falling home run figures and two postseasons he's gone missing, the honeymoon is officially over; the excitement has past, the boos have begun at Comerica Park. This relationship is now in need of a little work. Fielder's priorities may be right, but his choice of words would only drive the beginnings of that wedge with fans deeper.

If this ever going to work out, ballplayer and fans tied together in a nine-year relationship, Fielder's going to have to put in a little more work into it. And if he doesn't, it's hard to see this ending in any way but further contempt -- from both sides.