Groin Strains 101: How will Miguel Cabrera be affected by his injury?

So your superstar third baseman has a groin strain...

Share All sharing options for: Groin Strains 101: How will Miguel Cabrera be affected by his injury?

Somewhat lost among the shocking news that Jim Leyland would not return for the 2014 season was Dave Dombrowski letting the public know just how injured Miguel Cabrera was during the end of the 2013 season. According to Dombrowski, Cabrera was diagnosed with a Grade 2 or 3 groin strain that may require offseason surgery.

First off, let's get our vocabulary down. The words "strain" and "tear" may both be used by the media to describe Cabrera's injury. In the medical world, these terms are interchangeable. A strain is a tearing of the muscle fibers, and the grades -- ranging from one to three, from least to most damaged -- are used to describe the severity of a tear. The groin muscles, or hip adductors, are located on the inner part of your thighs. Their primary action is hip adduction, or bringing the knee towards and/or past midline, but they are active during just about all leg movements. 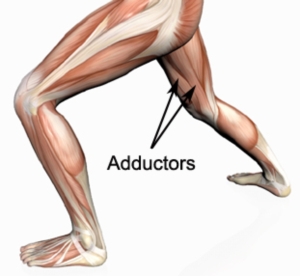 Now that we know what Cabrera was dealing with over the past couple months, it's no surprise that he was hobbling around the field so much. Even mild groin strains can make running very difficult, and quick change of directions -- such as when your third base coach puts up a late stop sign when you're running at full speed -- can be excruciating. The hip rotation required for a baseball swing can also be painful, limiting his power at the plate. Cabrera's trademark opposite field power, in no small part thanks to his powerful legs and hips, was sapped by the injury throughout September and the playoffs.

The determination on Cabrera's need for surgery will be made by Dr. William Meyers, a core musculature specialist based in Philadelphia. Cabrera did not initially want to see Dr. Meyers, but later agreed to when the team was in Miami. Bleacher Report writer Will Carroll noted that Dr. Meyers was a "sports hernia specialist" on Twitter, but this does not necessarily mean that there is more going on here than the Tigers have let on; Dr. Meyers would be involved for an abdominal strain, sports hernia, or groin strain.

Will Cabrera need surgery? That part will be difficult to answer for those with access to Cabrera's medical records, so I'm not even going to pretend to have any idea. If he does have surgery, I would imagine that the organization will rehab the injury fairly conservatively, but there is no reason to expect that Cabrera won't be 100 percent by Spring Training. The only possible way we see Cabrera hobble into 2014 is if he tries to rehab the injury first, but needs to undergo surgery later on this offseason.

•Who should be the next Tigers’ manager?

•A farewell to Leyland

•Our favorite things about Leyland