BYB has developed its own measure for determining the quality of the Tigers' managerial candidates this offseason. Our first target? Brad Ausmus.

Las Vegas has deemed Brad Ausmus as their early favorite to succeed Jim Leyland as the Tigers' manager. This comes as a bit of a surprise, given Dave Dombrowski's comments when Leyland announced his retirement, but Ausmus seems destined to be in someone's dugout next spring. Let's see how he rates on our scale.

Likelihood of bunting: 7 out of 10 LEYLANDS

Ausmus has never managed at the big league level (or any level), so we can't look back at his actual managerial record to see how often his teams bunted -- not that we would do that anyway. However, he had 82 sacrifice hits in his 18 year career, an average of 4.6 per season. This seems like a lot for a catcher, so we're going to assume he would bunt pretty often.

Baseline 5; +1 for He's not Leyland!; -1 for But he still has Leyland's bullpen; -1 for Fans clearly know how to run a bullpen better anyway; +1 for Wait...; +1 for Are you gonna tell this guy he's wrong? -1 for Rookie managers clearly don't know how to make pitching changes (Hello, Bo Porter).

The search term "Brad Ausmus ejected" delivers zero Youtube videos of Ausmus even getting mildly upset at a teammate or umpire. However, MLB has this video of Ausmus getting ejected back in 2008. Ausmus doesn't get a fair shot at giving the ump a real piece of his mind -- and the ejection seems like #umpshow more than anything -- but at least we know he has a pulse. 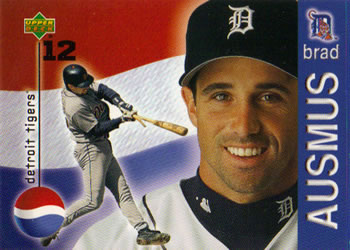 Normally a 1 out of 10, but he gets points for the uniform.

Ausmus doesn't have a mustache, but he seems to have Alex Avila's stubble (maybe it's a catcher thing?) and could probably rock a decent one if he tried hard enough.

Ausmus scores low on our scale, but his lack of ridiculous pictures on the internet and unwavering refusal to grow any facial hair hurts an otherwise strong candidacy to be the next Tigers' skipper.