He's a little busy at the moment, but Boston Red Sox bench coach Torey Lovullo is one of the popular candidates to become the Tigers' new manager. His current team is tied 1-1 in the World Series, but how does he rate on our LEYLAND scale?

Likelihood of bunting: 3 out of 10 LEYLANDS

The Red Sox had the fourth fewest sacrifice hits in the American League this season. Only saber-minded Oakland and Tampa -- as well as the White Sox, who just never had anyone on base -- had fewer.

There aren't any videos of Lovullo getting tossed, but David Ortiz did this to a dugout phone on Lovullo's watch earlier this season. 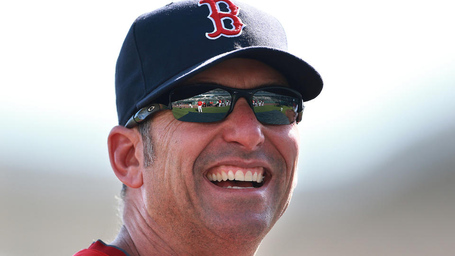 One of his players grew one once.

Another weak score in what is turning out to be a pretty steep curve, Lovullo's score could change if we knew a little bit more about him. What are his favorite pizza toppings? Does he like dags? What is his favorite song on the radio that hasn't been overplayed a gazillion times yet? This is the type of hard-hitting analysis that we will soon figure out if Lovullo gets the job.