Dodgers third base coach Tim Wallach came out of nowhere to be a legitimate candidate for the Tigers' manager job, so we have to do a legitimate analysis of his qualifications.

Late last night, reports came out that Dodgers third base coach Tim Wallach had interviewed for the Tigers' managerial opening. Who is Tim Wallach? As you will see below, he's definitely no Jim Leyland.

Likelihood of bunting: 9 out of 10 LEYLANDS

In the 16-team PCL, Wallach’s Isotopes laid down the 2nd most sacrifice bunts in 2009 and the 4th most in 2010. On defense, Albuquerque issued the 6th most IBBs in 2009 and ramped up to the 2nd most in 2010. Note that PCL teams averaged 5.1 runs per game during Wallach’s two years. Thus, without supervision, look for TW to go even more to the sac and IBB strategies in the lower scoring American League environment (4.3 R/G last year).

One caveat to the caveat: PCL rules allow for pitchers to bat when both teams are National League affiliates and agree to have pitchers hit, so the Isotopes had more bunting opportunities than American League affiliates.

Bullpen management: 4 out of 10 LEYLANDS

I honestly have no idea how to rate him here, so I gave him a 4 to make my math easier for the summary. Given how long it took the Dodgers to realize Brandon League wasn't very good, it seems like a fair score.

There aren't any videos of Wallach getting ejected or otherwise making umpires sorry they chose to come into work on that particular day, but he gets a point for this.

Even a point for the Expos uniform would be stretching it here. 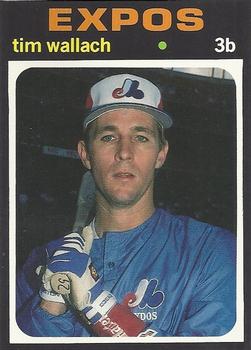 He has been clean shaven for most of his career, but the potential for an epic mustache is there.

A fair score for a candidate out of left field. His mild mannered tendencies and lack of Youtube-worthy ejections hurt an otherwise impressive resume.