Baseball by the numbers: simulation games and lessons learned

The logic of math and the luck of the dice can teach us a lot about baseball, and also about saying bad words.

Share All sharing options for: Baseball by the numbers: simulation games and lessons learned

Next to watching baseball, one of my favorite activities is to play baseball. Now, by "play baseball," I obviously do not mean actually picking up a glove and bat and physically going out to a ball field. That would be reckless, because, as someone who is no longer 16 years old, I have to be careful of engaging in strenuous activities that might cause injury, such as attempting to tighten the straps on my glove (I was out for 45 games with a UCL tear after that injury).

No, by "play baseball," I am referring to the playing of simulated baseball. There are many options to choose from here:

In this last category, I will admit that I only know of one option: Strat-O-Matic. This board game is popular for its heavy reliance on actual baseball statistics, which makes it one of the most realistic and accurate simulation games available. This sets it apart from baseball video games, in which even a player like Don Kelly can regularly go 4-4 with three home runs, and "fantasy baseball" leagues, in which participants must either be able to provide legal proof of their virginity, or be able to consume upwards of five cases of beer per day.

I was first exposed to Strat-O-Matic in the late 1980's, when my dad decided to surprise me by bringing the game home after work on a Friday night. He had played it in his own childhood, and wished to pass along the experience to me.

We opened the game and immediately set about the task of unwrapping, folding, and tearing an estimated six metric tons' worth of perforated player card sheets (my dad was afterward placed on the 60-day DL with elbow strain and multiple paper-cut injuries), carefully organizing them into team stacks, and rubber-banding them. After multiple presidential administrations had come and gone, we were ready to actually begin playing the game. I will never forget the experience of that first foray into the realism of Strat-O-Matic baseball.

I chose the Oakland Athletics as my team, because I was thoroughly enamored of Jose Canseco and Mark McGwire, the famous "bash brothers." I happened to be young enough and naive enough at the time that I wasn't aware of such things as steroids, or the fact that Jose Canseco had so much juice in his veins that he could have won the Kentucky Derby on foot.

My dad chose the Detroit Tigers, of course.

To fully appreciate the experience of what transpired that night, I have to explain a bit about how the game works. Every batter has a card with three columns, numbered 1-3; every pitcher card has three columns numbered 4-6. When it is your team's turn to hit, you roll a single white die and two red dice; the white die number (one through six) dictates whether your result will come from the batter's card or the pitcher's card, and the value of the two red dice dictate the actual result. So, for example, if my batter is Miguel Cabrera, and I am lucky enough to have the white die showing a one, two, or three, I will check the appropriate column on his card, check the sum of my red dice (let's say, nine), and - yes, there it is - a double!

These cards are so advanced, however, that they actually print two versions of each "results columns," one each for lefty/righty matchups. Phil Coke's pitcher card, for example, has two sets of "4-6" columns, a blue column for when he is facing a left-handed batter, and a red column for when he is facing a right-handed batter. The red column is absolutely riddled with bad results like "walk," "double," "home run," and "Player demoted to Toledo, please burn this card and fire yourself immediately."

Additionally, there is a 20-sided die that very frequently comes into play. Many of the player cards' results will say something like "HOMERUN 1-6, DOUBLE 7-20," or more dramatically, "TRIPLE 1-3, FLYOUT 4-20." In this case, you have to roll the 20-sided die to see what the outcome will be. This adds to the drama of the game, knowing that there's a fly ball in the air, and - until that 20-sided die is rolled - it might result in an extra-base hit, or it might result in your dad saying a lot of bad words.

As if all of this weren't enough, there are several player card results that say something like "GROUNDBALL (SS) X." The "X" means that it is time to quit playing the game and go watch baseball on TV, because it has now taken 73 rolls of the dice just to find out what this one batter's outcome will be.

Seriously, though, the "SS" means it was hit to the shortstop, and the "X" means that you now have to look at the shortstop player's card, find his defensive rating, whip out the Strat-O-Matic "Fielding Chart," and roll the dice again to see if the shortstop will make the out, make an error, or simply let the ball get by for a clean base hit (also known, in the Strat-O-Matic world, as "Doing the Peralta").

Phew! As you can see, this game is very in-depth, and while it provides an incredible level of accuracy and realism, a single game can also take longer to play than an actual 162-game season, so I would definitely recommend only playing it while waiting in line at the DMV, or between Daisuke Matsuzaka's pitches.

Believe it or not, I haven't even begun to scratch the surface of Strat-O-Matic's "Advanced Play" options, let alone the "Super-Advanced Play Options," where outcomes are dependent on whether or not to hold the runner, whether or not to bring the infield in, and what the weather conditions are like. (I swear to you, I am not making this up.)

In many ways, though, Strat-O-Matic is like a real baseball game. Unlike a video game where your batter might be an Italian plumber who jumps on turtles in order to save a princess, Strat-O-Matic is a game of lengthy pauses and strategic moves, much like actual baseball. It is a game where lineup order matters, where team defensive rankings influence games, where platoon splits have an impact, and where the luck factor makes the unthinkable happen from time to time. Playing Strat-O-Matic is so realistic, in fact, no other baseball simulation game gives you the incredibly accurate experience of what it would be like to manage a professional baseball team via the difficult method of rolling dice.

If nothing else, Strat-O-Matic gets you very deep inside the numbers of baseball, and teaches a lot about how much baseball math really does matter. I'd always heard a lot about how Don Kelly gets a lot of walks against left-handed batters, but it wasn't until I saw his Strat-O-Matic player's card that I truly understood this dimension of his presence at the plate. Seriously, take a look at his player's card: 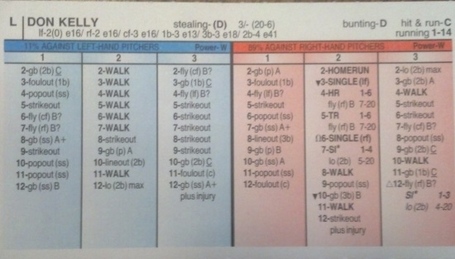 Perhaps this is what led my own 9-year-old son, upon his first introduction to Strat-O-Matic a few weeks ago, to insert Don Kelly in the starting lineup at second base, in favor of Omar Infante. Shocked, I said, "Why would you do that? Infante has much better hitting stats!" Calmly, and channeling the spirit of Billy Beane, he said, "Don Kelly gets walks."

Incidentally, he and I played a simulated World Series, using the 2012 Giants vs. the 2012 Tigers. The Strat-O-Matic cards drove home four points to me that I had not fully grasped about the 2012 World Series:

In the end, our simulated 2012 World Series was a very close call, but it ended with a 9th inning walk-off double for Prince Fielder, giving the Tigers a narrow 8-7 championship win. How badly do we need a smooth-hitting Fielder in the playoffs? Based on the number of bad words I said when my son won the simulation series, I'd say "A LOT."

So back to the late 1980's, when my dad and I squared off for our first Strat-O-Matic simulation game. How did that turn out? The two teams battled into the 12th inning, when, with two outs and a runner on second, and Jose Canseco at the plate, I rolled a "2-8" combination. I looked at the result line on my Canseco player card: "HOMERUN 1-7, FLYOUT (LF) 8-20." I grabbed the 20-sided die. I rolled it.

After consulting the "Frustrating Loss" chart provided by Strat-O-Matic, my dad rolled the dice and said lots of bad words.