Phil Coke is indispensable. Here is why.

Share All sharing options for: 25 reasons the Tigers absolutely must keep Phil Coke

Phil Coke, Tigers bullpen Übermensch, is coming off a bit of a rocky season. It was a season which featured a 5.40 ERA, a WHIP of 1.67, and a trip to Toledo. This puts his status with the team in a bit of a precarious position. To quote Patrick's latest article, Phil is "hanging by a thread'. Here is the situation:

After five seasons in the major leagues, Phil Coke is eligible for arbitration one more time. He earned a salary of $1.85 million in 2013 and stands to get a raise to more than $ 2 million for 2014, perhaps up to 2.5 million if the Tigers choose to offer him a contract by December 2nd.

So there is the question before us: Should the Tigers keep Phil Coke?

The answer is: Hell yes.

1. He's still relatively inexpensive: Sure, 2.5 million sounds like a lot, but the league minimum is $500,000, so Phil is only an extra 2 mil. Plus, as a percentage of total payroll 2 million is a bargain! As a percentage of GDP it seems even smaller! (This logic works for politicians all the time)

2. He does a killer Miguel Cabrera impression

3. The Tigers could opt to "Boesch" him: Remember what the Tigers did to Brennen Boesch last year? If the Tigers cut him before March 15 they are only on the hook for 1/6 of his salary, a cheap price to see what he's got.

4. We're short on lefties: Darin Downs was claimed off waivers by the Astros. Drew Smyly might go into the rotation. Who else do you want? Schlereth back?

5. Phil is not a pretty boy: Phil is from California, but not the wussy part of California. He drives a truck and listens to Nickleback. HE'S A MAN OF THE PEOPLE! 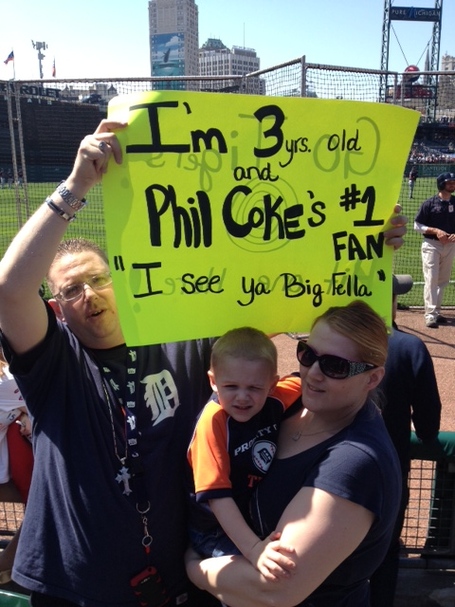 6. Who else will troll beat reporters?: Remember the time Phil challenged Tom Gage to a wrestling match? Phil is also the master of feigning emotional injury at comments directed his way. Actually, maybe he isn't faking and he really is hurt? Gosh he's good. Someone's got to keep these guys on their toes.

7. His stuff is still there: His average fastball last year was 93.4 MPH, faster than his career average. After extensive review of Coke's Pitch f/x data on Fangraphs.com I got frustrated and gave up. BUT I'M SURE HIS STUFF HIS THERE, HE'S PHIL FRICKIN' COKE.

8. He helps the defense by pointing out flyballs

9. Lots of guys have off years and bounce back: I could support this assertion with fancy things like "examples" and "statistics" but you know it's true.

11. Anti-bullying is especially important these days: With all this Richie Incognito drama don't we need a crusader against bullying? Phil Coke is that man.

13. Are you going to pass up these faces?

14. He fights forest fires: True story. In the off-season he clears brush on his property to stay in shape and prevent fires. Smokey the Bear was wrong, only you AND Phil Coke can prevent forest fires.

15. Phil Coke is a good quote: As evidenced by such classics as:

"Aside from the stuff I haven’t been diagnosed for yet, I don’t have a problem."

"He’d save your life if he had a chance." On Alex Avila for All-star

On thinking: "I don’t typically try to do any of that anyway, it’s kinda dangerous" – via Matthew B. Mowery

16. He has post-season experience: And he ain't scared. Just ask Raul Ibanez. 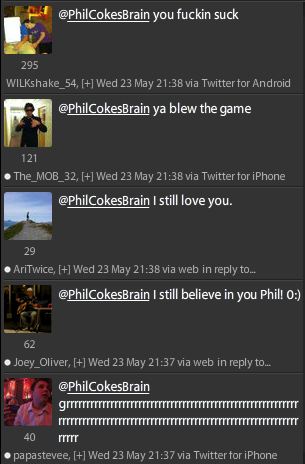 19. He's always at outings and events: Need an appearance at a pawn shop, fundraiser, promotional event, or at a Dunkin Donuts? Phil is your man.

20. He hates the Yankees

21. Come on, it's just money! Sell a few more pizzas! (That's the answer for everything)

22. This shirt kinda looks like a bird pooped on it

23. His elbow has had time to heal: I don't know exactly how big of a deal this was, but it was enough to keep him from pitching early in the playoffs. Maybe a rejuvenated elbow has him mowing guys down like the grim reaper again. 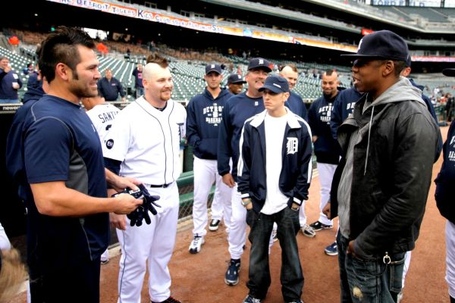 Here he is with a mohawk talking to Eminem and Jay-Z. No word if Phil is asking Hova to try to get him 310 Million dollars.

25. Emo Phil: You can't say Phil Coke doesn't care. He's pissed when he screws up. He sometimes apologizes to fans and to his organization. Alex Simon refers to this as "Emo Phil". It's obviously about more than the money for him, so GIVE HIM SOME MONEY!

There you have it, 25 terrific reason why we NEED to keep Phil Coke. NOW GO DO IT #DUMBROWSKI!