Prince Fielder trade: Mourning the end of something special

Yet again, the heart and the mind disagree.

Share All sharing options for: Prince Fielder trade: Mourning the end of something special

No matter whether you think trading Prince Fielder to the Rangers for Ian Kinsler made baseball sense, it's hard to come away from the decision without feeling at least a little sense of sadness that it ended this way. Even while you list reasons Dave Dombrowski's masterful surprise was the best move for the Tigers -- financial flexibility, improved infield defense, a little added speed near the top of the order, more options open for what come next -- a feeling of loss persists. The Tigers found a way out of a potentially franchise-damaging contract; and, if not making themselves better, they probably didn't get much worse for it. But this wasn't even close to what we imagined on a winter day in Janaury.

Not two years ago a city celebrated when its legendary son returned: Prince Fielder, whose mythology began with a batting practice home run into the right field overhang at Tiger Stadium -- as a 12-year-old. Prince Fielder, who played Little League in the suburbs while his famous father crushed balls at the corner of Michigan and Trumbull. Prince Fielder, whose dad gave a generation of fans a reason to cheer when night after night he hit towering home runs while making a run to the then-unfathomable 50 home run plateau. Cecil Fielder was eventually traded by the Tigers, too, for some the first notice that baseball is at its heart a business.

With Prince we had another shot, a chance to relive memories, maybe with a new generation of fans, but confident this time it would turn out better. These Tigers could win a World Series, and though Prince might not be the team's only superstar he represented an emotional tie to our fanhood that no other player the Tigers acquired could possibly be.

So it felt pretty special the day he put on that Tigers jersey the first time, when a crowd gathered at Comerica Park for a true celebration. Tigers owner Mike Ilitch came out. Fielder's agent, Scott Boras, flew in. Fielder's entire family, a wife and two wonderfully cute kids, posed for pictures as the media swarmed around Prince, eager to record his thoughts on the day he was all but handed the key to the city.

Detroit isn't Hollywood; and real-life endings aren't all of the theatrical feel-good kind. Months later Prince Fielder's bat, like the bats of many of his teammates, disappeared in the 2012 World Series and we could only watch with broken hearts as another team was crowned champions. A year later, Fielder again failed to make a difference, no booming home runs bringing the Comerica Park crowd to its feet but instead leaving us a lasting image of being caught in a rundown and plummeting to the earth shy of the safety of third base. And we know, too, the fairy tale fell apart in Prince's personal life, too. Divorce proceedings began less than a year and a half after the family portrait of four smiling Fielders dressed up in their Tigers best. And today, that boy who wowed us in his youth, whose return home we celebrated, is no longer a Tiger. 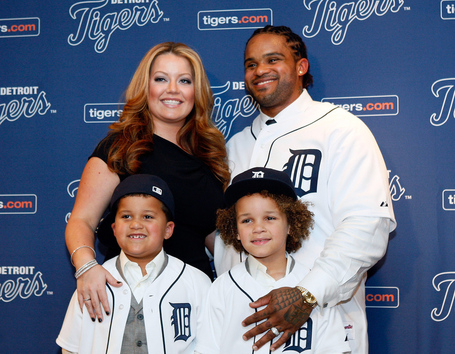 It's easy to look at baseball for the business that it is. It's simple to pour over the statistics and the salary tables, to declare whether a transaction adds a piece of the puzzle the team needs or if it made financial sense for all involved. And it's often said that what fans truly root for is the laundry: players change, they get traded, they leave on their own accord, but what they represent when they wear our team's logo on their chest is what matters most. In some ways that's all true. A World Series title is a World Series title; we would look upon it fondly no matter what group of players brought it to us. Now we lose the chance to process it through the kid we watched grow up.

At its intellectual core, the deal that brought Prince to Detroit was a business decision. For Prince, it represented a chance to set his family up for life, and he was unlikely to receive such a large financial offer from any other club. For the Tigers, it brought a big bat to the middle of their batting order during a time the World Series window was open wide, and it also gave the team another star attraction who would bring fans to the ballpark. In the end, Prince's decision to waive the no-trade clause, allowing him to play in a much more hitter-friendly park and to get away from fans who were beginning to turn against him, and the Tigers' decision to trade him for "financial flexibility," showed that it was in everyone's best interest to move on. The numbers won out, as they often do.

Beyond the numbers though, you can't help but feel a little regret at what was left undone when all the excitement of the beginning began gave way to misunderstandings and hurt feelings at the end. The potential for something wonderful was there in front of us, and today it's gone. Even if just for a moment, that is  a loss worth mourning before we move on.

•Prince traded! | Implications | You weigh in