The consensus view from our rival blogs is the Tigers made out damn well, which does not bode well for the playoff chances rest of the division. Wild card, here they come!

What this trade really works out to is losing Prince Fielder in exchange for Ian Kinsler and whoever else they can get with that $76 million. That's a huge win for Detroit. That money might be the difference between extending Max Scherzer and letting him walk in a year, or it might allow them to bring in a good corner outfielder and further solidify their roster in 2014.

This trade is not good news for the Indians, not in 2014, and not beyond then either. 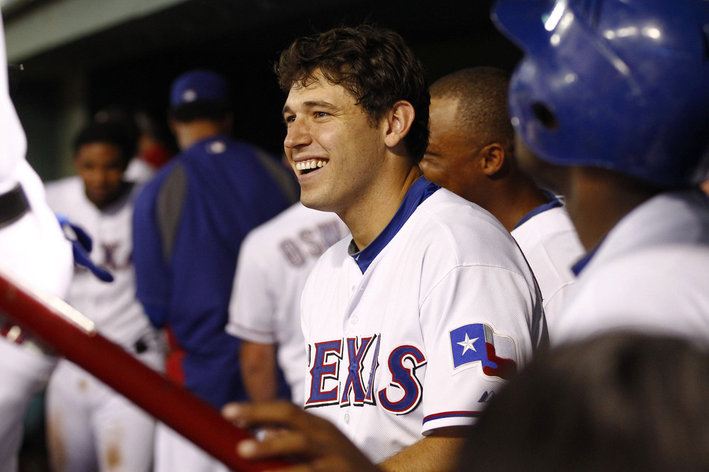 Kinsler was one of the players who is on the short list with players like Buddy Bell and Hank Blalock. Guys who, for whatever reason, I especially rooted for, who I really appreciated and wanted to see do well.

The commenters at LGT were complimentary of the deal as well.

"It also makes it easier for the Tigers to tear the team down after next year if they feel Cabrera is declining and not worth an extension and if Scherzer isn’t pitching up to snuff or Verlander starts to decline. I think that was at least part of the calculus here, albeit both fairly remote probabilities."

"I’m highly doubtful the Tigers are thinking of tearing down the team. They are a good collection of talent. Even if Cabrera has a down year or Verlander is off a bit they are not going to burn it all down."

"I doubt they want to tear it down, but this gives them more flexibility to re-tool, or to extend Scherz."

After the success the Tigers have had with former Tribe players Victor Martinez and Jhonny Peralta, there's also fear at LGT the trade could free up cash to sign another former Indian.

"I fear that this is the trade that clears the way for another LGFT to join the Tigers. One whose name rhymes with "Chin Too Shoo.""

Craig Brown of Royals Review echoes LGT when it comes to the Tigers' gaining long-term benefits, while praising Dave Dombrowski.

The Tigers have freed up a considerable amount of payroll and will always spend money anyway. They are in position to pursue someone like Jacoby Ellsbury or Shin-Soo Choo. Dave Dombrowski knows what he's doing. He has a plan. And he's usually able to execute. That makes me very afraid.

How does the deal affect the Royals? Not much, actually.

In a nutshell, this isn't a gain for the Royals. Kansas City had a ton of work to do anyway to catch the Tigers. I just don't see this making a difference either way. With Ervin Santana departing for greener pastures (greener as in money. Get it?) the Royals are a weaker team today than they were at the end of the season. You can't say that about the Tigers. The Tigers are still the team to beat in the Central and they now have some payroll flexibility to either extend a current player (i.e. Max Scherzer) or they can spend some cash on the free agent market.

In a huge reaction thread, the commentariat at Royals Review was not at all happy.

"This is a total steal for the Tigers
They relieve a huge amount of payroll obligation even with sending $30 million with Fielder, which will allow them to shore up other holes in their team and/or resign Scherzer, Verlander, or Cabrera. Meanwhile, they also get a major upgrade at 2B."

"Reaction from a Royals fan regarding Kinsler for Fielder?
F***."

"They got probably an equal player over the next 4 years, for less money, and got rid of what is likely $60 million of dead money in years 5-7."

Of course, this led to bashing of the Royals' brain trust, owner David Glass and GM Dayton Moore, who pale in comparison to free-spending Mike Ilitch and the wizardly Dombrowski.

"Ilitch and Dombrowski are so so so much better than Glass and Moore
It’s not even close. And that is why the Royals have no shot at winning the central for the foreseeable future. Change ownership or GM and the Royals have a shot. Until then, we’re royally f****d."

"What I was expressing (which I think is pretty clear from reading the words and not flipping out at the tone) was that owners and GM’s are extremely important for an organization and the team at the top of the hill in the Royals division is much better with regard to both positions than the Royals and that puts the Royals at a horrible disadvantage in the division."

"This move is not the end of the world for the Royals, not did I claim it was. But the fact that the Tigers owner and GM are much better at their jobs than the Royals owner and GM means that the Royals are pretty well screwed with regard to winning the division until some of those personnel change, IMO. That continues to make it hard for the Royals to get to the playoffs. And that sucks."

Honestly, Royals fans have more pressing issues to worry about. Such as Thursday's "major baseball announcement," which turned out to be the signing of starting pitcher Jason Vargas to a four-year deal. Giving a multi-year deal to Vargas as a replacement for Ervin Santana didn't go over well.

I mean, the Royals are trying to actually reach the postseason in 2014, right? Unless something completely unexpected happens, James Shields will be pitching for a new team in 2015, leaving the team without a clear top-of-the-rotation pitcher. The window for reaching the playoffs is now, and Vargas barely moves the needle in the correct direction.

At South Side Sox, Jim Margalus says it's all about the money. The Tigers' having drastically improved their infield defense (if Miguel Cabrera moves to first, as expected) is a major plus.

On top of that, Kinsler's a good glove at second, and Miguel Cabrera probably can play a far better first than what Fielder showed last year. Throw in Jose Iglesias for Jhonny Peralta and any third baseman with a pulse over Cabrera, and that's a drastic infield overhaul since late July.

And now with the specter of Fielder's albatross eliminated, the Tigers now can splurge on a contract that didn't seem available to them before, whether it's a Max Scherzer extension or something else.

"Not cool! Castellanos to 3B at league min
Scherzer signed. Not cool. Well done Dombrowski, you infernal f******e, well done."

"Here’s hoping verlander really is on a downslide.
Also, i am suddenly more of a fan of the second wildcard spot."

"I so wanted some Tigerfreude in a few years with this contract."

"The lineup probably isn't done
And they no longer are a joke on defense, which also matters."

"We'll miss all those times we were able to bunt down to third against Detroit. "

Though some think the Tigers will spiral into irrelevance without Fielder.

"i think you're wrong. this move will hurt them more than help them in the present.
unless they got some other big moves cooking.
But look at the lineup. It’s a hell of a lot less scary looking.
Jackson- major struggles
Hunter- even older
Cabrera- best in the world pitch around him
martinez- older
kinsler- slipping badly with terrible stats out of texas
castellanos- unproven
iglesias- glove only"

Being I love any dig at MLB Network's Harold Reynolds (who is supposedly the lead candidate to replace Tim McCarver on FOX), I had to include this nugget from SSS...

"according to harold reynolds there is no doubt texas won this trade."

"With his mother, that makes two. "

•Prince traded! | Implications | You weigh in

•Miguel Cabrera misses Prince already | So do we